On Feb. 15, 2015, American Express (NYSE:AXP) CEO Ken Chenault announced that the company was walking away from its co-branded credit card partnership with Costco (NASDAQ:COST). The market responded immediately, sending the stock down 6%. This month, as Costco completes its transition to Visa (NYSE:V), American Express' stock has continued its downward spiral. Amex stock today is down over 21% since the announcement.

Blame for this fiasco is squarely on the shoulders of American Express management. The company knowingly created large customer concentrations, ignored the risks of this overreliance, and ultimately erased over $40 billion in shareholder value as key customers walked away from the company over the last 18 months.

When American Express first disclosed the end of its Costco partnership last year, management told shareholders for the first time that 10% of the 112 million American Express cards in circulation were co-branded with Costco. For a company of American Express' size and sophistication, that is a shocking concentration to have in any one customer.

An analyst at Credit Suisse dug deeper into American Express' numbers and calculated that 23% of Amex card spending was done on co-branded cards. The market immediately questioned if those customers were loyal to American Express, or were they choosing to spend because of loyalty to Delta (NYSE:DAL) , JetBlue (NASDAQ:JBLU), Starwood Hotels (NYSE: HOT), or another co-branded partner.

The risk of an over-reliance on a few critical customers is that those customers could one day walk away, taking a huge percentage of revenue with them. Or, in other words, the risk is exactly what happened when American Express and Costco parted ways last year.

The breakup with Costco was just the start of the trouble in American Express' co-branded business. Things went from bad to worse soon after when JetBlue, another major co-brand partner, announced they'd be moving their card business from American Express to MasterCard (NYSE:MA) and Barclays. In January of this year, the exodus continued when Fidelity jumped ship with its co-branded card to Visa.

Losing these partners has had a major impact on the company's revenues, as one would expect with the high concentrations described above. After five years of steadily increasing quarterly revenues, American Express has struggled to maintain revenues since the Costco announcement, much less find growth. Since its peak in the 2014 fourth quarter, American Express' quarterly revenue is down nearly 11% as of March 31.

The market has responded in kind. The stock is 35% off its all-time highs from 2014. 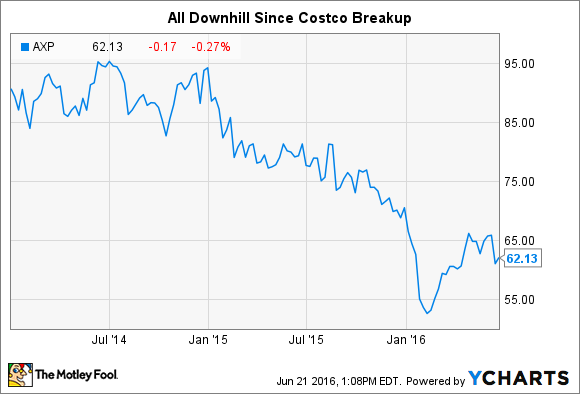 American Express' management allowed the company to become far too reliant on just a handful of co-branded card partnerships. The gains from that strategy have proven ephemeral, overcome by the concentration risks it created. Those risks persist today, even after losing Costco, JetBlue, and Fidelity.

Starwood Hotels, another major co-branding partner, was acquired by Marriott in April of this year. Marriott currently partners with JPMorgan Chase for its co-branded credit cards, giving the megabank an inside track to take the Starwood business away from Amex when its contract is renegotiated in 2018.

Trying to find a silver lining in this co-branded mess

Walking away from Costco has been a tough experience for American Express and its shareholders, but all hope is not lost.

Despite the problems on its top line, American Express' financial statements remain strong. The company is profitable, reporting 25% return on equity for the 2015 fiscal year. That beats Visa's 22.1%, but trails MasterCard's incredible 59%. It's balance sheet is well positioned from both a liquidity and capital perspective. The company generated $2.2 billion in free cash flow last quarter, more than Visa and MasterCard combined.

Furthermore, American Express is still a favorite of the highly sought-after high-net-worth clientele, even as competition has stiffened for this demographic in recent years. A Nilson Report, for example, found that American Express customers spend on $144 per purchase on average, considerably higher than the $84 average on Visa cards and $90 at MasterCard.

The company successfully re-signed its largest co-branded airline partner, Delta, to a six-year extension in late 2014. This is a clear win in the short term. However, it does nothing to alleviate American Express' heavy dependence on a few co-branded partners. Delta co-branded cards accounted for about 5% of card spending before the Costco partnership collapsed. That concentration is likely higher today, as total spending declined without Costco's impact.

A problem of their own creation

All companies must find ways to diversify their customer base and mitigate customer concentration risk. American Express ignored this fundamental principle and has suffered as competitors poached those key customers one after another.

That's bad management, whether the company is a small mom-and-pop shop or a multinational powerhouse like American Express.