When Fitbit (NYSE:FIT) purchased a smartwatch company for its developer platform, it had the final puzzle piece to build its "ultimate health and fitness smartwatch." It has attracted an active development community to make its smartwatch more attractive to users. But this fitness tracker company has a grander vision: "To make everyone in the world healthier."

In December 2016, Fitbit bought the leftovers of Pebble, and has used its software development kit (SDK) to power the newly released Ionic smartwatch. The SDK allows programmers to access all of Ionic's sensors, such as its heart rate sensor, altimeter, blood oxygen sensor, and a number of others. It can also capture user activity and display information or other images on the watch face. Tom Hudson, Fitbit's vice president of investor relations, told The Motley Fool in an email exchange that "a key part of [Fitbit's] app strategy is to utilize standard web technologies to make it easy to create applications."

The apps released on the Ionic give you an idea of the capabilities of the developer platform. In addition to basic fitness tracking apps, the watch adds Pandora (music), Starbucks (payment card), Strava (the "leading social network for millions of athletes"), and a number of others. These apps are starting to fulfill the first of two goals CEO James Park laid out when Pebble was purchased: to help make Fitbit's products more attractive to new users.

And while there's only a handful of apps available now, Fitbit has plans to change that. 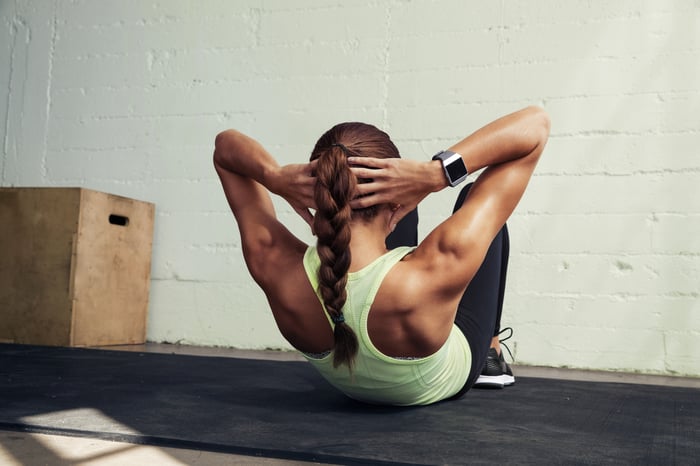 Fitbit has signed up over 1,400 third-party developers and is working to generate excitement within this community about building apps. The company has set up a developer Twitter feed, scheduled developer "Appy hour" meetups around the world, and is sponsoring a developer challenge with $15,000 in prizes awarded for the best apps. The three app categories in the contest are: sports and fitness, health and wellness, and transportation and local. The winning apps will be announced over the first three weeks in December, and ideally available for a holiday gift Ionic.

I asked Hudson how developers would get paid for their work, and he indicated that there is "not a direct monetization strategy with our apps, meaning the apps being distributed on our platform are free." This model works well for a basic free app where users can upgrade to a subscription to unlock premium features or an ad-supported app. Free-to-premium apps such as Strava and Fitbit's Coach are available now. An ad-supported news-aggregator app, Flipboard, has been announced, but with no specific availability date.

Apps for a healthier world

Fitbit has also been partnering with insurers, corporate wellness programs, and medical device companies to create capabilities to help drive better health outcomes for its users.

While not all of these capabilities are using the app development platform, having a robust development platform will make it easier to create more health-related apps. These examples are just a start toward what Park stated as the second goal in buying Pebble last year: to build tools for the healthcare industry.

But a lot has changed in the year since Pebble was purchased. In addition to releasing a smartwatch with an engaged developer community, the company has joined the FDA's digital health precertification program and touts itself as having "the most popular wearable" for health research worldwide. And the company is starting to focus on conditions including diabetes, heart health, sleep disorders, and mental health, seeing a big runway for growth.

The company's devices, data, and software combine to form a robust platform that helps it get one step closer to its vision of "making everyone in the world healthier." It will be exciting to watch what Fitbit does next.