In response to announcing a secondary common stock offering, shares of Aratana Therapeutics (NASDAQ:PETX), a commercial stage biotech focused on pet health, fell 14% as of 11:35 a.m. EST on Tuesday.

Aratana announced that it plans to sell $35 million of its common stock in an upcoming secondary offering. Management also said that the underwriters of the deal will be granted an option to purchase an additional $5.25 million. If everything works out then the company could raise slightly more than $40 million. At current prices, the deal could potentially dilute shareholders by about 15%.

This timing of this deal might have some investors scratching their heads. After all, shares have basically moved sideways from the beginning of the year, so it's not like the company's equity is particularly expensive. Aratana also just reported more than $70 million in cash on its books as of the end of September. On the surface that appears to be enough cash to keep the doors open for quite some time, especially when compared to last quarter's loss of just $8.9 million. What's more, Aratana now boasts three drugs on the market -- Nocita, Galliprant, and Entyce -- that should grow meaningfully in the years ahead. If true, then the company's net loss should shrink considerably from here, which would extend the cash runway even further.

Traders could be interpreting this surprise capital raise as news that management isn't expecting as much growth from its marketed drugs as originally thought. When combined with the expected dilution, it isn't surprising to see that shares are tumbling on Tueday. 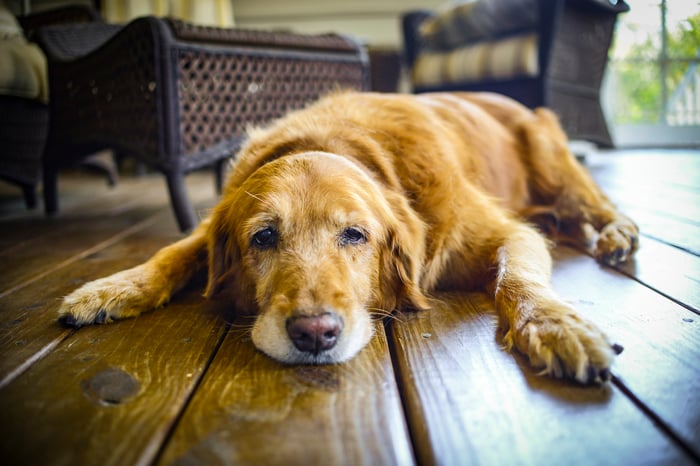 Despite Tuesday's downward move, Aratana's investors do have a few upcoming catalysts to look forward to. The company and its partner Elanco -- which is a division of Eli Lilly -- just received a positive opinion on Galliprant in the E.U. That gives the drug a great chance of receiving approval in the first half of 2018, which could spur sales growth. Development also continues for AT-014, which is a hopeful treatment for dogs diagnosed with osteosarcoma. The company expects to receive a conditional licensure from the U.S. Department of Agriculture before year end.

In total, bulls continue to have reason to believe that Aratana's future is still looking bright. While this stock is still too risky for my taste, a risk-loving investor might want to view Tuesday's drop as their chance to get in.