The biotech sector isn't for the faint of heart. While investors can strike it rich if they get lucky, they can also lose a bundle if things don't go according to plan. Given the risk, it can take a lot of courage to put money to work in the sector. 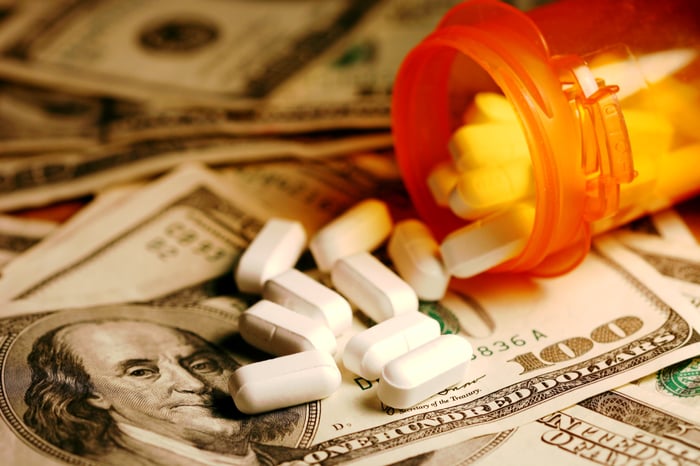 George Budwell (Edge Therapeutics): Enterprising investors on the hunt for sizable returns may want to check out the clinical-stage biotech Edge Therapeutics. Edge is developing a late-stage product dubbed "EG-1962," which is aimed at improving the delivery of nimodipine in patients with aneurysmal subarachnoid hemorrhage (aSAH) resulting from a ruptured brain aneurysm.

The short version of the story is that orally administered nimodipine in aSAH patients is known to induce a motley crew of serious side effects, and places a heavy burden on nurses to maintain a patient on an oral regimen over the span of several weeks. Edge is hoping to solve these problems with its proprietary, programmable, biodegradable polymer-based development platform known as Precisa.

In effect, this novel polymer-based delivery method allows for a far more targeted and sustained release of nimodipine, which should substantially reduce side effects, cost of care, and increase the drug's effectiveness. The point is that EG-1962 could eventually become the new standard of care for this deadly brain injury.

Looking ahead, Edge is expected to release top-line data from EG-1962's ongoing pivotal-stage trial in late 2018. The company is, perhaps, two years away from transforming into a commercial-stage operation.

While EG-1962 should be able to generate considerable revenue if approved, the downside is that Edge's value proposition relies heavily on this drug's clinical fate. The company, after all, lacks a well-diversified pipeline beyond EG-1962. Put simply, this high-risk, high-reward biotech stock is arguably only suited for ultra-aggressive investors willing to sacrifice safety for the chance to generate unusually high returns on capital.

Too much paw-tential to ignore

Sean Williams (Aratana Therapeutics): Investors with initiative who are looking to nab an intriguing growth stock in the biotech industry would be wise to take a peek at Aratana Therapeutics, which develops medicines for companion animals, such as cats and dogs.

The allure of a company like Aratana can be seen in pet ownership statistics. According to American Pet Products Association (APPA), the amount Americans have spent annually on their pets has quintupled from $17 billion in 1994 to an estimated $69.4 billion in 2017. Of this $69.4 billion, it's estimated that we'll spend $16.6 billion just on veterinary care and another $14.9 billion on over-the-counter medicines and supplies this year.

It's also worth noting that, despite two recessions over the past 20 years, pet sales have grown each and every year, per the APPA. With a 2012 Harris Interactive poll also showing that 91% of pet households consider their four-legged friend as part of the family, it only makes sense to assume they'll spend whatever is necessary to ensure the health and happiness of their pets.

That's where Aratana comes in. As a drug developer specifically focused on companion pets, it has access to the 68% of households that now own pets, and along with that, excellent pricing power. According to Wall Street's projections, sales for the company are expected to grow at a blistering pace, from $23 million in 2017 to $129 million by 2020. Recurring profitability is also expected to occur in late 2019 or early 2020.

Aratana currently has only a small number of approved drugs, perhaps the most notable being Galliprant, which is a first-in-class treatment for canine osteoarthritis. This drug landed Aratana a licensing partnership with Elanco, the animal-health division of Eli Lilly (NYSE:LLY), providing Aratana with $45 million in upfront cash and the potential to earn $83 million in future milestone revenue, in addition to net-sale royalties.

Aratana's pipeline consists of about a half-dozen ongoing studies in dogs and cats. These include feline herpes virus (AT-006), and management of weight loss in cats with chronic kidney disease (AT-002). Chronic kidney disease is a common cause of death for felines, so AT-002 could show promise in improving the quality of life.

Add the pet ownership statistics, pricing power, organic sales growth, and pipeline together, and we have what should be a very successful company with tons of paw-tential.

A business model in transition

Brian Feroldi (Alkermes): Alkermes isn't a typical biopharmaceutical company, but that's a good thing. Rather than focus on developing its own products, the company got its start by helping other pharmaceutical companies extend the life of their hit drugs. One of Alkermes' tricks was to reformulate the drugs for extended release. In exchange for its services, Alkermes got a cut of the reformulated drug's sales through royalty payments.

This is a solid business in its own right -- Alkermes generated $487 million in sales last year from manufacturing and royalty revenues -- but Alkermes has been dreaming bigger lately. The company launched two wholly owned drugs in recent years -- Vivitrol, a drug used to treat opioid and alcohol dependence, and Aristada, an extended-release version of the popular schizophrenia drug Abilify -- that have had a lot of success. Last quarter, sales of these drugs jumped by 40% and 120%, respectively, bringing in more than $88 million in total revenue. Those gains are more than offsetting some of the weakness that it's seeing from its legacy business.

Looking ahead, Alkermes is doubling down on its proprietary drug business. The company has four products in late-stage clinical trials that promise to meaningfully increase sales over the coming years. The most advanced compound is called ALKS 5461, which is a hopeful treatment for depression. The company plans on submitting a rolling application to the Food and Drug Administration (FDA) in the next few weeks.

Management believes that this drug holds blockbuster potential, so it could meaningfully impact the company's financial statements if it wins approval. Other potential blockbusters waiting in the wings include ALKS 3831, a hopeful treatment for schizophrenia, and ALKS 8700, a potential treatment for multiple sclerosis.

Between its royalty business, products already on the market, and its exciting late-stage pipeline, Alkermes offers biotech investors steadily improving financial statements and the potential for meaningful upside if a few of its pipeline products work out. That makes this a great stock for growth-focused biotech investors to get to know.