If you're invested anywhere in the automotive industry, you've no doubt heard and read the words "autonomous vehicles" about a million times already. Even if you sometimes mentally swap in such alternative descriptors as "driverless cars"  or "self-driving cars," you're probably feeling a bit of burnout on the subject.

But let's be clear. Autonomous vehicles are here to stay, and they're only going to get more important. And as the technology that powers them develops, it's becoming increasingly clear that Delphi Automotive (NYSE:DLPH) will be a brilliant long-term investment -- a thesis that was only made stronger by the company's most recent move.

Delphi announced Tuesday it was acquiring nuTonomy Inc. for a price of up to $450 million, depending on earn-outs. You probably aren't familiar with nuTonomy, but this is a big move for Delphi as it tries to build itself into a leading developer of autonomous vehicle technology. The privately held software firm, founded in 2013, will bring its 100-plus employees, including 70 engineers and scientists, to Delphi's autonomous driving team, basically doubling group's size overnight.

"The combination of the nuTonomy and Ottomatika AD teams, along with Delphi's industry-leading portfolio of perception systems and smart vehicle architecture solutions, further enhances our competitive position as the industry's most formidable provider of autonomous mobility solutions. This transaction is another example of our ongoing dedication to developing, implementing, and commercializing the highest performing and safest AD system available," said Delphi President and CEO Kevin Clark in a press release. 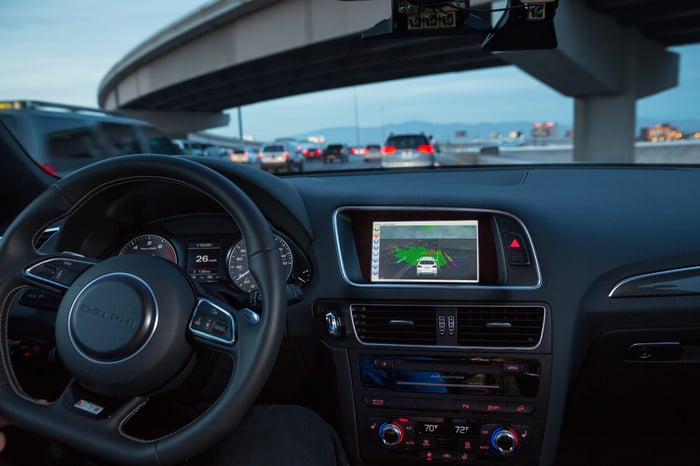 It's easy to overlook small acquisitions such as this, but when you zoom out and realize that with such moves, Delphi is slowly but surely bolstering its leadership position in autonomous driving technology, it becomes clear that investors should take them seriously.

Remember that it was just two years ago that Delphi acquired Carnegie Mellon University spinoff Ottomatika as well as Control-Tec, which provides telematics and analytics software. Early this year, it picked up over-the-air software update niche player Movimento. Further, as important as the acquisitions of technology are alone, the true win could derive from collecting (and hopefully retaining) rare talent in the rapidly expanding industry.

The company is already refocusing itself as plans proceed to spin off its Powertrain segment into a separately traded public company that will keep the Delphi name; the remaining (and more lucrative) electric vehicle and self-driving solutions business will be called Aptiv. Acquisitions such as nuTonomy will help drive this business that started as a division of General Motors (NYSE:GM) into a future of more lucrative margins and above-market-average growth, in a driverless industry that has tantalizing addressable market potential that few can fully grasp today.

While many different companies are fighting to scoop up talent as Delphi did with its acquisition, Delphi is one step closer to becoming the pure driverless technology play investors are looking for. There will be obstacles and challenges, and management will have to find more hits than misses among its acquisitions, but for long-term investors, each of these purchases makes Delphi an increasingly brilliant investment.