Please ensure Javascript is enabled for purposes of website accessibility
Log In Help Join The Motley Fool
Free Article Join Over 1 Million Premium Members And Get More In-Depth Stock Guidance and Research
By John Rosevear - Mar 31, 2020 at 11:47AM

Delphi may have just blown the deal.

Shares of auto-parts supplier Delphi Technologies (DLPH) were down sharply on Tuesday after the company drew down its line of credit without permission from acquirer BorgWarner (BWA 2.49%) -- leading BorgWarner to warn that it may back away from the $3.3 billion deal. As of 11 a.m. EDT, Delphi Technologies' shares were down about 19% from Monday's closing price.

Back in January, Delphi agreed to be acquired by BorgWarner in a $3.3 billion deal that valued Delphi's equity at $1.5 billion. (The remainder is Delphi's debt, which BorgWarner agreed to assume.) Delphi's shares soared after the news was announced. 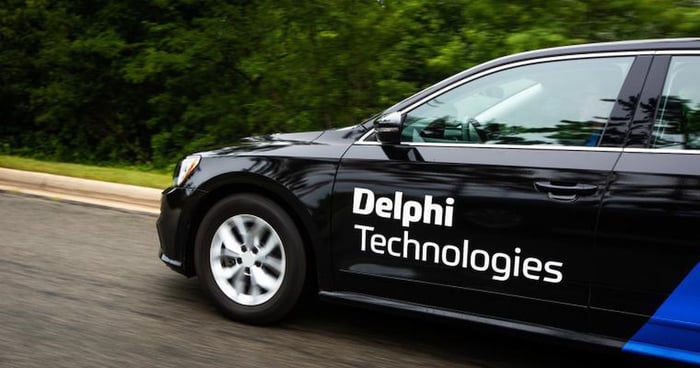 Delphi's deal to be acquired by BorgWarner might be in peril after the company drew down a $500 million credit line. Image source: Delphi Technologies.

That deal was (and for the moment, still is) expected to close in the second half of 2020. But now there's a problem: Delphi drew down $500 million from its line of credit (and thus increased its debt) on Monday, without asking BorgWarner first.

That led BorgWarner to send a letter declaring that Delphi was in breach of the acquisition agreement. With the deal now in question, investors are walking away from Delphi's shares.

It's no mystery why Delphi drew down its line of credit: Like most auto companies, it's trying to hoard cash. The coronavirus pandemic has halted auto manufacturing in North America, Europe, and many other parts of the world. That, in turn, has sharply reduced revenue and increased cash burn for companies like Delphi.

But Delphi made a big mistake by not checking with BorgWarner first.

Both Delphi and BorgWarner said in separate statements that they continue to believe that the acquisition has long-term strategic value, and both say they're still working to close the transaction on schedule. But it's possible that Delphi's mistake just gave BorgWarner an opening to renegotiate the price. Investors in both companies should watch this closely.