The company is planning a major spinoff -- and it'll rename its remaining high-tech business at the same time.

Giant auto-industry supplier Delphi Automotive (DLPH), a leader in the emerging self-driving technology space, said on Wednesday that it will soon have a new name. More accurately, it will have two new names, because it's about to become two companies. Here's the story.

What's going on: Delphi's spinoff will be called... Delphi

Here's the background: Back in May, Delphi announced that it plans to spin off its powertrain division, which supplies parts and technologies for internal-combustion engines, to refocus its core business on future technologies like electric vehicles and self-driving systems. On Wednesday, it said that the spinoff -- the internal-combustion powertrain business -- will be called Delphi Technologies, and the remainder of the company-soon-to-be-formerly known-as-Delphi-Automotive will have a brand-new name: Aptiv. 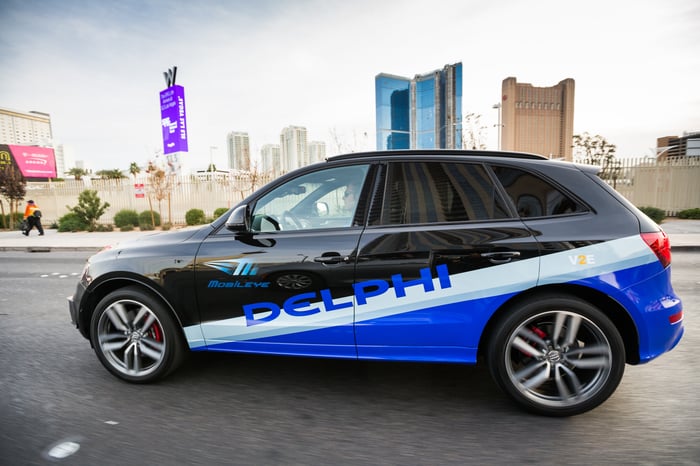 The idea is that, since the spinoff will have the business that was historically Delphi's core, it should retain the Delphi name. The business that looks to the future will have a new, futuristic-sounding name.

Current Delphi CEO Kevin Clark will be the CEO of Aptiv, while Liam Butterworth, who currently leads Delphi's powertrain unit, will become CEO of the spun-off Delphi Technologies. Both will be publicly traded companies under the ticker symbols APTV and DLPH, respectively. Current Delphi shareholders will receive shares of Delphi Technologies, while their existing shares will become shares of Aptiv.

Delphi's shareholders will be asked to approve the new corporate names in November. If all goes according to plan, Delphi expects the spinoff to be completed by the end of the first quarter of 2018.

Why it's happening: Valuation

Why is Delphi separating into two businesses? The answer becomes clear when we consider two things:

Simply put, the old powertrain business seems to be holding back Delphi's valuation. By separating Delphi into two parts -- one focused on its profitable-but-slow-growing legacy business and the other focused on technologies that have huge potential for growth -- the idea is that the two companies will collectively have a higher valuation than the current Delphi company.

Delphi isn't the only auto-industry supplier straddling the old and new worlds, by the way. Swedish auto supplier Autoliv (ALV -2.26%) said earlier this month that it's considering a similar separation. Autoliv's focus is on safety systems: Its "legacy" business involves airbags and seat belts, while the future business is similar to Delphi's (er, Aptiv's), centered on advanced driver-assist systems and self-driving efforts.

What's next for Delphi

Investors seem to like the idea of a split. At least as of right now, it doesn't seem likely that Delphi's shareholders will throw a wrench into the plan. I expect the new names to be approved, and the split to be completed on schedule by the end of next March.

Delphi said that the future Aptiv and Delphi Technologies will both unveil their new brands at the Consumer Electronics Show in Las Vegas in January. We'll probably learn a lot more then about the post-split plans for both.