The first autonomous cars will likely emerge from big-company partnerships. Here are three companies at the center of some of the most promising deals.

How should we approach investing in autonomous vehicles -- so-called "self-driving cars" -- here in 2017?

Of course, no company is (yet!) producing a fully autonomous vehicle. In fact, one thing that's becoming clear as companies race to develop autonomous-vehicle technology is that no one company is likely to do it entirely on its own. Tech companies, automakers, and auto-industry suppliers are teaming up to share expertise, hoping to bring the best possible technology to market -- as soon as possible.

How can that help investors? If we can identify the companies that have fingers in the most promising pies, we might be able to get an early read on which companies are most likely to profit handsomely, as vehicles that can drive themselves become commonplace.

I've been watching this space closely as it has emerged over the last few years. Right now, I think these three companies each have an excellent chance to profit handsomely from the rise of autonomous vehicles: NVIDIA (NVDA 0.47%), Intel (INTC -3.04%), and Delphi Automotive (DLPH). 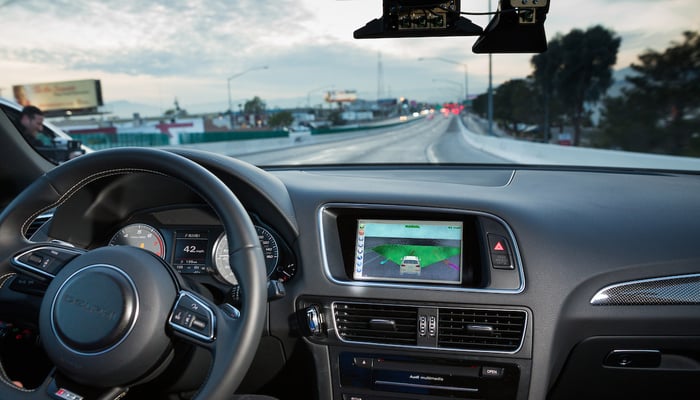 Who's driving this Audi SUV? A prototype autonomous-vehicle system developed by two of the companies on our list drove it in a demonstration in Las Vegas earlier this year. Image source: Delphi Automotive.

NVIDIA is an emerging automotive powerhouse

It's only recently that NVIDIA has ramped up its efforts to push into the automotive space. Its automotive business is still small, accounting for just 7.2% ($140 million) of the $1.9 billion in revenue that it generated in the quarter ended April 30.

But as the company sees it, the potential is enormous. Between chips and systems for digital "cockpit" displays, supercomputing processors for autonomous vehicles, and systems for "transport as a service" (ride-hailing and car-sharing), NVIDIA believes its potential market is between $6 billion and $10 billion.

How will it access those markets? Its partnerships are a clue: Back in February, NVIDIA and giant auto supplier Robert Bosch GmbH announced that they will collaborate on a hardware "brain" for autonomous vehicles. Bosch is a key supplier to many automakers, and has deep relationships with (among others) giant Volkswagen AG, VW subsidiary Audi AG, and Daimler AG -- all of which are investing heavily in autonomous-vehicle technology. The alliance gives NVIDIA a much broader path to market in the automotive space.

It also gives NVIDIA a deeper relationship with companies that could be dominant in the early days of self-driving. Between its Mercedes-Benz luxury vehicles and its huge heavy-truck business, Daimler, in particular, has the potential to be a powerhouse in this space. That's just one of what could be a long list of very profitable relationships for NVIDIA as autonomous vehicles become commonplace.

Self-driving could be the key to Intel's future

I know that a lot of investors are wary of Intel. Growth in the chip giant's core business is stalling, and its management team has arguably been flailing a bit, jumping from one idea to another in search of future growth. But I think it's very possible that Intel's search for a path to future growth ended in March, when it struck a huge ($15.3 billion) deal to buy an Israeli tech company, Mobileye (MBLY).

Mobileye is a fairly small company, but when it comes to autonomous-vehicle technology, it's a very big deal. The various autonomous-vehicle systems under development use several different combinations of sensors, but nearly all of them use "passive visual" sensors -- cameras and systems that can intelligently process the images they capture.

That's the space Mobileye dominates. It's already a key supplier of the chips and technology used in existing advanced driver-assist systems offered by nearly all of the world's automakers, and it's deeply respected by engineers and executives throughout the auto business. Mobileye's client list includes almost all of the automakers you've ever heard of, as well as a bunch of smaller ones that might emerge as heavyweights in the future.

Intel doesn't plan to fold Mobileye into its existing business. Instead, it'll leave the Israeli company largely intact -- while essentially adding its own chips and systems to Mobileye's catalog. When the deal closes (expected by the end of the year), Intel will instantly have deep access to the world's automakers -- just as demand for processing power in vehicles is about to skyrocket.

Intel already has its fingers in a few important pies with Mobileye. The two companies are working with Delphi on a "turnkey" autonomous-vehicle system that they'll make available to automakers by the end of 2019. In a separate (but related) effort, the three are working with German luxury-vehicle giant BMW AG on a series of autonomous-vehicle systems -- which the partners also intend to offer to other automakers, as well.

CEO Brian Krzanich thinks the total addressable market for autonomous-vehicle systems and the data centers that will support them will be over $100 billion a year by 2030. Intel is now in a position to grab a very big piece of that, which could have a major impact on a company that generated just under $60 billion in revenue in 2016.

Yes, Intel has issues. But its stock isn't expensive at about 12 times its expected 2017 earnings, and its 3% dividend yield provides some comfort. While the Mobileye deal looks very expensive now, the potential upside could make it -- and Intel's stock -- look very cheap in time.

Delphi Automotive is to the Intel-Mobileye partnership what Bosch is to NVIDIA, more or less: It's the well-established auto-industry supplier that has deep relationships with most of the world's automakers -- and the expertise to integrate its partners' systems into its clients' vehicles.

Like Bosch, Delphi has its fingers in multiple pies. It's a partner to Intel and Mobileye in both of the efforts I noted above, both of which have the potential to be very profitable. But there are two big things that distinguish Delphi from Bosch for our purposes.

First, Delphi is a public company, and Bosch isn't. Second, and more importantly, Delphi is setting itself up to become a "pure play" in autonomous-vehicle technology and related fields. The company announced earlier this year that it will spin off its legacy internal-combustion engine components business to focus entirely on "electronic safety systems" -- autonomous-vehicle tech and its building blocks.

That move will make Delphi the closest thing to a "pure-play" investment in autonomous-vehicle technology since -- well, since Mobileye. But Delphi's current valuation (around 20 times earnings) makes it much cheaper than Mobileye was before Intel scooped it up.

It might seem counterintuitive to invest in an auto-industry stalwart just as the industry is about to be transformed, but that's arguably another reason why Delphi deserves a very close look.

Got $5,000? 2 Microchip Stocks You Need in Your Portfolio

Why Are Nvidia, Micron, and AMD Stocks Falling?
413%