Daimler and Bosch say they will collaborate on self-driving vehicles, possibly for Uber.

The partners plan to have a system available for self-driving taxis in urban areas by "the beginning of the next decade."

Bosch and Daimler said that the primary objective of their new partnership is to create a self-driving system for automated vehicles working in urban areas, whether with car-sharing or ride-hailing services.

Specifically, it appears that the two will focus their joint efforts on creating the software "brain" for that self-driving system. Here's the key bit from the companies' joint press release (emphasis added):

The two companies have now agreed to set up a development alliance that aims to make a system for fully automated (SAE-Level 4) and driverless (SAE-Level 5) vehicles a reality on city streets by the start of the next decade. The objective is the joint development of software and algorithms for an autonomous driving system.

(Level 4 vehicles are fully self-driving with no human intervention needed under certain circumstances -- generally, they're limited to carefully mapped areas. Level 5 vehicles can operate anywhere a human driver could operate. Most experts think that viable Level 5 technology is still many years away.) 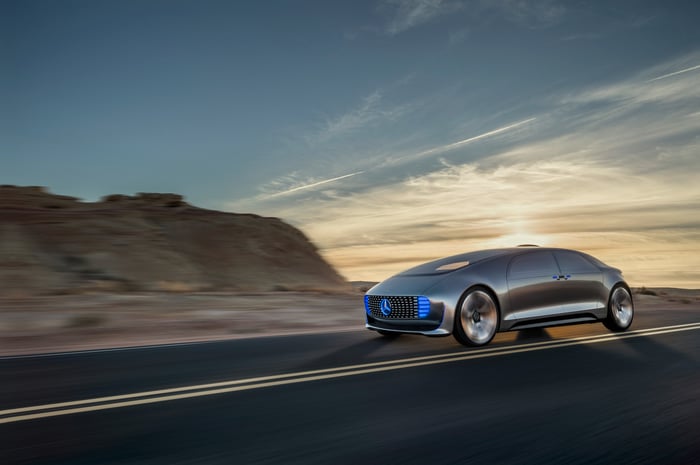 This Mercedes-Benz concept vehicle is meant to show what a fully self-driving car might be like. Will it be the taxi of the not-too-distant future? Image source: Daimler AG.

Daimler has a customer waiting: Uber

Back in January, Daimler and ride-hailing giant Uber Technologies announced a deal to cooperate on the creation of self-driving vehicles for use in Uber's service. That might have been the impetus for the deal with Bosch. It's possible that Daimler looked at Uber's desired timeline, looked at the state of its own self-driving effort -- and decided to team up with Bosch, long a key Daimler supplier, to get things moving more quickly.

What's interesting is that Uber has its own autonomous-vehicle research program, built around experts recruited from Carnegie Mellon University's robotics program. Uber itself has plenty of self-driving software expertise, at least in theory.

Bosch may well bring something else to the table. Bosch and NVIDIA (NVDA 3.41%) announced in February that they will collaborate on bringing a hardware "brain" for autonomous vehicles to market. Daimler is already working with NVIDIA on some aspects of its self-driving efforts.

It's also possible that Daimler has decided to work independently of Uber so that it can use the resulting system in its own luxury vehicles and trucks.

The trucks are a significant part of Daimler's self-driving plans. Whatever you think of the opportunity for self-driving cars, it's pretty clear that self-driving commercial trucks will be a huge market opportunity once the technology is perfected -- and Daimler has been clear that it plans to be a leader in that space.

The self-driving competition is shaping up

The Daimler-Bosch alliance is the latest is a growing list of tie-ups between auto-industry and technology companies working on autonomous-vehicle technology:

Alliances are still shifting and many of the details of these (and other) deals are not yet public. But slowly, the battleground for the autonomous-vehicle market is beginning to take shape.

And now we have a slightly better idea of how Daimler -- and Bosch -- plan to become significant players in the self-driving wars.