NVIDIA is aggressively looking to cut its teeth in these three areas to power its long-term growth.

NVIDIA (NVDA -2.75%) has come a long way since it was founded almost a quarter of a century ago. From being a supplier of graphics processing units (GPUs) and 3D processors for PCs, the chipmaker is now known for making big bets on the future.

Though gaming is still its biggest business, accounting for over 60% of revenue, NVIDIA grabs headlines for aggressively pursuing opportunities in three potentially fertile markets: automotive, professional visualization (which includes virtual reality and augmented reality), and data centers. In fact, the company's revenue from these segments has shot up remarkably in the past few quarters. 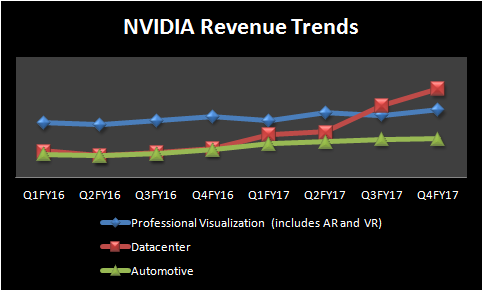 The good news for NVIDIA investors is that these markets are still in the early phases of growth, and could give it a massive top-line boost in the long run. Nvidia reported $6.9 billion in total revenue in its recently completed fiscal year.

NVIDIA's automotive business is still small as it contributes less than 10% to the company's top line, but the opportunities in the segment are tremendous. The chipmaker believes that its serviceable addressable market (SAM) in automotive could be between $6 billion and $10 billion.

In fact, the automotive opportunity is currently bigger than the total revenue the company generated last year, so it is moving aggressively to cut its teeth in the area. NVIDIA's latest undertaking in this market involves partnering with Bosch in a bid to manufacture self-driving car systems on a mass scale.

Bosch is known for supplying components to automakers, and it will now use NVIDIA's next-generation supercomputing platform for self-driving cars -- Xavier -- to develop a supercomputer. This is a big deal for NVIDIA as Bosch is the largest automotive component supplier globally in terms of revenue.

The Bosch partnership is one of several feathers in the cap for NVIDIA: It is already rolling with the likes of Tesla, Audi, BMW, and others to develop its self-driving technology. In fact, Tesla is using NVIDIA's DRIVE PX2 artificial intelligence platform across all of its current models, and will deploy the technology in the upcoming Model 3.

What's more, NVIDIA plans to power a fully autonomous car by next year. To that end, it is working on the technology to enable Level 4 autonomy to eliminate the need for human intervention while driving. This makes it clear that the chipmaker is moving at a rapid pace to benefit from the future of automotive technology.

Virtual reality will be a big play

Virtual reality is fast gaining momentum thanks to its potential application in areas such as healthcare, gaming, and the military. Currently, the majority of the content creation is being done on PCs, with market research company TechNavio estimating that 43% of the $221 million worth of VR content was created on this platform in 2015.

TechNavio also forecasts that VR content creation will grow at 128% a year until 2020, indicating that the market will be as big as $13 billion. If 40% of the content is created on PCs at that time, then the device segment will generate over $5 billion in VR content.

NVIDIA's latest GP100 and P4000 Quadro graphics processing units are marketed as "VR Ready" given their strong specs and the ability to create immersive content. In fact, the company is giving its users the flexibility to combine two of its Quadro graphics cards to generate stronger computing power.

As it turns out, NVIDIA's VR-focused product development is already bearing fruit by pushing up the company's professional visualization revenue by 11% in the last fiscal year. The segment now accounts for more than 10% of its overall business, but it can take off big time as VR technology gains traction.

The data center business is booming

NVIDIA's data center business is one of its fastest-growing segments, recording a 205% year-over-year jump in revenue last quarter. In fact, this segment is now bigger than both automotive and professional visualization, and is capable of sustaining its terrific growth thanks to the growing complexity and volume of data.

For instance, the Internet of Things (IoT) is expected to generate a huge amount of data in the coming years, thanks to a massive spurt in the number of connected devices. Machina Research pins the number of connected IoT devices at 27 billion in 2025, up from 6 billion a couple of years ago, but such huge growth in connections will create a challenge for data centers.

Gartner believes that a fourth  of IoT data will be abandoned as data centers are overloaded.NVIDIA is looking to solve this problem with its Tesla line of GPUs, which help data centers improve computing speeds and reduce deployment costs.

NVIDIA executive Shanker Trivedi points out that the Tesla GPUs can help data centers lower costs by 60% while boosting computing power by five times. The efficacy of these GPUs has helped the chipmaker land flagship cloud computing clients in the form of Amazon Web Services and Microsoft Azure, which are using NVIDIA GPUs to upgrade their data centers.

NVIDIA seems to be pulling the right strings to make a dent in these three fast-growing areas through its product development moves. Therefore, the company should get a nice revenue boost in the long run.