Please ensure Javascript is enabled for purposes of website accessibility
Log In Help Join The Motley Fool
Free Article Join Over 1 Million Premium Members And Get More In-Depth Stock Guidance and Research
By John Rosevear - May 16, 2017 at 6:05PM

The tech-savvy supplier will help BMW and its other partners integrate a self-driving system -- and offer it to other automakers.

Delphi will help integrate the system into BMW's vehicles -- as well as offer it for sale to other automakers. 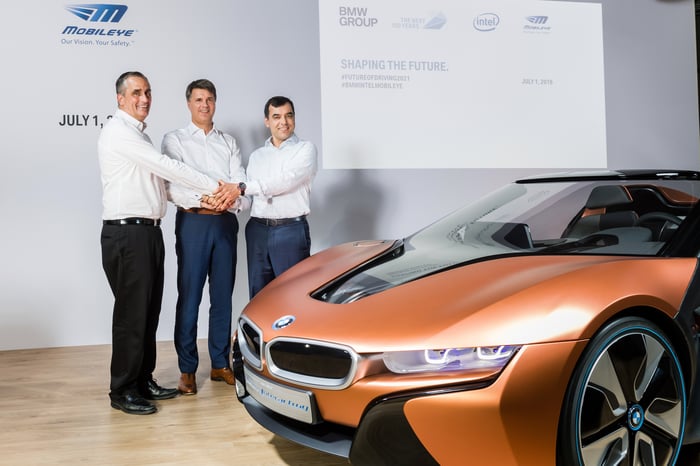 Delphi is joining an effort that has been ongoing for about a year now. Last July, BMW, Mobileye, and Intel announced that they had joined forces to help BMW bring a fully autonomous vehicle platform to market by 2021.

BMW said in a statement on Tuesday that, together with Mobileye and Intel, it has developed a "scalable [self-driving] architecture that can be adopted by other automotive developers and carmakers to pursue State-of-the-Art designs and create differentiated brands." Delphi's role, BMW said, will be to help bring a series of self-driving systems to market -- and to offer them to other automakers:

System integrators, such as Delphi, are critical for the go to market strategy of the joint solution to reach multiple automotive OEMs quickly. A key role for Delphi will be the integration of the solution delivered by BMW Group, Intel and Mobileye into OEM vehicle architectures. Additionally, Delphi may also provide required hardware components such as sensors as well as specific customization efforts and applications for differentiation.

["OEM" is auto-industry slang for companies that build finished vehicles -- "Original Equipment Manufacturers" -- as opposed to suppliers like Delphi.]

BMW said that the systems that will be brought to market by the partners range from "Level 3" to full "Level 5" systems. (You can learn more about the levels of self-driving technology here.)

Delphi is a natural fit for this effort. It's already working with Mobileye and Intel in a separate effort, announced in August of last year, to offer a "turnkey" Level 4 self-driving system to automakers by the end of 2019. In a post on Delphi's corporate blog, CTO Glen De Vos said that effort will continue:

This agreement [with BMW] won't slow down our previously announced automated driving solution called the Centralized Sensing, Localization and Planning Platform (CSLP), which Delphi, Mobileye and Intel are developing -- a turnkey AD solution based on the Ottomatika software, our computing platform, and our sensors. In fact, one of the most exciting aspects of today's announcement is the potential to align our work on the CSLP Platform with the work BMW, Intel, and Mobileye are doing as part of their cooperation.

What it means for Delphi investors

Earlier this month, Delphi announced that it will spin off its legacy powertrain systems business into a separate company, while it refocuses its core business on higher-profit electrical and electronic segments. Put another way, Delphi is aiming to reposition itself as a pure play focused on driverless vehicle technology.

While it's no surprise that Intel and Mobileye would want to work with their existing partner, this deal with BMW and the others helps bolster Delphi's position as an emerging leader in the integration of self-driving systems.

While that might not do wonders for Delphi's stock price in the near term, it will provide another proof point of Delphi's market position in this important emerging space over time.