It's a rare day when you see investors get excited about a stock from the mundane world of trucking -- but that day finally arrived on Tuesday, when truckmaker Navistar International (NYSE:NAV) finally reported its fiscal Q4 and full-year earnings.

That was the day when Navistar earned a profit. 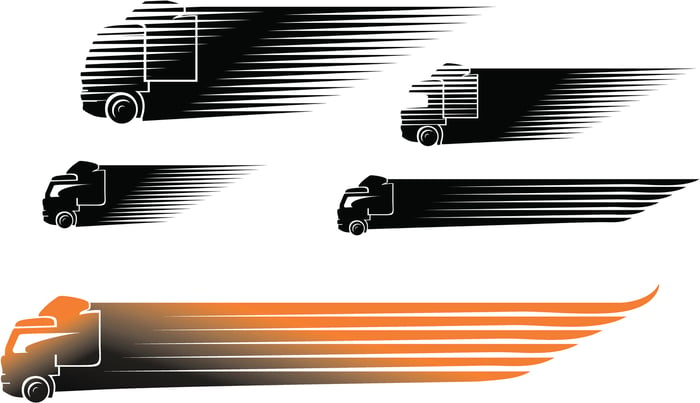 Navistar stock zoomed this week -- but is it heading for a cliff? Image source: Getty Images.

That statement shouldn't be surprising. It should be merely matter-of-fact. After all, for-profit enterprises are supposed to earn profits, with the attractiveness of the stock differing only with the degree of its company's profitability. Sadly for Navistar, this has not often been the case.

Data from S&P Global Market Intelligence tells the tale: For five years straight, from 2011 through 2016, Navistar failed to book a single full-year profit. Up until Q3 of this year, Navistar had been operating at a loss. But then, in Q4, a miracle happened:

Not only was this twice the $0.65 per share that Wall Street had predicted Navistar would earn, this fourth-quarter profit was enough to more than offset the $1.04 per share in losses racked up earlier in the year, leaving Navistar with a $0.32-per-share profit by year-end -- Navistar's first annual profit after five years of losses. This was despite revenue coming in at only $8.6 billion, Navistar's second-lowest revenue haul of the past six years. Navistar credited a 31% rise in unit sales of Class 6, 7, and 8 trucks for helping to boost that business, along with reduced losses on sales of used trucks.

Can Navistar keep this good news going? That remains to be seen, but it does seem to be what management is promising. Commenting on the results, Navistar CEO Troy Clarke called 2017 "a breakthrough year," in which the company "returned to profitability and grew our market share 1.5 points" and showed strong momentum heading into fiscal 2018.

Looking ahead, the industry predicted that it will deliver between 345,000 and 375,000 units of Class 6-8 trucks and buses in the United States and Canada this new fiscal year, and Navistar will grow its share of those sales approximately 7.5% to between $9 billion and $9.5 billion. It expects to be helped by sales through a new strategic alliance with Volkswagen Truck & Bus and also its new lines of HV Series and HX Series work trucks ("vocational trucks").

Management declined to give GAAP guidance for its earnings this coming year, but predicted that adjusted EBITDA will grow more than 20% year over year to between $675 million and $725 million. Assuming GAAP profits rise a similar 20%, that could mean a net income of perhaps $0.38 per share or more. Maybe a lot more.

Although not uniformly bullish on Navistar, analysts on Wall Street are hoping to see the company earn as much as $2.08 per diluted share this new fiscal year. So what does this mean for investors?

If analysts are right, then at a share price of $44.62, $2.08 in profits next year would grant Navistar a forward P/E ratio of 21.5, which doesn't seem like an excessive valuation on a stock growing adjusted EBITDA profits at 20% or so. On the other hand, if Navistar earns only $0.38 per share next year, then the stock's valuation will be closer to 117 times earnings -- which would be excessive.

Whether or not you think Navistar stock is a buy today probably depends a lot on whose estimates you believe.