Garmin (NYSE:GRMN) and GoPro (NASDAQ:GPRO) might seem similar on the surface. But a quick look behind the curtain shows one company losing relevancy while the other is embracing future technology.

"GoPro looks like it's about to roll over and die while Garmin is all about the new stuff," Tigress Financial CIO Ivan Feinseth told The Motley Fool. Feinseth covers Garmin and GoPro for his firm.

Last summer, he was the only analyst with a buy rating on Garmin when it was trading around $51. Now the stock has climbed to about $61, and he is one of two analysts who recommend buying it, according to the Bloomberg Terminal.

Feinseth says that's because people still don't understand Garmin, reducing it to just a dashboard-GPS company, similar to how they see GoPro as a one-trick pony with its action cameras -- except that GoPro actually is a one-trick pony. 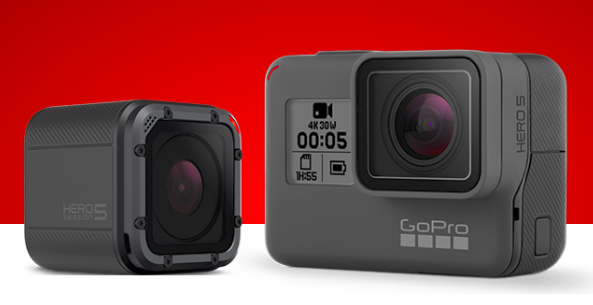 GoPro is a one-trick pony with its small lineup of action cameras. Image source: GoPro.

Garmin is all about new technology

Garmin has not only diversified its business with outdoor, fitness, marine, aviation, and auto devices, but it's also managed to stay at the forefront of technology in all its different segments.

For example, last fall the company released Garmin Speak to give drivers a navigation system that hooks up with Amazon's (NASDAQ:AMZN) Alexa voice assistant.

By January, the company already had an updated version known as Speak Plus that will be ready to ship out for $230 in February. The new device includes a built-in dashcam to record potential accidents, and to alert drivers of hazards (such as when they start drifting into another lane).

Even more impressively, Garmin introduced its scalable infotainment platform for automotive OEMs (original equipment manufacturers) at the 2018 Consumer Electronics Show. In addition to connecting with Alexa, this system allows rear-seat passengers to access the driver's route, search points of interest using popular app Foursquare, and send destinations to the main GPS system for the driver to follow. In addition, rear-seat passengers can use the system to stream content on their phones. You can see the infotainment platform in action in this video:

On the other hand, GoPro's first attempt to sell items beyond its action cameras ended up failing. The company had released a $799 Karma drone in 2016. After complaints came in that the drone would lose power mid-flight, the company quickly recalled the devices in November of 2016. In January of 2017, GoPro said that it was exiting the drone business altogether, due to a challenging competitive environment that made it hard to achieve attractive margins.

Now GoPro's main products are down to four action cameras: Hero5 Session, Hero5 Black, Hero6 Black, and Fusion. According to Feinseth, GoPro has simply lost its place in the market. "GoPro was a one-product company and people stopped strapping on and jumping off cliffs a long time ago," Feinseth said.

Not only is Garmin crushing multiple segments today, it's also setting itself up to play a big role in the future of self-driving cars.

The company has all the right products -- from its GPS devices to its cameras to its autopilot features -- to contribute to the growing trend, Feinseth said.

While Garmin will probably never transition into a car manufacturer, it can sell autonomous-vehicle software to one of the many carmakers that it's already established partnerships with, including Suzuki and Mercedes-Benz (part of German giant Daimler AG). Garmin has provided both with navigation and infotainment software.

This is similar to what Apple (NASDAQ:AAPL) is doing with Project Titan, a self-driving-car project aimed at selling software to carmakers. It's a way to take a bite out of the expected autonomous-car boom over the next five to ten years without having to become a car manufacturer overnight.

Last summer, in an interview with Bloomberg, Tim Cook referred to the project as "the mother of all AI projects." The phrase seems appropriate, given the expected growth projections for self-driving vehicles; research company Strategy Analytics projects the market will reach $800 billion by 2035, and skyrocket to $7 trillion by 2050.

Get on the right side of history

GoPro had a nice run. But the stock price peaked back in October 2014 at $93.85 per share, and it hasn't come close to returning to those highs since: 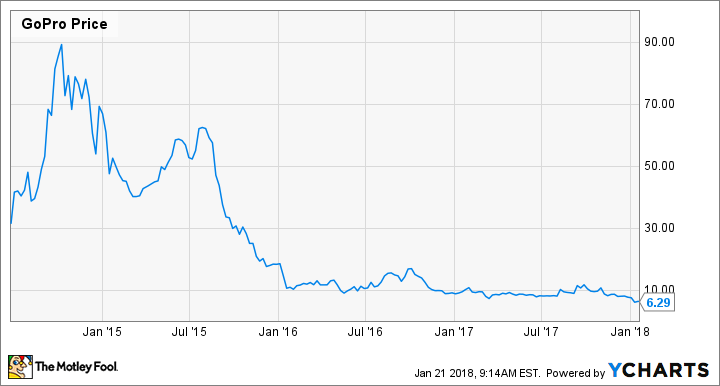 You want to be invested in the company that has diversified its products, and is poised to be an essential part of future technology that will be mass-adopted, like autonomous vehicles.

As Feinseth said: "Garmin has the most innovative and clever products. Period."