Big changes are coming down the pike for trucking, traffic safety, commuting, and the culture of car ownership, Intel asserts.

Intel (INTC -2.86%) released a report last month in collaboration with research firm Strategy Analytics that made some big predictions for the coming driverless car market. Among them was the estimate that self-driving cars would be at the heart of a $7 trillion market by 2050.

The company calls this new market the "Passenger Economy" and said that about 43% of it will be created from businesses using self-driving services, and the rest by consumers. Intel's focus on driverless cars has spiked ever since it purchased Mobileye N.V. (MBLY) earlier this year for about $15 billion. Mobileye makes computer vision technology and Intel is using the acquisition to propel itself toward the front of the driverless car pack.

But Intel's estimate of a $7 trillion passenger economy is just one prediction the company's making about the future of autonomous vehicles. Here are a few more. 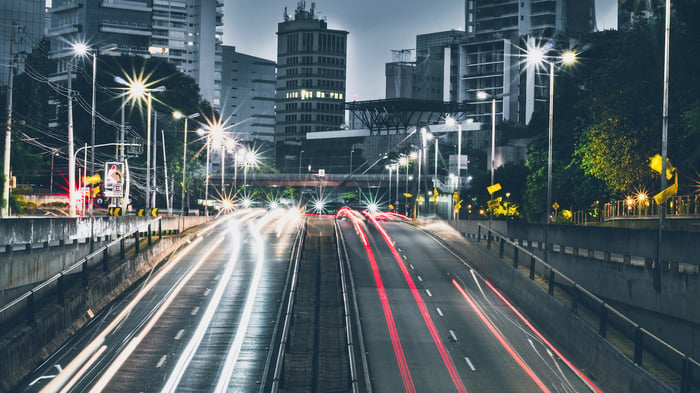 1. Automakers will adapt to a mobility-as-a-service model as car ownership is disrupted

The report says that in the coming decade's consumers will mainly be riding around in vehicles that they don't own and that this will completely disrupt car ownership as we know it. The company notes that most cars sit idle about 92% of the time, and asserts that a growing share of consumers will prefer to "order mobility" rather than owning vehicles outright.

Intel believes that automakers will still be able to benefit in this new economy: "Carmakers will be in the throes of replacing vehicle sales with Mobility-as-a-Service models," the report said.

That prediction may be closer to becoming reality than many realize. Ford (F 1.71%) has already said that it will have a fleet of self-driving cars capable of Level 4 automation (able to drive pre-set, mapped areas and on some highways) by 2021 and that these vehicles will be specifically for commercial use. Ford also says that by the end of this year, it will have about 90 self-driving cars on the road.

2. Trucking will see huge changes, including a loss of jobs

"The emergence of pilotless vehicle options will first appear in developed markets and will reinvent the package delivery and long-haul transportation sectors. This will relieve driver shortages around the world and account for two-thirds of initial projected revenues," the Intel report says of the B2B transportation-as-a-service market.

Unfortunately for the drivers who currently hold these types of jobs and those who would have succeeded them, the report notes that they are "likely to be displaced in significant numbers." As the American Trucking Associations recently noted in an open letter to the president, 7.3 million people work in trucking and trucking-related industries in the U.S. -- 1 in 16 people in the country.

3. New businesses will emerge as a result of driverless cars

Intel is optimistic that self-driving technologies will spur new innovations and new business as the vehicles become more widespread.

One such example is Alphabet's (GOOG -0.27%) (GOOGL -0.21%) smart city subsidiary, Sidewalk Labs. The company is applying machine vision technology to street signs and parking to create better solutions for real-time parking. Intel believes coupling technology like this to autonomous vehicles will "lead to a dramatic decline in surface parking, which would, in turn, free up land for higher-density redevelopment in urban cores around the world."

Intel thinks about $200 billion in revenue will be created from consumers using such new innovations and services. One example the company gave was the idea of "experience pods" that not only cart passengers to their destination but also offer services like a beauty salon, mobile healthcare clinic, or fast-casual dining.

4. More than half a million lives will be saved over the span of a decade

It's a well-known conclusion that driverless cars will eventually save many lives, but Intel offered up its own estimates about just how many in the report: "Conservatively, 585,000 lives can be saved due to self-driving vehicles in the era of the Passenger Economy from 2035 to 2045."

And not only with the roads be safer with driverless cars, but they'll also help drive down public safety costs because there will be fewer collisions. Those costs could fall by a total of more than $234 billion over that period, according to the report.

Driverless cars won't just make driving safer though, it'll likely cut down our commute times as well. Self-driving vehicles are expected to save people more than 250 million hours of commuting time a year in the world's 50 most congested cities, the report said.

The benefits will come from driverless cars' ability to access the most current traffic data and change their routes based on congestion, accidents, and construction. The vehicles will constantly be searching for the fastest routes and making changes in real-time to reduce trip times.

How Intel plans to benefit from all of this

Intel is looking to its purchase of Mobileye to spur new growth for the company. Mobileye's computer vision technology -- which essentially allows driverless cars to see -- has leapfrogged Intel to the head of the advanced driver assistance systems (ADAS) pack. The company knows that ADAS systems like automatic braking, adaptive cruise control, and lane change warnings are the stepping stones to fully driverless vehicles, which makes Mobileye a solid bet.

The thing investors need to remember is that Intel's purchase of Mobileye wasn't a bet on the company's revenue streams. The driverless car tech company brought in just $358 million in revenue in 2016, a figure that's dwarfed by the $59 billion Intel earned.

Instead, Intel will take Mobileye's technology and likely use it to sell driverless car systems to other companies, pairing it with the company's processors. The company's been pursuing new avenues of chip growth as PC sales continue to decline and the company is betting that selling chips into the $7 trillion passenger economy may be the right play.

Intel CEO Brian Krzanich told Bloomberg in March that, "If you look at where autonomous vehicles are going, you have to make a deal in order to be there in 2021 when models hit the road."

In 2016, Intel earned 55% of its revenue from its client computing group (CCG), which includes all of its chips for notebooks, tablets, desktops. Meanwhile, the company's Internet of Things group (IOTG) -- which includes chips for the transportation market -- accounted for just 5% of revenue. So even though Intel is making a serious play on a potentially massive market, it will still be a long time before its Mobileye purchase and driverless car tech plans have a major impact on the company's top line.