Please ensure Javascript is enabled for purposes of website accessibility
Log In Help Join The Motley Fool
Free Article Join Over 1 Million Premium Members And Get More In-Depth Stock Guidance and Research
By Eric Volkman - Feb 23, 2018 at 7:48AM

The company has been overshadowed by its rivals, but there is much to like in its recent performance.

For some time now, American Express (AXP -1.49%) has suffered in comparison with arch-rivals Visa (V -2.73%) and Mastercard (MA -2.91%). All three have done well lately on the back of a growing global economy and a general move away from cash payments to card transactions. However, Visa and Mastercard's recent results have been superb; compared to them, AmEx's aren't quite that impressive. Still, the company is delivering, and it looks poised to have a strong 2018. Let's examine whether that makes its shares worth owning just now. 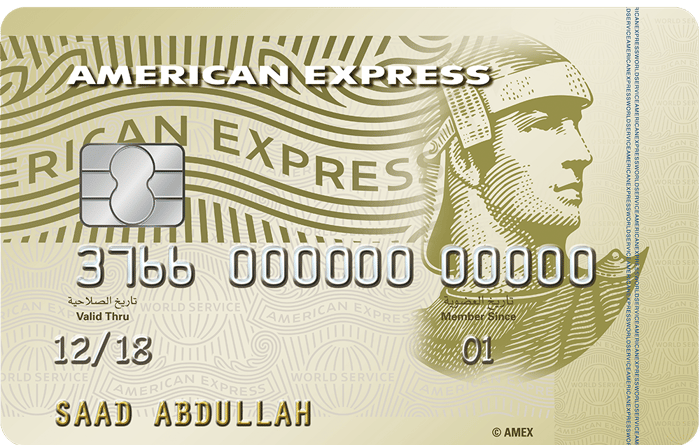 One reason why Visa and Mastercard are more popular is because neither has recently lost a major business partner. In 2016, AmEx was unceremoniously dumped as the exclusive credit card accepted at Costco Wholesale (COST -2.53%) registers, and as the sole co-branding partner of the big retailer's proprietary credit card. And guess which brand replaced it in both positions? That's right, Visa.

This was a stinging loss for AmEx, and it's still recovering. Look at the effect on revenue and profitability starting in mid-2016, when Costco's switch from AmEx to Visa occurred: 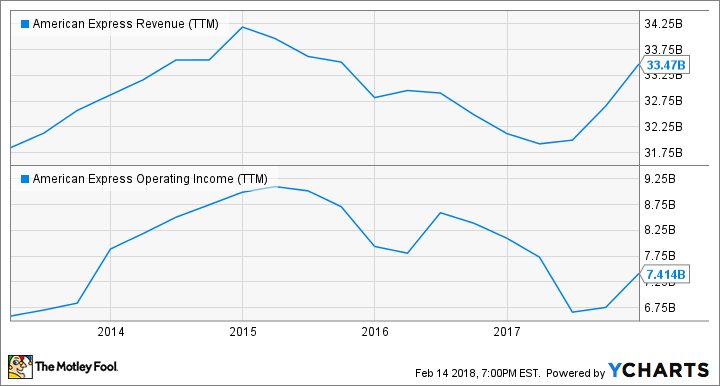 However, AmEx is doing a good job getting on with its life. It's cleverly exploited the great advantage it's always had over the competition -- the exclusivity and, quite frankly, snob appeal of its high-end cards -- by boosting the perks for its "members." It has also sensibly prioritized loan growth; after all, higher loan balances generally mean more take from interest charges.

These moves are working. AmEx members used their plastic more: their total spending rose by 8% on a year-over-year basis in fiscal 2017. Card fees (7% higher), other fees and commissions (up by 10%), and interest on loans (13%) rose at encouraging rates. All outpaced the 6% growth in total expenses, which was driven by heavier spending on member rewards and services.

As a result, total revenue grew by 4% (or 8% if we strip out the last of the Costco-derived revenue), to just under $33.5 billion for the year. Headline net income took a sharp nose dive, but this was due to a huge one-time charge taken in advance of the government's recently passed Tax Cuts and Jobs Act.

Adjusted for that, AmEx booked a per-share net profit of $5.87 for the year, a 4% improvement and well above the company's initial estimates for the period. The bottom line was negatively affected by a sharp (36%) increase in loan-loss provisions, which is worrying some AmEx-watchers. In my opinion, though, this is not overly unusual or suspect for a cautious finance sector company bulking up its loan book.

AmEx clearly expects that its 2017 initiatives will keep the growth train running this year; it's projecting per-share earnings of $6.90 to $7.30 for fiscal 2018. In other words, it believes it'll post growth of at least 17.5%. Meanwhile, its shares are currently priced at an anticipated one-year forward P/E of just over 13, suggesting that the stock is undervalued.

I've been a believer in AmEx's recovery story ever since the death of the Costco relationship, and I'm even more of a bull following these results. The company had good momentum going into this year, and I believe that'll continue -- its members are clearly eager to keep spending money. Signs point to a good 2018 for the company, and now would be a good time to invest in its stock.