Please ensure Javascript is enabled for purposes of website accessibility
Log In Help Join The Motley Fool
Free Article Join Over 1 Million Premium Members And Get More In-Depth Stock Guidance and Research
By Daniel B. Kline - Updated Feb 24, 2017 at 4:42PM

The company took a major risk, but in the end, it turned out to be worth it and then some.

About eight months ago, Costco (COST -3.06%) made a move that could have caused a massive disruption in its business.

The company completed a long-in-the-works plan to drop its longtime rewards credit card company American Express (AXP -2.06%) and replace it with a Visa (V -1.22%) card supplied by Citigroup (C -2.29%). And while the planning for the change took over a year, the actual switch was like pulling a Band-Aid off.

It was a big risk by the company because it wasn't simply changing which company provided its rewards card. Instead Costco, which has historically only accepted one credit card brand in each global market it operates in, had dropped American Express altogether. That made the move more dangerous for the company because in addition to the possibility that some, maybe a lot, of customers would not want to make the rewards card switch, it was also possible that some non-rewards American Express customers -- likely valuable business customers -- would leave the warehouse chain because they might not want to change credit cards. 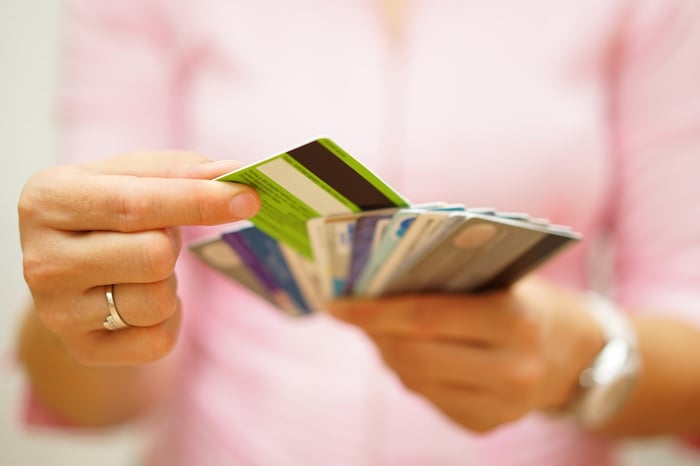 Costco ran the risk of consumers deciding to not make the move to its new credit card. Image source: Getty Images.

How did the change go?

Making a move this big with such an abrupt switch would have been impossible for any company to pull off without problems. Costco was not an exception and in the immediate aftermath of the switch there were more than 1.5 million calls to Citigroup, according to Jennifer Bombardier, a spokeswoman for the card issuer.

"With any conversion of this magnitude and a brand this beloved, call volumes were unprecedented," she told The Motley Fool via email. "As a result, some customers experienced longer-than-desired wait times in the first few days of the launch."

Those wait times however were quickly abated with added personnel and relatively quickly (within a few weeks) the call volumes dropped significantly. After that initial period of confusion customers seemed to understand what had happened, but it was still hard to know if there would be demand for the new card from people who were not members of the previous program.

Costco made the switch in the middle of its fiscal fourth quarter. In Q1, 2017, the first full period since the change was made, CFO Richard Galanti spoke about the transition during the company's earnings call.

Galanti explained that before the switch there were about 11.4 million co-branded Costco/American Express rewards cards from roughly 7.5 million accounts that were transferred over. About 85% of those accounts have been activated. That's a shockingly high number because Galanti previously noted in the Q4 2016 earnings call that the company only considered 85% of the 11.4 million American Express accounts active (meaning a card had been used in the previous 60 days).

Basically Costco kept the same base of rewards cards users through the switch. It's possible some inactive members opted for the new card and some active American Express fans did not, but overall the active user base remained solid. In addition, Galanti said in the Q1 2017 call "since the June 20 cutover several months ago, we have 1 million members that have signed up for [and] have been approved for the new Citi Visa card... In terms of conversion, usage and new sign up for the card, all good so far."

This is a win for consumers and the company

"The new card is great in terms of increased cash back rewards for our members and that's great for us as well in terms of driving member value and sales over the next years, and of course lowering our effective merchant fees related to the new program," Galanti added.

Costco made the switch with minimal damage to its reputation, kept its customer base, has added one million new credit card holders, and increased the fees it takes in from the card provider. The company also delivered a 1% increase in U.S. comparable sales in Q1 which it followed with a 3% gain in December, 2016, and a 6% increase in January 2017.

Making the move from American Express to Visa was fraught with peril, but Costco navigated every challenge well. Now the change is in the past and the new card should drive sales and revenue for years to come.