Fitbit (NYSE:FIT) reported its fourth-quarter results after the market closed on Feb. 26. Despite the launch of the Fitbit Ionic, the company's first full-featured smartwatch, revenue declined compared to the disastrous 2016 holiday quarter.

Fitbit expects revenue to slump again in 2018 even as it launches more smartwatches, including one aimed at the mass market. Here's what investors need to know about Fitbit's fourth-quarter results. 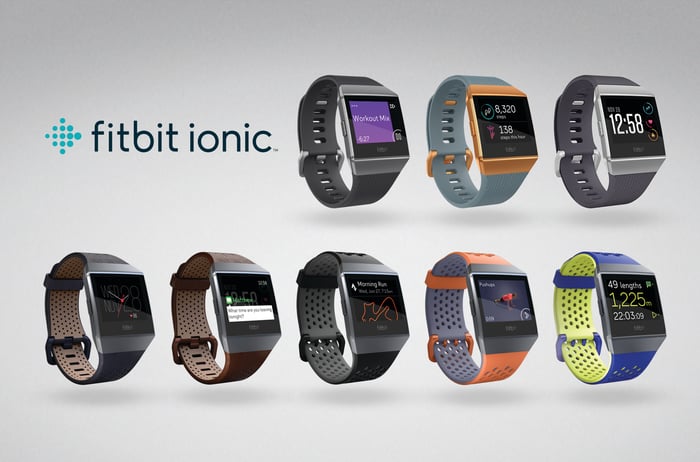 Fitbit provided the following guidance for the first quarter and full year:

The Fitbit Ionic was unable to save the company's holiday season. CEO James Park laid out the reasons why during the conference call:

Ionic sales outpaced the trajectory of our prior highest priced device our legacy GPS watch Fitbit Search. However we had more aggressive goals for Ionic. We believe sales were impacted by aggressive promotional environment, fewer apps available at launch, the delay in the availability of SDK.

Fitbit built its own operating system for the Ionic, which led to a small number of available apps at launch. A high price tag was also undoubtedly a factor.

Fitbit plans to launch more smartwatches in 2018, including some aimed at the mass market. Park explained: "We believe there is significant opportunity to increase our share category and drive the growth of wearables around the globe by expanding reach to new demographics and leveraging new enterprise channels for distribution and attracting new audiences at the launch of a mass appeal smartwatch offering in 2018."

Despite the launch of the Ionic, Fitbit was unable to grow revenue during the fourth quarter. What's worse, its guidance for the first quarter and the full year call for even steeper revenue declines. Fitbit's dominance of the fitness tracker market doesn't mean much when demand is quickly shifting toward smartwatches.

The company is trying to adapt, with plans to a launch more smartwatches this year. The heavy lifting of building out the software was completed with the Ionic, so Fitbit should be able to bring new products to market at a swifter pace. But with Fitbit's first attempt falling short, and with fierce competition in the smartwatch market, success is far from guaranteed.