Please ensure Javascript is enabled for purposes of website accessibility
Log In Help Join The Motley Fool
Free Article Join Over 1 Million Premium Members And Get More In-Depth Stock Guidance and Research
By Timothy Green – May 23, 2017 at 9:00AM

The company's push into Apple territory won't be easy.

Fitbit (FIT) had a terrible first quarter by any measure. Revenue tumbled more than 40% on a 37.5% decline in device unit sales. Gross margin dropped more than 6 percentage points year over year. The company posted a net loss of $60 million because of weak sales, and that included a $30 million tax benefit. Guidance was no better, calling for a steep decline in revenue and major losses in 2017.

Despite those results, analysts were expecting worse. Fitbit beat expectations for both revenue and earnings, sending the stock soaring the following day. Shares of Fitbit gained more than 12%, giving investors who have watched the stock crash over the past year a welcome reprieve.

Unfortunately for those betting on the fitness-wearables company, that optimism didn't last. The stock has since given up its post-earnings bump, putting it right back where it started before the first-quarter report. 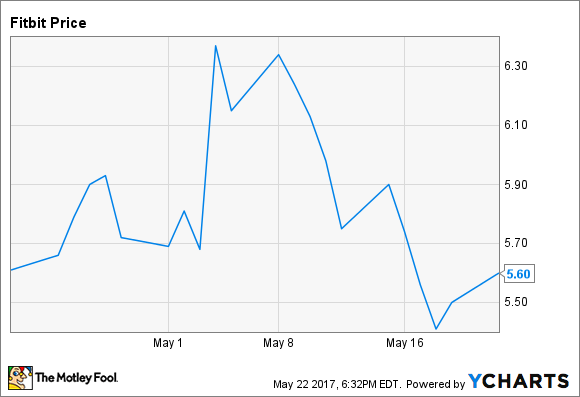 Fitbit needs to do more than beat rock-bottom expectations for the stock to truly recover. New devices, such as Fitbit's upcoming smartwatch, need to be good enough to compel existing Fitbit users to upgrade. Its latest slate of new products, which includes the Charge 2, Flex 2, and Alta HR, have so far failed to spur the kind of upgrade cycle necessary to prevent steep revenue declines.

Fitbit hasn't officially announced its smartwatch, but management discussed the upcoming product in the company's earnings conference call. Fitbit sees its customers wanting more fully featured devices, and it plans to eventually roll out "offerings beyond the wrist" to fill out its suite of products. With demand for basic fitness trackers in the U.S. seemingly peaking, diversifying into new product categories isn't a bad idea.

But Fitbit's push into smartwatches won't be easy, for a couple of reasons.

Fitbit is reportedly having problems with its upcoming smartwatch. Yahoo! Finance reported in April that the company was forced to redesign the GPS antenna because of poor signal performance, delaying the launch by months. Waterproofing has also been problematic, according to the report.

Fitbit will eventually figure out the hardware issues, but the bigger problem is software. If you're going to sell a $300-plus smartwatch, high-quality hardware is table stakes. The Apple Watch is the gold standard, and there are plenty of less expensive Android Wear devices with solid hardware as well. Fitbit needs to get the hardware right, but even if it builds the best smartwatch on the market, the ecosystem around the smartwatch will be even more important.

Fitbit is reportedly having trouble in the software department already, with rumors that Fitbit's app store won't launch alongside the device. Once the app store is ready, Fitbit needs to persuade third-party developers to embrace the platform. If we learned anything from Microsoft's failed Windows Phone effort, that will be a monumental challenge.

Android Wear looks likely to become the non-Apple standard. Fossil, which owns the fitness-tracker company Misfit, plans to launch the $199 Misfit Vapor, powered by Android Wear 2.0, later this year. The company gave up on its own OS, probably because of the challenge of building an ecosystem. Other companies, including ZTE, Huawei, New Balance, LG, and Lenovo have also embraced the platform. Samsung is going its own way with its Tizen operating system for its smartwatches, but the company has the resources to make it work.

Yet another smartwatch ecosystem will be hard to justify, and persuading consumers to buy a smartwatch with an inferior assortment of apps will be difficult, to say the least. If Fitbit's smartwatch ends up being a dud when it launches later this year, the stock could remain depressed as investors lose even more faith in the company.