It's not your standard earnings release when a clinical-stage biotech announces a quarterly update. Usually, financial results aren't nearly as important as pipeline news. That was certainly the case for Celldex Therapeutics (NASDAQ:CLDX) in November, when the company reported its third-quarter results.

And it was the same story on Wednesday, when Celldex announced its fourth-quarter and full-year 2017 results. Although the biotech provided an update on its financial condition, the most important story related to several key pipeline developments. Here are the highlights from the fourth-quarter update. 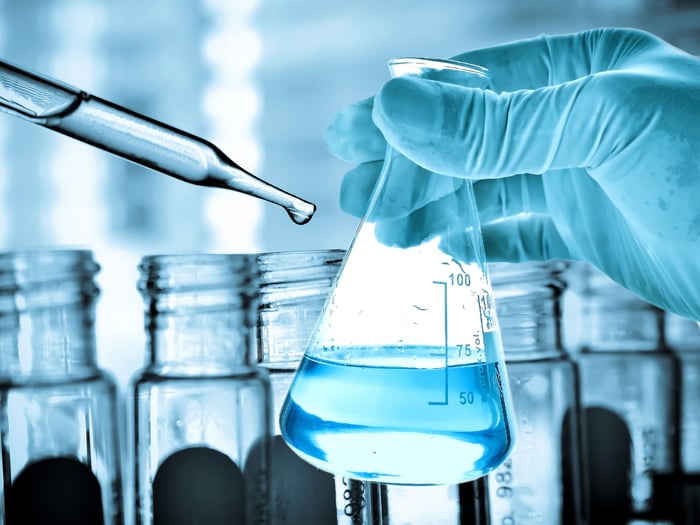 All of Celldex's revenue at this point in the company's life stems from licensing, contracting, or grants. In the fourth quarter of 2017, the biotech made nearly $2.8 million from contracting and grants, with $665 million coming from product development and licensing agreements. The solid year-over-year increase in total revenue resulted primarily from manufacturing service agreements with the International AIDS Vaccine Initiative and Frontier Biotechnologies, Inc.

This increase in revenue helped Celldex's fourth-quarter bottom line improve to some extent. However, a bigger positive impact came from a one-time tax benefit of $19.1 million recorded in the fourth quarter.

The most important financial metric for Celldex was its cash position. At the end of 2017, cash, cash equivalents and marketable securities totaled $139.4 million, down slightly from  $140.5 million as of Sept. 30, 2017. Celldex used $19.5 million for operating expenses in the fourth quarter, but raised an additional $18.4 million in net proceeds from a stock offering.

Celldex highlighted several important pipeline developments made in the fourth quarter or earlier this year. These include:

Celldex CEO Anthony Marucci looked back at the year that was and what lies ahead:

2017 was a significant year for Celldex. Notably we completed enrollment in the Metric study of glembatumumab vedotin for patients with triple negative breast cancer whose tumors overexpress gpNMB. We are hopeful that glemba will offer patients, families and caregivers a potential new option, where there are few approved therapies and none that target gpNMB, which is associated with a more aggressive form of the disease... In 2018, we expect to present data across multiple programs and execute across our clinical pipeline of novel biologics to improve outcomes and change the standard of care for patients who suffer from life-threatening diseases.

By far, the biggest thing for Celldex investors to look forward to is the top-line primary endpoint data from the Metric study of glemba in treating triple-negative breast cancer. This data is expected in the second quarter. If results from the study are positive, Celldex plans to work with the U.S. Food and Drug Administration for a potential regulatory filing for glemba in the second half of 2019. It's no exaggeration that 2018 could be the biotech's best year yet if the Metric study is successful.

The phase 2 combo studies with established cancer drugs also are ones to closely watch. Celldex and Bristol-Myers Squibb expect to report preliminary data from the study of varli and Opdivo at medical meetings later in 2018. Results from the study of CDX-3379 and Erbitux, which Celldex is running on its own without assistance from Lilly, could be available by the end of 2019.