Wall Street thinks that the clinical-stage biotech Celldex Therapeutics (NASDAQ:CLDX) could be a top-performing stock this year. The average 12-month price target on the stock, after all, implies a noteworthy 260% upside potential from current levels.

Why are some analysts so excited about this small-cap biotech stock? The big ticket item, if you will, is the upcoming top-line data readout for the company's experimental breast cancer drug, glembatumumab vedotin, or "glemba" for short. The heart of the matter is that a successful trial result here has the potential to transform Celldex into a cash flow positive operation within a few short years. 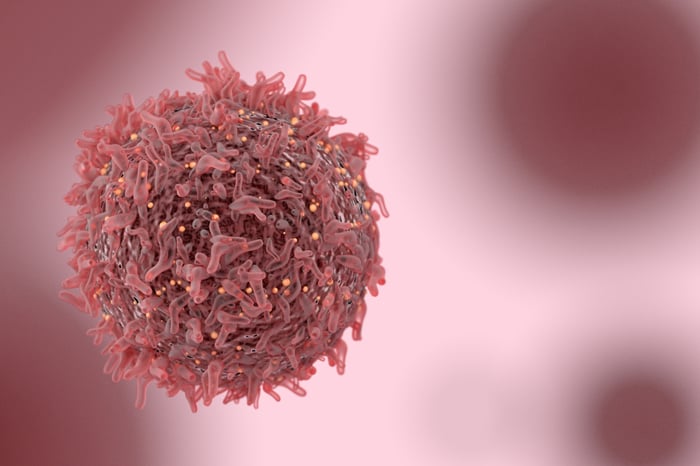 As clinical trials are inherently risky endeavors, however, investors need to carefully weigh the benefits of a positive outcome in this trial, versus the downside risk that would come with a failure. So, with this binary outcome in mind, let's consider Celldex's chances of breaking out in 2018.

Celldex's glemba belongs to a class of targeted therapies known as antibody-drug conjugates, or ADCs. The core concept is that ADCs link a cytotoxic payload to an antibody that targets specific cell surface proteins that are overexpressed in cancer cells.

In this case, glemba is indicated for triple negative breast cancer (TNBC) patients whose tumor cells make a transmembrane protein called glycoprotein NMB (GPNMB). When present, GPNMB is associated with higher rates of metastases across a number of solid tumors including TNBC -- leading to demonstrably lower periods of disease-free and overall survival.

Turning to the numbers, the American Cancer Society estimates that approximately 15% to 20% of all breast cancer cases are triple negative -- patients where estrogen, progesterone, and human epidermal growth factor receptor 2 are not overexpressed (aka "TNBC"). Of these TNBC cases, Celldex has stated that around 40% of these patients also overexpress GPNMB, making them potential beneficiaries of glemba. There are currently no FDA-approved therapies for this particular TNBC sub-group, after all.

What these facts and figures really boil down to is that glemba has the very real potential of generating upwards of half a billion in peak annual sales for this niche indication -- even if it's only prescribed as a later-line therapy.

How is such a monstrous sales figure even possible for a niche cancer drug? It all comes down to price. Seattle Genetics and Roche (OTC:RHHBY), for example, have been pricing their FDA-approved ADCs in the range of $100,000 to $120,000 per patient per year. Celldex, therefore, would likely follow suit with glemba if the drug pans out -- especially since glemba may be only suitable for, say, 3,000 to 4,000 TNBC patients in total for its first indication.

Glemba's pivotal Phase 2b trial is on track to readout by the middle of this year. The study's primary endpoint is glemba's ability to extend progress-free survival (PFS), compared to patients receiving Roche's Xelodea.

The good news is that PFS has historically been an easier hurdle to overcome than overall survival in oncology trials. The bad news is that Xelodea has been shown to be a fairly potent drug in TNBC in general. So, glemba isn't exactly being pitted against a straw man in this trial. And this fact is probably why Celldex's shares are still trading under $3 less than five months from this major clinical readout.

Will Celldex prevail and surge to new heights? Unfortunately, there is no reliable way to handicap glemba's chances of success in TNBC, but an interesting trend has been developing for Celldex's short interest over the past few months. Namely, short-sellers have been steadily shying away from Celldex since last May: 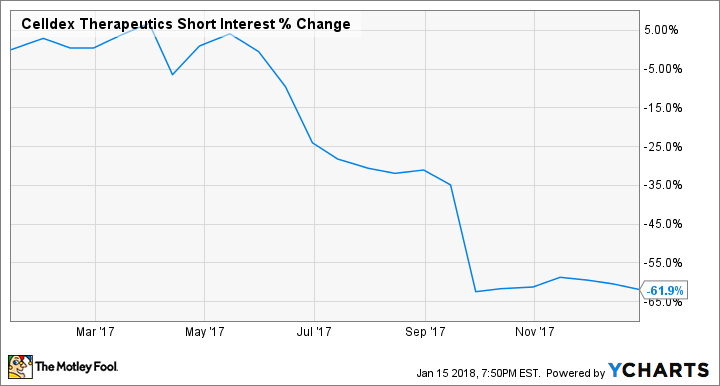 Although short-interest is in no way a good predictor of a given clinical outcome, this negative trend does suggest that at least some of Wall Street's most savvy investors think that glemba has a realistic shot in TNBC.

From a pure risk-to-reward standpoint, Celldex is arguably an intriguing, albeit speculative, buy during the early part of 2018. If glemba fails, the company does have other clinical assets that should keep its shares from becoming worthless. So it might be worthwhile to take a chance on this speculative biotech in light of its eye-popping upside potential. That said, this stock isn't for the faint of heart, as a clinical setback could take years to recover from.