Biotechnology stocks performed exceptionally well last year, and this positive trend appears set to continue in 2018. As such, investors may want to kick off the new year by adding some of these high-growth equities to their portfolios.

Which biotech stocks are poised to surge higher in 2018? My top three biotech stock picks this year are Amgen (NASDAQ:AMGN), Celldex Therapeutics (NASDAQ:CLDX), and Novavax (NASDAQ:NVAX). Here's why. 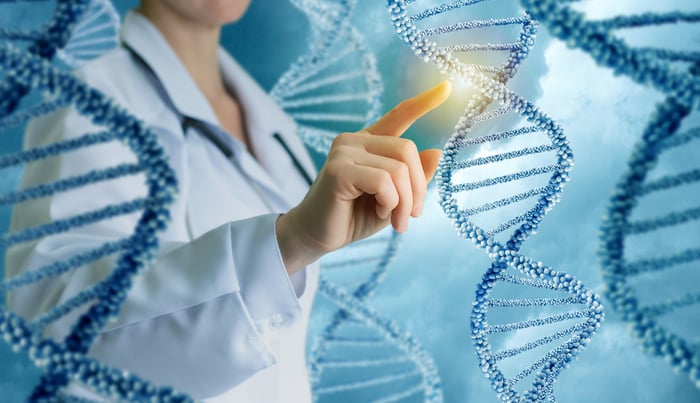 Despite struggling with the loss of exclusivity for its white blood cell booster franchise, Amgen's shares still rose by a handsome 18.9% in 2017. The biotech's success last year stemmed from several things: the growing optimism toward the cardiovascular disease drug Repatha and its ground-breaking migraine drug candidate Aimovig (co-developed with Novartis), as well as the Republican-inspired tax reform that should be a major catalyst for Amgen moving forward. Amgen, after all, reportedly has nearly $39 billion in cash parked overseas that could be put to use in the United States.

In anticipation of the pending tax reform, Amgen announced a stately 15% hike to its dividend last month, bringing its forward-looking yield to 3.04%. Investors are already starting to enjoy the benefits of this newly minted tax legislation. But Amgen's next move as it repatriates cash probably won't get investors too excited.

Specifically, the drugmaker likely will choose to address its unfavorable debt-to-equity ratio that presently stands at a hefty 111%. While paying down debt instead of pursing a largish acquisition may not sound like a solid catalyst, the broader view is that a stronger balance sheet is always a positive for long-term investors. After all, a number of biopharmas that leveraged their balance sheets to the max in their quest for growth ended up getting punished by the market when things didn't go as planned.

Amgen's stock should perform well again this year, thanks to its growing cohort of new growth products, an attractive dividend yield, and a cleaner balance sheet.

Celldex is a small-cap biotech stock that's now on the proverbial launch pad. Unfortunately, it's not altogether clear whether the company is set to take flight or blow up in 2018.

The catalyst? Celldex is barreling toward the pivotal readout of its mid-stage study assessing glembatumumab vedotin -- or glemba for short -- in triple-negative breast cancer (TNBC). The readout is scheduled to occur sometime in the second quarter of 2018. If positive, Celldex could finally shake off the failure of its former lead drug candidate, Rintega, in brain cancer, and perhaps even transition into a commercial-stage company.

The flip side is that another major clinical failure will put the company in a serious financial bind, and the market will likely ignore the value proposition of its remaining pipeline candidates almost completely for an extended period of time.

Why do I like this high-risk, high-reward stock in 2018? The long and short of it is that glemba has the potential to become a game-changing targeted therapy for TNBC, and that means several hundred million in sales are quite possible if its ongoing midstage study pans out. In short, Celldex's stock could quickly double this year if glemba is the real deal.

Even in a worst-case scenario, this stock won't be totally doomed, given that the company has other clinical assets in development. I freely admit, though, that it could take years for Celldex's share price to recover if glemba turns out to be another dead end.

The synthetic vaccine-maker Novavax has had a rough go of it ever since its experimental respiratory syncytial virus (RSV) vaccine failed in a late-stage trial for older adults. However, this down-and-out biotech might be nearing an inflection point.

Last month, the company announced that it was readying a combined Phase 1/2 data package for the Food and Drug Administration for its experimental flu-vaccine candidate dubbed "NanoFlu." The data package is reportedly on track to be completed by February -- giving investors a clear line of sight for Novavax's next major catalyst.

As a more effective alternative to Sanofi's market-leading Fluzone High-Dose product, Novavax stands a chance of generating billions in sales from NanoFlu. Obviously, this eye-popping commercial opportunity is far from a certainty, but it does show that Novavax is targeting big game with its synthetic vaccine platform.

Additionally, Novavax, in the same press release, noted that it's targeting mid-2018 for an interim update for the ongoing maternal RSV immunization study. If this study isn't halted for futility, the biotech's shares could rip higher. An effective RSV vaccine for newborns, after all, should easily rack up blockbuster-level sales.

The caveat with Novavax, however, is that if the company whiffs on these upcoming clinical catalysts, it will probably be dead in the water. The company lacks the financial flexibility to start a new line of clinical inquiry, or grab external candidates via a licensing deal. I'd caution investors against buying more than they can lose with this promising, yet risky, biotech.