Please ensure Javascript is enabled for purposes of website accessibility
Log In Help Join The Motley Fool
Free Article Join Over 1 Million Premium Members And Get More In-Depth Stock Guidance and Research
By Alex Carchidi - Apr 10, 2021 at 6:13AM

Not at its present valuation, it's not.

Biotechs are some of the riskiest -- and sometimes the most rewarding -- investments around, and for good reason. Buying a stock in a totally unproven company that doesn't even have a product or any revenue means taking on a lot of uncertainty, both for good and for ill. Making a move before anyone else can see the value in a company's therapy candidate isn't an exact science, and investors need at least a little bit of luck along the way if they're going to get rich.

Celldex Therapeutics (CLDX 5.78%) is developing immunotherapeutic antibodies that could one day be used to treat seemingly intractable diseases like metastatic pancreatic cancer and urticaria. The company's efforts are just getting started, and it must complete a marathon of clinical trials in the years ahead before it can hope to report any earnings. But that's exactly what could give this stock the potential to make millions for people who buy it at the right time. 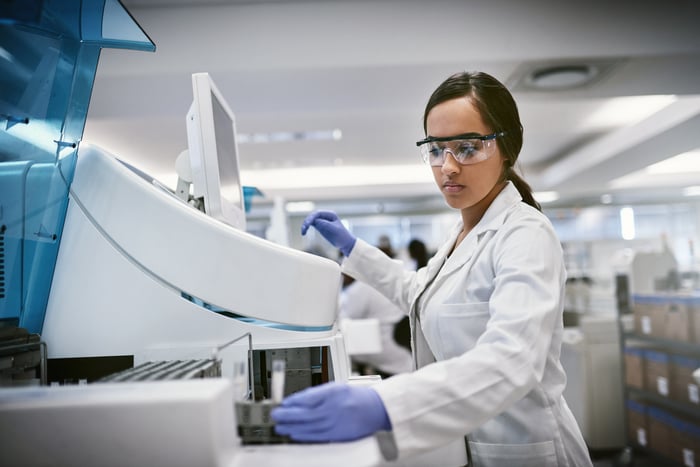 Why Celldex could be huge

The biggest factor in investors' favor is that Celldex's pipeline is very early stage. Its three antibody-based immunotherapy programs are all in phase 1 of clinical trials. That means there's a very large risk that the projects won't pan out and become commercialized. So, the market's valuation of them is relatively low, as their future cash flows are both quite distant in time and highly uncertain.

As the projects move through the clinical trial process, their future value will increase precipitously as the future cash flows become more imminent and also (somewhat) more assured. And that's where people who buy the stock today will benefit, as the market adjusts the price upward -- or downward, like what happened after one of Celldex's recent interim trial results reports for a potential cancer treatment -- to reflect the new information pertaining to the rising value of the projects. Any updates regarding preliminary results or announcements of new programs will likely have a similar effect.

In short, Celldex shareholders will benefit from the progress in the drug development process over time, if things go as planned. Assuming that there aren't any major setbacks, how large might that benefit be?

At the moment, that's a hard question to answer. The company hasn't finalized the target disease (and therefore the target market) for any of its three programs. Still, management suspects that there are multiple conditions that could be addressed by its two oncology projects, CDX-1140 and CDX-527. Its mast cell disease program, CDX-0159, is especially promising. In a phase 1b clinical trial examining its safety profile in patients with chronic inducible urticaria, a preliminary data update reporetd that 80% of patients had a complete response to treatment.

Thus, given the information that's currently available, investors can estimate that the company would be able to capture revenue in a variety of different cancer therapy markets as well as potentially the mast cell therapy market. That makes the stock slightly less risky, and it also suggests that revenue might be very substantial if the drugs are commercialized. 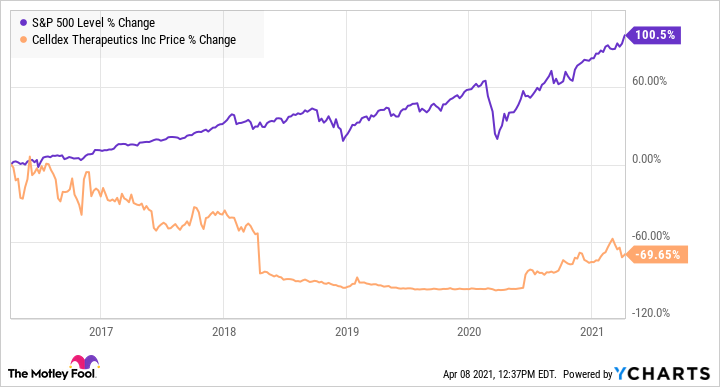 While time may be on the side of people who invest in Celldex now, I wouldn't bet on the stock minting any new millionaires. Its valuation seems overextended for an early stage biotech with no mature therapies, no prestigious collaborations, and no recurring revenue. Compared to the biotechnology industry's average price-to-sales (P/S) ratio of 8, this stock's multiple is 89.54. That means investors will be paying quite a bit relative to its revenue.

Of course, the P/S is a flawed tool to value a pre-product biotech company, as minimal revenue is to be expected, but Celldex's sky-high multiple still points to the lack of incoming cash in the form of collaborations and licensing. In a nutshell, other early stage biotechs have lower P/S ratios because of their development deals with larger companies that yield more revenue than Celldex reported, even if it isn't much.

As I noted late last year, the stock had a wild run of growth in 2020 stemming from initiating dosing in one of its phase 1 trials. People who purchased the stock at the start of that expansion roughly 12 months ago have a shot at becoming millionaires because their investment would have grown more than 1,100%. Unfortunately, it's nearly impossible to repeat such rapid growth for multiple years in a row.

Nonetheless, Celldex could be a lucrative purchase at its current price, given the multi-market potential of its current therapy candidates. Buying it now and holding it for the next seven to 10 years would ensure that investors capture value from the summation of new programs, progress in existing programs, and revenue from commercialization.

But remember: In its present form, Celldex is a highly speculative investment, so it should be a small part of a larger and well-diversified portfolio. It may not make you into a millionaire, but it could well make you richer if you invest in it properly.

2 Biotech Stocks That Keep on Climbing