Many casual dining brands have suffered in recent years largely because the market has gotten crowded. Consumers have to choose between the low prices offered at fast food establishments, the higher-end food at many fast-casual chains, and getting table service at a casual chain.

That has resulted in longtime leaders like Dine Brands Global's (NYSE:DIN) Applebee's and Brinker International's (NYSE:EAT) Chili's closing locations. Part of the reason that happened is that in going after new customers, both chains lost sight of their most-loyal visitors.

Both of those brands have since cut back their menus and refocused on serving their core audience. In theory, that should help them build customer loyalty and create a moat against competitors. That does appear to be working as both Applebee's and Chili's rank in the top-20 of Foursquare's first-ever Casual Dining Loyalty Index which examined loyalty trends at Restaurant Business Online's top casual dining chains by revenue. 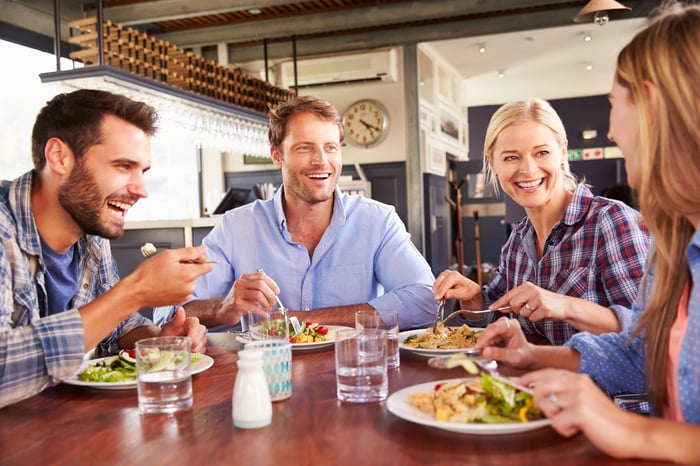 What does the report measure?

Foursquare, which calls itself a location technology company, measured dining trends "from a nationally representative group of U.S. consumers who make up our always-on foot traffic panel," according to a press release. The company measured loyalty using four metrics:

Which eatery came out on top?

Buffalo Wild Wings, which was acquired by Arby's Owner Roark Capital Group took the top spot led by strong scores in Share of Wallet and its Market Penetration. The chicken wing chain also scored well in Fanaticism "due in part to a contingent of super fans most likely going wild for the chain's Blazin' Rewards loyalty program, which expanded in 2017 to serve all 1200+ locations," according to a blog post by Foursquare Senior Vice President Michael Rosen.

Overall, restaurants where bars play a key role, did very well. Alcohol, specifically beer, seems to drive loyalty. In addition, many of the top-ranked chains tapped into current taste trends.

"For instance, we're seeing chains adding grilled options to the menu as an alternative to fried food in response to customer demand," wrote Rosen.

A number of the public companies on this list have struggled, including not only Chili's and Applebee's, but also IHOP (another Dine Brands Global chain) and BJ's Restaurant and Brewhouse (NASDAQ:BJRI). At least some of the private companies on this list have struggled as well with both Uno Pizzeria & Grill and Hooters making changes amid slumping sales. It's very likely that a significant portion of the list above has faced sales challenges.

That suggests that these chains can build customer loyalty, but the entire CDR segment needs more customers. That's not an easy task when you consider that competition for diners with quick serve/fast food and fast casual restaurants is only likely to increase.

Still, not all is bleak. Bloomin' Brands (NASDAQ:BLMN) Outback Steakhouse saw comparable restaurant sales rise by 1.8% at its U.S. stores in 2017. That was driven, according to CEO Liz Smith's fourth-quarter earnings release comments by investing in the customer experience. And, while it's still very early in the game, BJ's has experienced positive results by investing in a new slow-roast menu and adding delivery at some of its locations.

These success stories show that it's possible to win back market share, but it will require innovation and investment to do so.