We all love a good restaurant meal, and there's something to be said about feasting on delicacies without having to do an ounce of cooking or cleanup yourself. But while there's certainly nothing wrong with indulging every so often, it seems as though Americans are taking the concept of eating out to an extreme. From 2015 to 2016, for the first time in history, Americans spent more money at bars and restaurants ($54.857 billion) than they did on groceries ($52.503 billion). And while data from previous years still show grocery sales edging out restaurants and takeout, that shrinking margin points to a serious spending problem among consumers.

According to the Bureau of Labor Statistics, in 2014, the average American household spent $2,787 on restaurant meals and takeout, compared to $3,971 on groceries. But in 2015, the average amount spent on restaurants and takeout jumped $221 to $3,008. Grocery spending, by contrast, increased just $44 per household to $4,015. What this tells us is that dining at restaurants and ordering takeout aren't just luxuries anymore. Rather, they're becoming the norm. And our finances are hurting as a result. 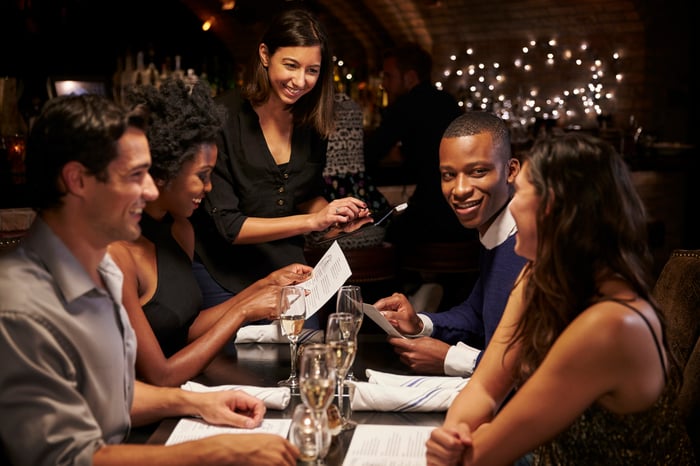 What all that fancy food is costing us

Recent data reveal that 69% of Americans now have less than $1,000 in a savings account. These findings are consistent with a report from the Federal Reserve Board confirming that almost 50% of Americans don't have $400 on hand to cover an unplanned expense or emergency. And while our dining habits aren't necessarily to blame for our collective lack of savings, they certainly don't seem to be helping matters.

Of course, we all need to eat, which means food must account for a portion of our monthly spending. But there's a big difference between buying groceries and paying for restaurant meals and takeout. Most food establishments charge a 300% markup on the items they serve. This means that any time you spend $15 on an entree, the food you're eating only costs $5 to make. The fact that the average American family spends just over $3,000 a year on prepared food means we're all cheating ourselves out of an annual $2,000 -- money that could be instrumental in padding our emergency funds, getting out of debt, or saving for the future.

Let's get one thing straight: If you earn more than enough money to cover your monthly bills, have plenty of cash in savings, and are on track for retirement, then by all means, spend what you want on restaurant meals. But unless you're in a great spot financially, dining out multiple times a week could have serious consequences.

First of all, no matter how much you earn, it's crucial to have an emergency fund so you're prepared for the unexpected. Most people need three to six months' worth of living expenses in an accessible savings account, but if you have variable income or multiple dependents, it pays to aim even higher. If you're behind on emergency savings, cutting back on restaurant and takeout meals could be an easy step to help bridge that gap.

Secondly, if you're carrying credit card debt, lowering your dining costs could help you pay off your balance sooner -- and that's a move that can save you money on interest charges over time. Imagine you owe $2,000 on a credit card with 20% interest, and it takes you three years to pay it off. By the time that debt is wiped out, you'll have wasted $675 on interest charges. On the other hand, if you cut back on dining out so that you're able to repay that balance in half that time, you'll spend almost $350 less on interest.

Finally, think about what that extra money might do for your retirement savings. Imagine that instead of wasting $2,000 a year on restaurants and takeout, you invest that money and generate an average annual 8% return. After 20 years, you'd have an extra $91,000 for retirement.

Remember, too, that you don't have to cut out restaurant meals entirely to make a difference in your finances. Eliminating just two or three meals a month could put $1,000 back in your pocket over the course of a year. And since eating at home more often will probably be better for your health, it's a move that will benefit you in more ways than one.