Shareholders of leading recreational vehicle manufacturer Thor Industries (NYSE:THO) are used to tracking the company's order backlog, both as a measure of its overall health, and as a reading on RV industry demand in general. In the second quarter of its fiscal 2018, which ended Jan. 31, total backlog increased by nearly 40% year over year to $2.8 billion.

This is a pretty impressive surge, but there's a caveat. And it's one that might help explain Wall Street's negative reaction to Thor's stellar earnings report. The North American RV giant's unfilled order book actually declined sequentially from its fiscal Q1. Thor defines its backlog as unfilled dealer orders, and typically, total order backlog on a measurement date (quarter-end or year-end) is expected to be fulfilled within a year. Let's unpack a few observations from the chart above.

First, the drop-off between Q1 and Q2 doesn't seem extremely unusual, given that the Q1 number represented both a significant leap from Q4 and an all-time peak in Thor's order backlog.

Second, trimming down a record backlog isn't in itself deleterious. A high backlog on one measurement date can indicate healthy sales on the next. For example, the record number of unfilled dealer orders in the Q1 provided a hint that Q2 revenue had the potential to outperform. Indeed, revenue that quarter rose 24% versus the prior-year quarter. That's especially notable since Thor's fiscal Q2 covers the months of November, December, and January -- seasonally low sales months in the RV business.

This dynamic between backlog and forward sales occurs because Thor typically recognizes revenue when its product is "FOB (free on board) shipping point." This means that Thor doesn't record an RV sale until the finished vehicle leaves its manufacturing facility en route to the dealer. So you can see how a big production month can leave a nice impact on Thor's financials: The more product it ships, the more revenue the company can recognize during a given period. 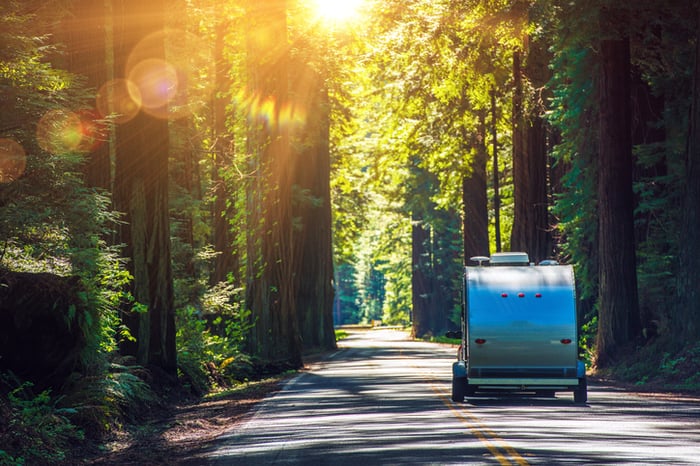 Consequently, Thor's executive team is keen on boosting production, and has used positive operating cash flow to increase its manufacturing capabilities, investing $115 million in capacity-boosting initiatives during fiscal 2017. In a recent earnings presentation, management noted that in the last year, Thor has completed manufacturing expansion projects at its Keystone, Jayco, Heartland, Airstream, and Thor Motor Coach facilities. It has poured another $63 million into manufacturing-related capital expenditures in the first half of the current fiscal year.

Given all that, why might investors be spooked by a recent record backlog and higher production? I believe this back-of-the-envelope calculation can offer some illumination. Thor recorded Q2 2018 revenue of $1.97 billion. We can see from data in the chart above that between the first and second quarters of the year, total backlog declined by roughly $800 million. Thus, we can surmise that roughly 40% of Thor's $2 billion quarter was achieved by clearing out older orders which, on a net basis, weren't replenished with new orders.

Another way of saying this is that Thor produced older, waiting orders faster than it added new ones during the second quarter. Investors appear to have expected a higher follow-through of demand after the record order surge. And oddly, judging from its recent stock price moves, Thor was penalized by the market for achieving higher production rates in Q2, as investors focused on the net drop-off in backlog, while ignoring its positive implications.

Of course, shareholders tend to be fickle from quarter to quarter when a company exhibits the kind of growth Thor has over the last few years. Taking a broader view, both quarterly revenue and order backlog are in a stable upward trend, despite near-term order fluctuations.

Finally, it's important to focus on the quality, as well as the quantity, of unfilled orders. The record Q1 backlog was propelled by demand for products in the company's towable RV segment, which comprised roughly 70% of the total backlog. The rest was supplied by its motorized RV business. As I explained earlier this year in more detail, Thor is capitalizing on demand from younger customers, who are more likely to buy less-expensive towed vehicles rather than full-fledged motor homes. This demographic is only growing, so it makes sense for Thor to ratchet up its capacity to meet the demand. Thus, if you're a long-term shareholder, keep your eye on Thor's backlog, but I believe it's prudent to view each reading within the context of the larger trends of this growing business.