Recreational vehicle manufacturer Thor Industries, Inc. (NYSE:THO) has enjoyed a string of successful quarters -- most recently in the first quarter of fiscal 2018 (three months ended Oct. 31), results of which the company reported in late November of last year. Thor posted eye-opening metrics, including record revenue that increased 30.6% to $2.23 billion against the prior year and record net income of $128.4 million, representing an increase of 63.1%.

These types of numbers undergirded a stock rally in 2017 during which Thor shares soared more than 52% on a total-return basis. In this article, we'll review factors behind Thor Industries' recent outperformance, and discuss whether the company can continue its upward trajectory in 2018.

One thing Thor Industries doesn't have to fret over is the market for its products. Consumers spend $887 billion on outdoor recreation annually, according to the Outdoor Industry Association. Within this massive industry, which employs 7.6 million people, the subset known as the RV industry is flourishing. A recent investor presentation by Thor notes that annual industry RV shipments have increased at a compounded annual growth rate, or CAGR, of 10% since 2010.

RV industry expansion is being driven by increased consumer confidence due to steady, if slow, economic growth and moderate wage growth. More pertinently, demographic trends have translated into new opportunities for this once-stagnant industry. The typical RV buyer of today is more ethnically diverse and younger than just a few years ago. Thor points out that Latinos, Asians, African Americans, and other ethnicities comprised 39% of new campers in 2016 and that Gen Xers and millennials comprised 72% of campers in 2016. These trends together have created a new wave of potential RV buyers.

How Thor has differentiated itself 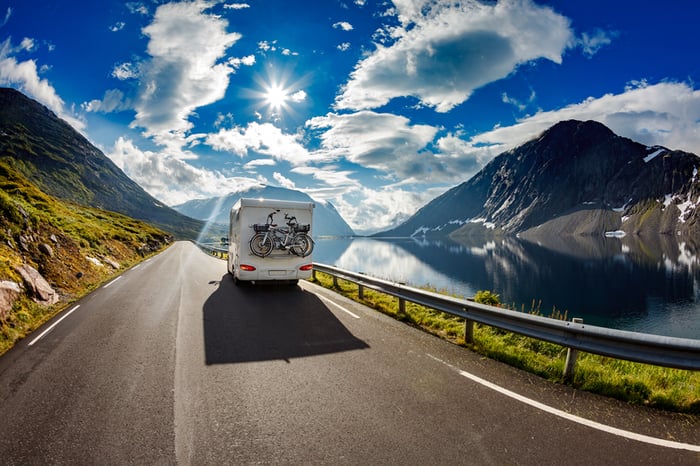 The popularity of less expensive towable trailers has proved a catalyst in Thor Industries' business. In the first quarter of fiscal 2018, for example, while the motorized segment enjoyed a 22.8% increase in sales to $566.6 million against the comparable period, the towables segment improved at a rate of 33.7%, booking sales of $1.62 billion.

Thor isn't alone in capitalizing on the vigorous demand for towable trailers: Competitor Winnebago Industries (NYSE:WGO) boosted its own fiscal first-quarter 2018 towables revenue by 83%, via its acquisition of towables manufacturer Grand Design RV and strong organic growth in Winnebago-branded trailers. But Thor Industries has differentiated itself from its rivals in a distinct way. It's used the cash flow generated from vigorous growth in towables to invest in production capacity and pay down debt.

During the 2017 fiscal year, Thor produced $419.3 million in operating cash flow. The company invested $115.0 million of this positive cash flow last year in projects to increase production capacity. This is an extremely efficient use of capital when you consider that Thor is sitting on a $3.6 billion backlog as of the first quarter of 2018, which itself grew nearly 70% year over year.

Thor used another $215 million of its operating cash surplus to slash total long-term debt of $360 million by 60%, leaving a balance of just $145.0 million at year-end. By the end of Q1 2018, long-term debt stood at $90.0 million. In a subsequent note to first quarter fiscal 2018 financial statements, the company reports that it's reduced borrowings further, to just $80 million as of Nov. 27. The original $360 million of debt was incurred to finance the acquisition of the company's Jayco subsidiary in 2016, and management appears to be on track to fully extinguish this obligation in the current fiscal year.

What could go wrong in 2017? The primary external threat Thor faces is the perennial possibility of an economic slowdown. The cyclical RV industry typically endures headwinds during recessions, as consumers direct spending from discretionary items toward basic staples and necessities. But Thor's backlog, plus a low-fixed cost, flexible production model, should help it adjust to changing demand levels in the event of an economic downturn. Indeed, management likes to point out that since its founding in 1980, Thor has never experienced an unprofitable year.

A company hitting its stride

Thor's operating cash flow looks set to increase in tandem with more revenue growth during the current fiscal year. Operating cash flow has expanded at a breakneck CAGR of nearly 29% over the last five years. This will help the company improve working capital, fortify its balance sheet further, and gear up for more capacity investments and acquisitions.

After a fine run in 2017, is Thor's stock currently too dear? Despite steep appreciation, the company's forward price-to-earnings ratio of 16.6 is well below the 21.2 forward P/E currently held by the discretionary consumer sector of the S&P 500 index. The S&P's discretionary sector counts as an approximate benchmark, as Thor's $8.0 billion market capitalization means it's a mid-cap, rather than a large-cap stock.

For a more fine-tuned comparison, let's return to competitor Winnebago. Though Thor holds the No. 1 market positions in both motorized and towable sales by revenue, it's undervalued versus Winnebago on both a forward P/E and EV-to-EBITDA basis: 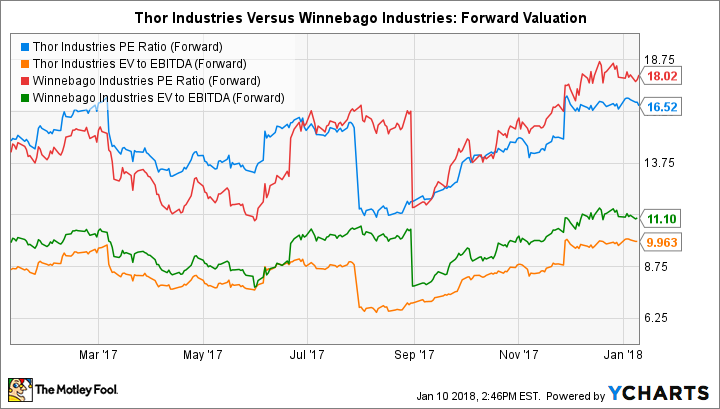 In sum, given its reasonable valuation, rising revenue, and strong cash flow, Thor Industries has room for further appreciation in 2018. And for those with longer holding periods, the company's backlog and manufacturing flexibility only add to its attractiveness going forward.