For the second time in as many weeks, Thor Industries (NYSE:THO) is winning upgrades on Wall Street.

Last week, we discussed how Thor's fourth-quarter earnings report and the sell-off it engendered prompted Aegis Capital to upgrade the stock, and Stifel to give Thor a new and improved price target. This morning a third firm weighed in on Thor's prospects, with analysts at Argus Research announcing that they, too, like Thor stock a lot. 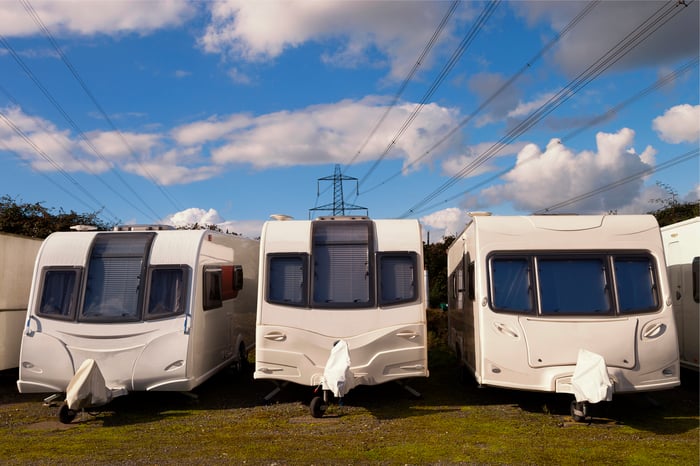 Thor turned in strong earnings last week, beating analyst estimates for both sales and earnings. Worries about potential increases in Thor's cost of production, however, from rising wages and "inflationary price increases" on certain raw materials, spooked investors into selling off Thor stock by 4% in after-hours trading following the results.

The next morning, Aegis and Stifel weighed in. Citing Thor's share price of just $120 and change -- down more than 20% from its recent highs north of $150 -- the analysts argued that Thor had great earnings growth prospects ahead of it, and deserved a higher stock price (and in the case of Aegis, a buy rating).

While these sentiments lifted Thor stock temporarily however, it didn't last. Shares closed at $120.74 yesterday, or almost the exact same price that won Thor an upgrade and a price-target hike eight days ago.

This is the point at which Argus swooped in. Upgrading Thor stock this morning, Argus says Thor once again offers investors an attractive entry point, and could zoom right back up to $143 a share. Why?

"Thor remains a leader in the RV industry based on its product range and strength in both the towable and motorized categories," argues Argus in a report covered on StreetInsider.com (requires subscription). The company is focusing on the sale of "lower-cost RVs" to "younger buyers." Thor likely be the first RV brand these buyers encounter (potentially translating into sales of upgraded RVs in years to come). It's also selling more RVs, and benefiting from economies of scale in its production as a result.

Indeed, in his earnings report this month, Thor CEO Bob Martin observed that Thor had just "achieved our third highest sales level of any quarter in the Company's history."

What about the profits?

Granted, profits didn't grow quite as fast as sales last quarter, which does put the "economies of scale" argument in question. Still, Thor's earning enough profit to make its valuation intriguing.

Granted, free cash flow (FCF) at the company isn't quite as strong as reported earnings as calculated under GAAP. Still, Thor generated healthy FCF of $296 million over the last 12 reported months -- just 67% of reported GAAP earnings of $439 million. But as Argus points out, that was enough cash to allow Thor to make a meaningful dent in its debt load, which Thor has cut nearly in half over the last couple of quarters.

Valued on free cash flow, Thor stock costs about 21 times FCF. When valued by this metric, and weighed against the consensus 15.5% growth rate, the stock's not as obvious a bargain as its 14.5 P/E ratio makes it appear. Then again, analysts such as Stifel suggest that Thor could surprise us and grow its earnings much faster than the other analysts project.

Last week, Stifel posited $11.80 in per-share earnings for Thor in 2019 -- 7% ahead of consensus. If Thor delivers on that, and continues growing faster than most analysts project, then even when valued on free cash flow its stock could be cheap -- and Argus could be right to upgrade it.

Thor Industries Stock Upgraded (Again): What You Need to Know @themotleyfool #stocks $THO Next Article
Current