The RV maker is plugged into a strong growth trend, and is seizing its opportunity.

Bringing the thunder to its top- and bottom-line results again, recreational vehicle (RV) manufacturer Thor Industries (THO 0.70%) saw a nearly 8% same-day rise in its share price after reporting its fiscal fourth quarter (Q4) and full-year 2021 results on Sept. 28.

Its results were popular enough with investors to pull fellow RV maker Winnebago Industries (WGO -0.20%) 6.4% upward along with it despite an overall market slump. Wall Street's optimism about Thor is likely justified, with at least three factors showing it may be undervalued and can look forward to a continued bull run for some time to come.

The company clearly notes that fiscal year 2020's metrics were unnaturally depressed, since the year included the full effect of COVID-19 and the resultant government business closures and lockdowns, but most of the rebound occurred in fiscal 2021.

During fiscal 2020, Thor had to shut down the majority of its factories for between six and eight weeks, cutting into its performance. However, customer demand grew strongly as well, as is shown by both revenue and earnings setting all-time records, reaching their highest ever in the company's 41-year history (and beating the previous all-time record set in 2018). 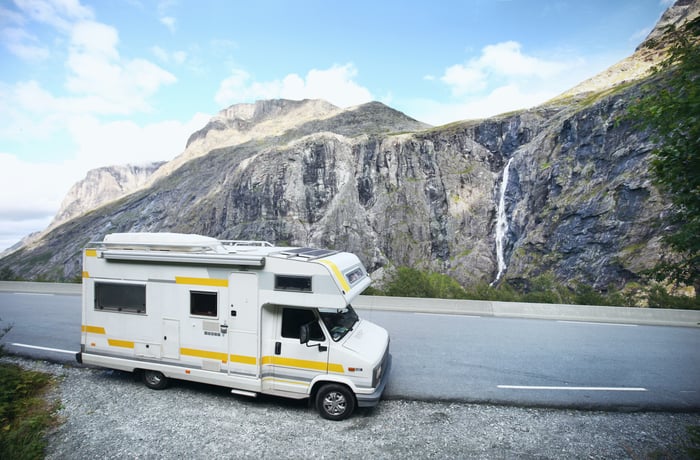 Investors may want to particularly note that Thor's full-year $12.3 billion in revenue is more than double its current $6.08 billion market capitalization (market cap). The company's price-to-sales ratio is approximately 0.49, indicating very roughly that investors are paying $0.49 for each $1 in sales the company generates.

Using a slightly more sophisticated ratio, the enterprise value to sales ratio (EV/sales), Thor's $7.52 billion enterprise value gives it a ratio of 0.61, meaning investors are paying $0.61 per dollar of sales.

While these are fairly basic metrics, when combined with Thor's strong earnings growth and other positive trends, they may show the company is currently undervalued, with plenty of space on the share price upside.

2. Thor has a huge order backlog

Looking to the future, people are currently buying Thor Industries RVs faster than the company can manufacture them. Because of this, Thor now has an order backlog of $16.86 billion, as of fiscal 2021's end on July 31. This is 190% more than the order backlog it had when fiscal year 2020 ended.

CEO Bob Martin said the "record backlogs" are "supported by North American dealer inventory levels that are 9% lower than the already historically low levels from a year ago and 44% lower than they were two years ago." This once again points to longer-term organic sales growth, and not simply a statistical anomaly caused by the rebound from COVID-19.

The backlog is also a positive for Thor because it ensures a continued robust stream of revenue moving forward into the new fiscal, and then calendar, year as Thor fills orders placed previously. While some of the orders may get canceled, most will likely be filled, and sales are growing in any case, giving the company plenty of current and future profit.

3. Present and future indicators are outstanding

Americans' thirst for the "sun and fun" -- and sense of freedom -- of the great outdoors isn't abating yet, according to both Thor and the RV Industry Association, or RVIA. Though the RV trend started a year ago during the COVID-19 lockdowns, the latest data shows continued strength. August shipments skyrocketed 33.5% year over year to 52,819, the best August for the industry to date.

In the Q&A document accompanying its earnings report, Thor Industries confirms "there are a number of favorable trends that support the continued near- and long-term growth of the RV industry." First-time campers increased 21% in 2020, while Thor points out millennial interest in camping is soaring, with 34% of new RV registrations now coming from this generation.

It also cites surveys showing 23% of campers work remotely, an aid to long-term interest in camping since the lifestyle will be less disruptive to work and earning. Recreational vehicle sales are projected to climb even higher in 2022. The RVIA reports ITR Economics research forecasting a new all-time record of 600,100 RVs sold in 2022. This is just 4% above 2021's projected total unit shipments of 577,200 RVs, unlike the 34% year-over-year jump from 2020. Nevertheless, total units sold could achieve 614,100 units by ITR's estimates. RVIA CEO Craig Kirby summed up the situation by saying "the record-breaking streak will continue."

Even if the more conservative figure proves true, Thor is operating in a market likely to continue growing at least through 2022. Its gains show it's executing successfully on its business objectives, and its backlog represents revenue just waiting to be harvested.

Its new aftermarket and OEM parts acquisition gives it another angle from which to profit off the RV craze, and as a potentially underpriced company relative to its performance, Thor Industries looks like a successful, bullish member of the industrial stocks sector.