Please ensure Javascript is enabled for purposes of website accessibility
Log In Help Join The Motley Fool
Free Article Join Over 1 Million Premium Members And Get More In-Depth Stock Guidance and Research
By Daniel Miller – Apr 6, 2018 at 10:03AM

Tesla has faced no shortages of challenges in the notoriously tough automotive business. Will it pull through again?

As we've all experienced at one point in life or another, when it rains it pours. That's surely how Tesla (TSLA -5.22%) investors feel after a month that included a fatal crash involving a Model X, a credit downgrade, production concerns, and even a Model S recall.

Just how bad has the past month been for Tesla, and how is the company responding?

Earlier this week the U.S. National Transportation Safety Board announced it would open an investigation into the fatal car crash involving a Tesla Model X on March 23. It's unclear whether the automated control system, dubbed Autopilot, was active at the time of the crash. Tesla's crash, coupled with a recent tragic incident of a self-driving Uber killing a pedestrian in Arizona, brought attention to the development and regulation facing driverless-vehicle technology. Tesla has been very vocal about its ambition to become a leader in developing level 5 autonomous vehicles, so it's understandable that these tragic accidents have made investors cautious about how quickly and safely the company, and others developing similar technology, can proceed.

And that was merely one of the challenges facing the electric-vehicle maker recently. Tesla's credit rating was downgraded by Moody's Investors Service on Tuesday; as reasons for the downgrade, Moody's cited cash burn, failure to meet production expectations, and a likely need to raise more capital -- potentially more than $2 billion. The credit-rating service cut Tesla's overall rating to B3, which is six levels below investment-grade; the $1.8 billion of senior unsecured notes that the company issued in August were downgraded from B3 to Caa1 -- seven steps into junk territory.

"Why would anybody buy the bonds? There is just no reason to buy the bonds," said Hitin Anand, senior analyst at CreditSights, according to Automotive News. "You're taking up equity-like risk and all you're getting is a 5.3 percent coupon."

But wait, there was even more bad news. Tesla recalled (voluntarily, for what that's worth) 123,000 Model S sedans built before April 2016, to replace bolts in the power steering component after salt in cold-weather areas caused corrosion. Tesla reported that there were no accidents or injuries, and said that if the bolts were to fail drivers would still be able to steer the car -- it would only require more force. The issue might not have made many headlines under normal circumstances, but it was easy to pile onto after a number of other negative issues, and it caused some investors to question the automaker.

"Tesla is testing our patience," said Gene Munster, a historically bullish managing partner at the venture capital firm Loup Ventures, according to Automotive News. "When we heard the recall news tonight we asked ourselves, do we still believe in the story?" 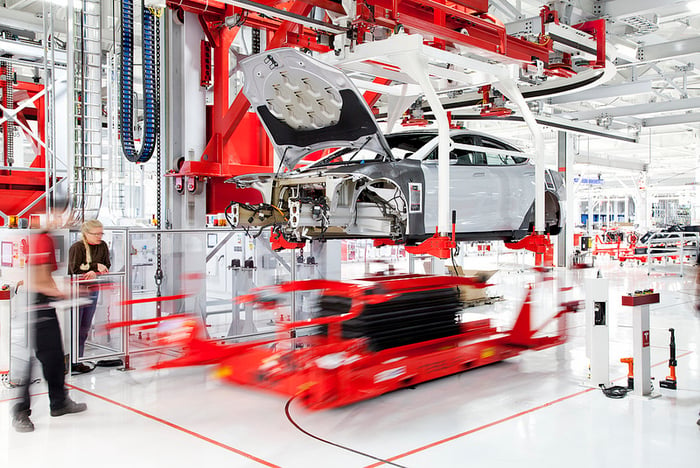 After a terrible, horrible, no good few weeks for Tesla and its investors, pressure is mounting for the company to produce an increasing number of Model 3s. Tuesday Tesla announced it built 2,020 Model 3 sedans in the last seven days of March, and would produce roughly the same number next week, with production figures to jump during the second quarter.

Tesla CEO Elon Musk recently said he was back to sleeping in the factory, and management has challenged production teams to meet goals and prove doubters wrong. But it's going to be an uphill battle if the automaker is to double production in the next three months, to 5,000 cars a week. It's "production hell."

On the other hand, Tesla is a talented company with a chip on its shoulder, and shareholders recently gave Musk billions of reasons to find solutions to the company's "hell." So it will be wildly interesting to see how Tesla responds to these challenges over the next three to six months -- stay tuned.