Does Uber's self-driving system work well enough to be on a public road?

That's one of many questions that are piling up in the wake of a fatality in Tempe, Arizona. A self-driving test vehicle owned and operated by Uber Technologies struck and killed a pedestrian in Tempe on Sunday night.

It's an important question with big implications that go far beyond Uber itself. Here's what we know.

Initially, it wasn't clear what happened in the incident. Did the pedestrian, Elaine Herzberg, suddenly dart in front of the car? But a segment of in-car video (which, as it ends just before the collision, some viewers may find disturbing) released by the Tempe police answered that question (she didn't) -- and raised a whole lot more.

There's a lot to consider there, but let's stick with the last point for the moment.

Most prototype self-driving vehicles, including Uber's, use radar and lidar sensors to detect objects (or pedestrians) beyond their cameras' vision. In this case, those sensors absolutely should have detected Herzberg -- before the moment when she became visible in the video.

But they didn't. That's a big deal: This was exactly the kind of accident that self-driving cars are supposed to be able to avoid. In fact, there are vehicles on the market today with advanced driver-assist systems that fall well short of self-driving, but that would have detected Herzberg crossing the street and applied the brakes approriately.

So back to that question: Does Uber's prototype self-driving system work? And a related question: If it doesn't, what is it doing on public roads? 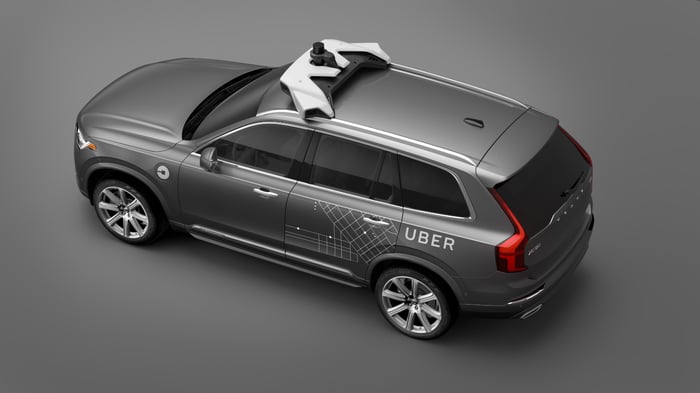 An Uber Technologies self-driving test vehicle like the one that hit a pedestrian in Arizona on Sunday night. Image source: Volvo Cars.

Is Uber testing a system that isn't ready for testing?

Might Uber be rushing the development of its system?

Consider: General Motors (NYSE:GM) and Alphabet (NASDAQ:GOOG) (NASDAQ:GOOGL) subsidiary Waymo appear to be putting the finishing touches on their own self-driving systems. GM's CEO, Mary Barra, has said that GM expects to begin deploying self-driving vehicles in ride-hailing service in urban areas on a large scale next year. Waymo has already received permission to operate a self-driving ride-hailing business in Arizona. It hasn't started yet, but its plans are clear.

Both efforts increase the pressure on Uber to deploy its own system. Remember, Uber isn't doing this for safety reasons. Uber is the largest ride-hailing company in the U.S., and one of the largest in the world, but it's not profitable. It appears that it won't be profitable until it takes human drivers out of its cars -- until they're self-driving, in other words.

Translation: Uber is facing heavy pressure -- uniquely heavy, perhaps -- to deploy a functional self-driving system as soon as possible. That pressure is likely coming first and foremost from its investors, who will want to turn Uber's huge on-paper valuation into real money at some point -- and who might see that valuation sink sharply if Waymo and/or GM succeed at becoming much-lower-cost competitors to Uber.

Has that pressure led Uber to cut corners on its system?

If Uber did cut corners, this will be bad

We won't really know the answer to that question until the investigations around the accident are complete. But if it turns out that Uber did cut corners, it's safe to expect a regulatory crackdown on the practice of testing self-driving prototypes on public roads -- and possibly larger restrictions on the deployment of the technology as well.

If that happens, investors who have bet on GM or Waymo to emerge as a self-driving leader -- or on key suppliers in the emerging autonomous-vehicle supply chain, such as NVIDIA or Aptiv -- will have to reset their expectations.

It may turn out that self-driving cars are further off than we thought before Sunday night.