Wells Fargo (NYSE:WFC) customers who live in Indiana, Michigan, and Ohio will soon see a new logo on their monthly statements. The bank decided to cut and run from retail branch banking in these three states in an effort to cull lower-performing branches from its network.

In a win-win deal, deposit-starved Flagstar Bancorp (NYSE:FBC) will take Wells Fargo's underperforming branches off of its hands -- and pay a premium to do it.

Gutting from the middle 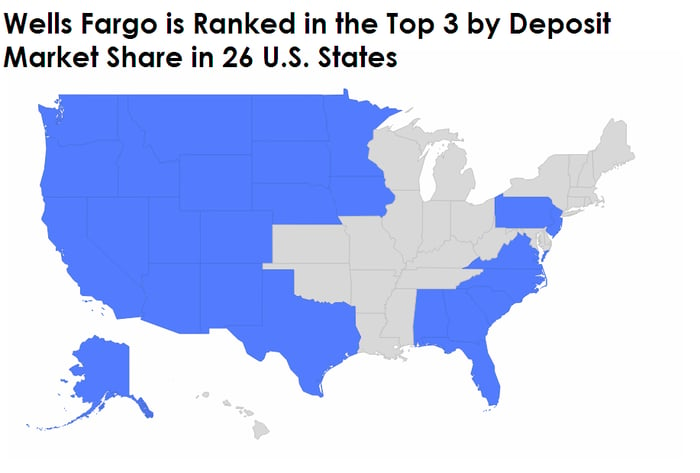 When Wells Fargo agreed to acquire Wachovia in 2008, it paired a massive West Coast branch network with a massive East Coast network. But the states that sat in between were largely lost in the middle, and even today, Wells Fargo hasn't really penetrated Indiana, Michigan, and Ohio the same way it has states on the coasts.

Wells Fargo isn't losing much by shedding a handful of Midwestern branches. The 52 branches the bank is selling had just $2.3 billion in deposits, or about $44 million of deposits per branch. That compares poorly to the average U.S. bank branch, which had $63 million in deposits, according to the Bank Administration Institute.

Put another way, these branches collectively made up about 1% of Wells Fargo's branch network but generated less than 0.2% of its deposits. The branches are a big expense with little benefit.

But one bank's liability can be another's asset. Flagstar Bancorp desperately needs deposits to help fund its loan portfolio. At the end of the last quarter, Flagstar had $13 billion in net loans but only $10 billion in deposits.

By acquiring $2.3 billion of deposits from Wells Fargo, Flagstar can replace high-cost funding with low-cost deposits while taking on some incremental operating expenses. It expects the transaction will be "modestly accretive" to its earnings per share in 2019, presumably because what it saves in interest expense will exceed what it pays to keep the branches open and operating.

Getting paid to eliminate expenses

In the low interest rate environment following the financial crisis, the ability to source deposits meant very little. But as interest rates rise from historic lows, banks that are hungry for low-cost liabilities are willing to pay a premium to buy deposits from banks eager to shed them.

Flagstar Bank said it would pay an effective deposit premium of 7% to acquire the branches from Wells Fargo, which implies it will pay about $161 million for the branches. In effect, Wells Fargo is getting rid of some of its least productive branches, and getting paid to do it. Flagstar is getting deposits it needs at a relatively low cost. Everyone wins.