Please ensure Javascript is enabled for purposes of website accessibility
Free Article Join Over 1 Million Premium Members And Get More In-Depth Stock Guidance and Research
By John Maxfield - Nov 5, 2017 at 8:18AM

No other megabank has grown faster.

Wells Fargo ( WFC -2.81% ) has gotten into its fair share of trouble of late, but that doesn't change the progress the California-based bank has made over the past decade at growing market share.

There are few charts that illustrate this better than one that tracks the growth of the four biggest banks in the United States, all of which sport balance sheets with assets in excess of $1 trillion. 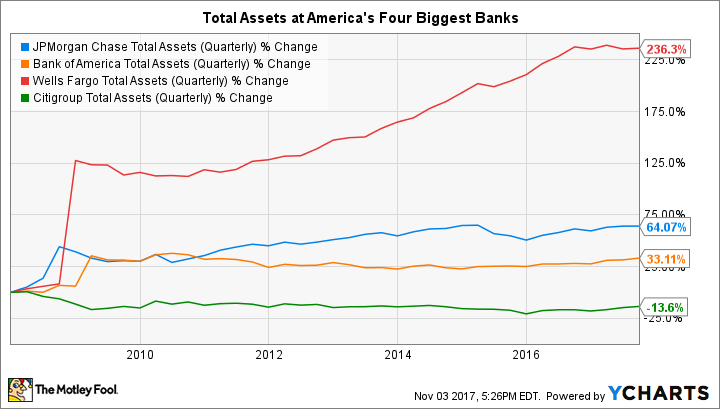 No other megabank comes close to matching Wells Fargo's growth rate since the beginning of 2008 -- i.e., the eve of the financial crisis. Wells Fargo's balance sheet has since grown by 236%, according to YCharts.com.

At the end of 2007, Wells Fargo's balance sheet weighed in at $575 billion in assets. Fast forward to today and that has increased to $1.9 trillion.

Much of Wells Fargo's growth since the onset of the crisis came in one fell swoop, by way of Wells Fargo's 2008 acquisition of Wachovia. The deal singlehandedly more than doubled the size of Wells Fargo's balance sheet. It also gave the bank a branch network that spanned the entire continent, as opposed to operating principally throughout the western United States before that. 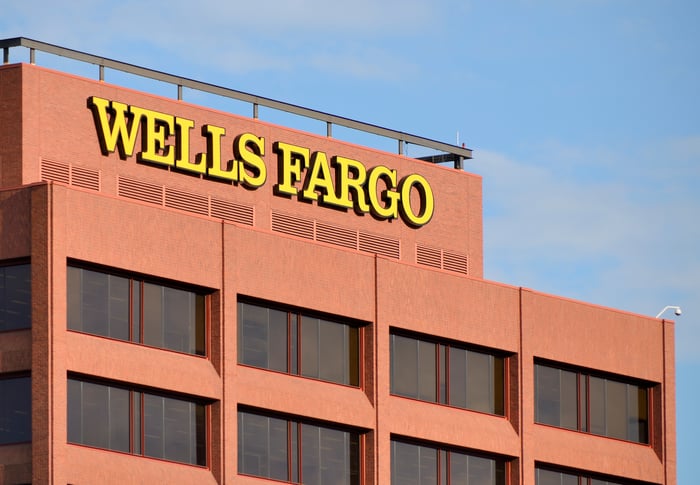 The most stark contrast to Wells Fargo's ascent is Citigroup ( C -2.06% ), which, not coincidentally, was also trying to buy Wachovia at the same time as Wells Fargo. As the preceding chart makes clear, Citigroup is the only multitrillion-dollar megabank to contract in size over the past decade.

Going into the crisis, Citigroup was the biggest bank in the country. But its troubles through the downturn, combined with the fact that it was the only one of the four not to consummate a major acquisition in the crisis, caused it to drop to fourth place, surpassed most recently by none other than Wells Fargo.

JPMorgan Chase's growth over the past 10 years can be traced to organic growth, as well as its acquisitions of Bear Stearns and Washington Mutual in 2008. Bank of America, meanwhile, bought Merrill Lynch the same year.

The net result is that, while Wells Fargo, JPMorgan Chase, and Bank of America have all seen their balance sheets expand since the crisis -- though, Citigroup's has gone in the other direction -- none comes close to Wells Fargo in terms of the magnitude of growth.