Please ensure Javascript is enabled for purposes of website accessibility
Log In Help Join The Motley Fool
Free Article Join Over 1 Million Premium Members And Get More In-Depth Stock Guidance and Research
By John Maxfield - Jan 20, 2016 at 10:22AM

It was only a matter of time. Wells Fargo (WFC 5.78%) has passed Citigroup (C 7.24%) to become the nation's third biggest bank by assets. It's a remarkable accomplishment when you consider that Wells Fargo entered the financial crisis as a regional bank while Citigroup barreled into it as the largest financial institution in America.

The realignment vindicates Wells Fargo's simple, prudent, and efficient approach to banking. It earned $5.7 billion in the fourth quarter. JPMorgan Chase (JPM 7.36%), the nation's biggest bank by assets, earned $5.4 billion over the same stretch. That's $300 million less than Wells Fargo even though JPMorgan Chase is 31% bigger than its counterpart on the West Coast. 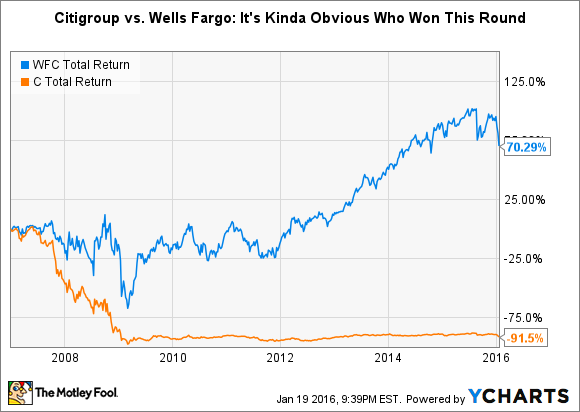