When footwear company Skechers (NYSE:SKX) reports its second-quarter results after the market closes on Thursday, the specter of its first-quarter report will be hanging over the stock. While Skechers reported stronger-than-expected revenue last time around, its guidance sent the stock tumbling more than 26% the next day.

Skechers' second-quarter guidance calls for revenue between $1.120 billion and $1.145 billion, which represents year-over-year growth between 9.2% and 11.6%. In the past four quarters, the slowest revenue growth rate Skechers reported was 16.7%. 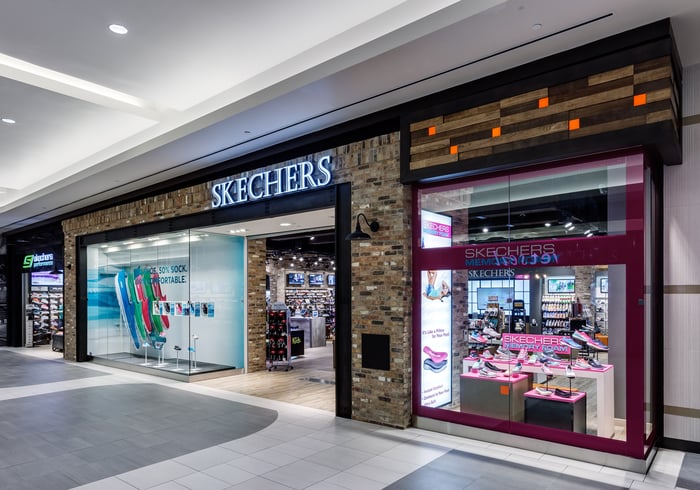 Analysts see revenue coming in near the middle of that range. The average analyst estimate calls for second-quarter revenue of $1.13 billion, a 10.1% year-over-year increase. The slowdown is partly due to the timing of certain shipments. Skechers expects some shipments to key international and domestic customers to be pushed into the second half of the year.

Management made clear during the first-quarter conference call that the weak guidance isn't an indication of soft demand. COO David Weinberg said: "[I]f you put that all together, we end up with a strong Q1, a modest Q2, and a very strong Q3 which is what we are anticipating at this time."

Guidance will need to be strong

With Skechers' management explaining away the weak second-quarter guidance, the company is going to need to impress with its guidance for the third quarter. Analysts are expecting about 15% year-over-year revenue growth on average right now, but that would still represent sluggish growth compared to recent quarters. To get the stock moving, Skechers is likely going to need to surpass analyst expectations.

The international business will be the driver of much of this growth. International wholesale revenue surged 17.9% in the first quarter, much faster than an 8.5% increase for the domestic wholesale business. Retail sales have also been booming, with first-quarter comparable-store sales up 9.5%. If Skechers' third-quarter guidance implies similar or better numbers, it would go a long way in quelling the concerns of worried investors.

Escalating trade tensions between the U.S. and China could throw a wrench in Skechers' plans. China is an important market for the company, and most of Skechers' products are manufactured in China and Vietnam. With the U.S. levying tariffs on certain Chinese goods and threatening to greatly expand the list of affected products, and with China likely to retaliate, Skechers could get caught in the crossfire.

I would expect Skechers' management to talk about the risks to the company during the second-quarter conference call. Growth in the second half could be stunted if the worst-case scenario plays out.

Trading for around $32 per share, Skechers' valuation reflects a pessimism that seems overdone to me. Backing out the net cash on the balance sheet, Skechers stock trades for roughly 13 times the average analyst estimate for full-year earnings. That's a steep discount to the market despite a history of double-digit sales growth.

Even if a trade war knocks down sales later this year, Skechers' balance sheet is strong enough to allow the company to weather just about any storm. Net cash totaled about $615 million at the end of the first quarter. That cash also gives Skechers firepower to buy back its own shares, which is exactly what it should be doing when its shares are trading at beaten-down prices.

Shares of Skechers have been slowly rising since its big drop in April, but they remain far below the pre-earnings peak. Solid third-quarter guidance combined with a depressed valuation could be just the fuel the stock needs to make up lost ground.