The market did not like the footwear company's guidance. But the post-earnings drop looks like a gift for value investors.

If you're a Skechers (SKX 5.21%) investor, the footwear company's first-quarter report last week probably didn't make you happy. While Skechers produced solid revenue and earnings growth, edging out analyst estimates for the top line, the company's guidance landed with a thud. The stock tumbled more than 26% the next day, wiping out most of its recent gains.

Not what investors were looking for

Skechers guidance wasn't so bad on an absolute basis. The company still expects year-over-year revenue growth between 9.2% and 11.6% during the second quarter, with earnings per share expected to be flat to up 13.2%. That sounds alright until you look at the company's first-quarter results. Revenue grew by 16.5%, with EPS rising 25%. The expected slowdown, especially for the bottom line, is what's troubling investors. 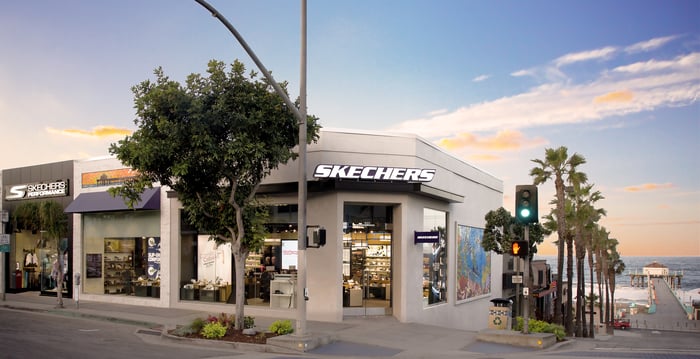 I don't know if this is a temporary issue, or if the guidance foreshadows longer-term problems. Skechers said that some shipments are expected to be pushed into the second half of the year, necessitating its weak second-quarter guidance. That's either an explanation or an excuse, and we won't know which until later this year.

There's uncertainty surrounding Skechers, and there may be a period of sluggish growth in Skechers future. As a Skechers investor, I'm OK with that, because the stock is priced more like a value stock than a growth stock, especially after the post-earnings plunge. The company doesn't need to hit a home run every quarter to be a solid long-term investment.

One thing that initially drew me to Skechers was the company's rock-solid balance sheet. At the end of the first quarter, the company had $700 million of cash and a little under $85 million of debt. That's good for a net cash position of about $615 million, or roughly $3.90 per share.

If you back that out of the current stock price, the market is valuing Skechers' business at about $25.60 per share. Based on 2017 results, Skechers stock trades at a cash-adjusted P/E ratio of 14.4. Based on the average analyst estimate for 2018, the cash-adjusted forward P/E ratio is just 11.2. Those estimates may come down in the wake of Skechers' first-quarter report, so the forward P/E ratio is probably a bit lower than it should be. But either way, Skechers is trading for a low-teens multiple of earnings.

Given that Skechers still expects to grow revenue at a double-digit rate in the second quarter, I don't think such a low valuation is justified. The S&P 500 is trading for around 24 times trailing-12-month earnings. Skechers is trading at a substantial discount to the broader market.

I bought all my shares of Skechers toward the end of 2016 for around $21 per share on average. The stock's price is much higher today, even after the post-earnings drop, but I think it's cheap enough to add to my position. After the trading restriction period following the publication of this article, I plan to buy some more shares of this beaten-down stock.

I think buying Skechers stock today will work out well in the long run, but there are some risks. Skechers problems may be deeper than the company is letting on, which could lead to a continued deterioration of its results. The potential for more tariffs or a full-scale trade war could also be a major problem. Skechers' main growth engine is its international business, and its manufacturing partners are based outside the United States, primarily in China and Vietnam. Higher costs and slumping international demand could wreak havoc on Skechers' business.

Despite these risks, investors looking for a growth story that's not trading like a growth story should seriously consider Skechers. It's a combination of growth and value that's tough to find in today's expensive market.