Please ensure Javascript is enabled for purposes of website accessibility
Log In Help Join The Motley Fool
Free Article Join Over 1 Million Premium Members And Get More In-Depth Stock Guidance and Research
By Rick Munarriz – Apr 20, 2018 at 9:18AM

The leading walking-footwear specialist moves lower after putting forward a bland guidance and not barreling past guidance the way it did three months earlier.

Shares of Skechers (SKX -6.98%) are sliding on Friday after posting poorly received first-quarter results. The walking and casual athletic-footwear specialist posted record net sales of $1.25 billion, but between decelerating revenue growth during the seasonally potent quarter, failing to blow past its guidance the way it did last time out, and offering up uninspiring guidance it just wasn't enough for the stock to justify the multiyear high it hit earlier in the week.

Skechers traded as high as $43.08 on Tuesday, its highest level since late 2015. Investors hoping for a repeat performance of its bar-raising fourth quarter three months ago were left hungry for more. Slowing growth can be a deal breaker sometimes. 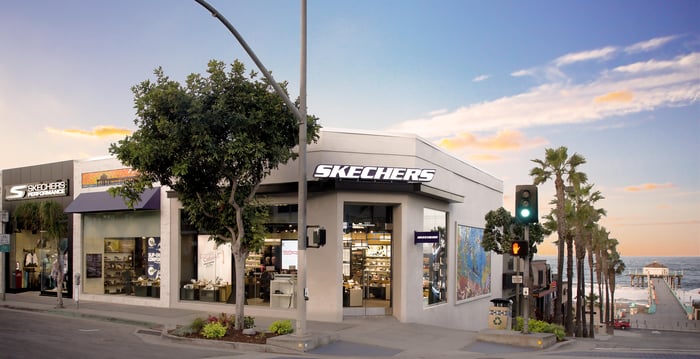 Running out of gas

Sales for the first quarter rose 16.5% to hit $1.25 billion, scoring reasonable growth across all three of its market segments. Domestic and international wholesale sales rose 8.5% and 17.9%, respectively. Retail sales rose 26.4% at its company-owned stores, a combination of a brisk expansion and a 9.5% spike in comps worldwide. Once again, we're seeing international sales growing faster than business closer to home.

The bottom line grew even faster, as gross, operating, and net margin all expanded since the prior-year period. Net earnings rose 25.2% to $117.7 million or $0.75 a share. Guidance back in January was calling for earnings per share of $0.70 to $0.75 on $1.175 billion to $1.2 billion in sales. Skechers landed at the high end of its profit range and just ahead of its sales goal, but it landed considerably ahead of both marks last time out. This time around, it proved merely mortal, but then we get to its guidance.

The company is targeting earnings per share of $0.38 to $0.43 on $1.12 billion to $1.145 billion in sales for the current quarter. The sequential slide on both ends of the income statement isn't a big deal. There's seasonality to footwear sales. However, the outlook translates into 8% to 11% top-line growth from the $1.029 million it rang up in sales a year earlier. Sales have rise by at least 16% in each of the four previous quarter. Skechers earned $0.38 a share a year earlier, so we're looking at projected earnings-per-share growth between flat to a gain of 13%.

Skechers isn't broken. It's still growing. However, with sales growth set to decelerate for the second straight quarter, it's worth noting that the last time we saw back-to-back periods of decelerating revenue growth at Sketchers, it was late 2015 -- just as the stock peaked last time out.