Skechers (SKX 1.27%) is hitting its stride again. The walking and casual athletic-footwear specialist posted record net sales of $970.6 million for its fiscal fourth quarter. The 27% year-over-year increase on the top line was fueled by double-digit percentage gains across all three of its businesses.

The performance is a far cry from the 12% to 15% that it was targeting in October.  Skechers has typically put up conservative guidance. This is the fifth report in a row in which it has landed ahead of the midpoint of its guidance, but this is the largest upward surprise. In terms of net sales growth, this is Skechers' biggest gain in nearly two years.

Margins improved to the point where Skechers' operating profit nearly doubled, to $55.7 million. Skechers reported a loss for the period, but that was the handiwork of a one-time tax hit related to the Tax Cuts and Jobs Act. On an adjusted basis, Skechers came through with a profit of $0.21 a share, well ahead of the $0.09 to $0.14 a share in earnings that it was forecasting four months ago. 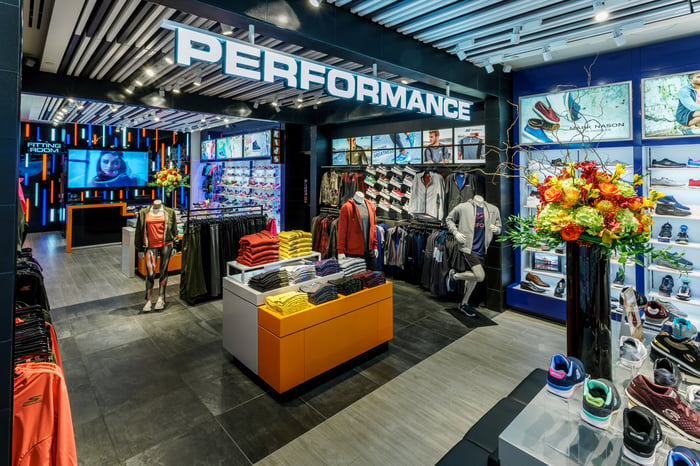 Skechers is thriving on all three fronts, something that wasn't the case just a few quarters ago. Its international wholesale business led the way with a 40.2% pop, combining with its rapidly expanding retail presence overseas to crank out 52.6% growth.

Skechers' outlook for the current quarter calls for a profit per share of $0.70 to $0.75 on $1.175 billion to $1.2 billion in sales. Don't read too much into the sequential surges on both ends of the income statement, as this is a seasonal business and it will be pitted against the first time it crossed north of $1 billion in quarterly sales. However, the guidance still calls for a 10% to 12% increase in net sales, with an even juicier 17% to 25% increase in per-share earnings.

Skechers stock hit a fresh 52-week high last week ahead of this week's earnings. Market volatility may be crashing the party, but there's no denying that -- after posting its strongest quarterly sales growth since early 2016 with strength across all three of its businesses -- Skechers' turnaround is taking place.