Las Vegas Sands Corp (NYSE:LVS) is by far the biggest cash machine in the gaming industry. In 2017 alone it generated $4.9 billion of EBITDA, a proxy for cash flow from resorts. Cash is coming in so fast that management can't pay dividends or buy the stock back fast enough, particularly now that there aren't any expansion plans on the table.

That's left Las Vegas Sands with a ballooning cash balance and very little leverage on the balance sheet. At a time when interest rates are low, it may be time to lever up the balance sheet and return billions in cash to shareholders. 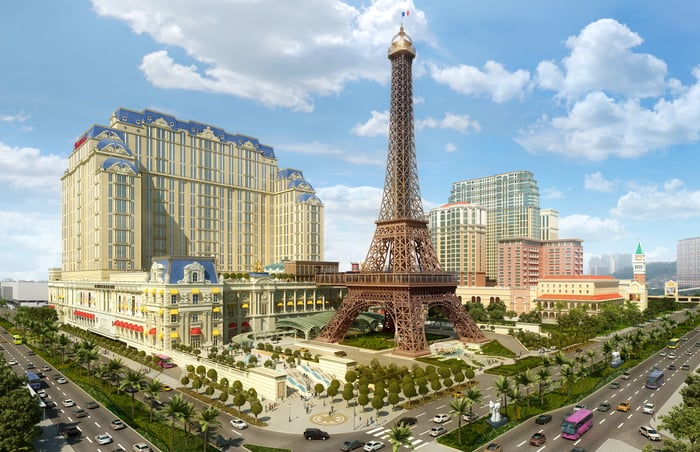 What happened to debt in gaming?

A decade ago debt was a huge problem in the gaming industry. Companies had taken on billions of dollars in debt to expand in Las Vegas and Macau, leaving them in dire straights when the recession hit.

Since then, there's been very little new construction on the Las Vegas Strip. That's allowed demand to catch up to supply, and Macau has grown so quickly that new resorts pay for themselves in just a few years. That's left balance sheets a lot stronger than they were ten years ago.

One way gaming companies like Las Vegas Sands have adjusted to their cash-flush condition is by paying a dividend to investors. Las Vegas Sands currently pays a $0.75 per share dividend each quarter, giving the stock a dividend yield of 4.6%. But the company could be giving a lot more back to shareholders, and that could boost the stock significantly.

At the end of the second quarter Las Vegas Sands had $7.1 billion in net debt on the balance sheet, compared to $5.3 billion of EBITDA generated in the past year. That's a net debt to EBITDA ratio of just 1.3 times, which is extremely low for a gaming company.

Las Vegas Sands doesn't have any major expansions planned, so management could be returning nearly all of the $5.3 billion of cash generated to shareholders; otherwise, they're probably de-levering the business. Given the 790 million shares outstanding and the $3 per share annual dividend, about $2.4 billion of cash is eaten up by the dividend on an ongoing basis. That could be nearly doubled and still leave the $500 million necessary for annual maintenance capital expenditures. Another option would be to buy back stock, which it did at a $100 million clip in the second quarter -- although that's barely enough to move the needle given the pace of cash generation.

Las Vegas Sands could also increase its leverage and comfortably pay the existing dividend. If it increased net debt to EBITDA from 1.3 times to 3.0 times it would free up $9.0 billion of cash, which could buy back 137 million shares of stock, 17% of all shares outstanding, or simply pay a dividend of $11.40 per share.

Some companies want to eliminate debt and hold cash on the balance sheet, but Las Vegas Sands shouldn't be one of those companies. It is ultimately a real estate developer and hotel operator with a casino business attached, and it would be crazy to run a real estate or hotel business without debt. At this rate, Las Vegas Sands could be debt-free in a few years.

I think Las Vegas Sands would do investors a lot of good by relevering the balance sheet, taking out more debt and either buying back shares or paying a large, special dividend. Given the low interest rates and strong cash flow, it's the prudent thing to do.