It's likely you spend at least 5% of your income eating out. Put these three stocks on your menu to start earning from America's love of restaurants.

Investors are often enamored with novel business models at the expense of simple-to-understand industries. Take restaurants, for example. Although the Bureau of Labor Statistics reported that the average household spends $3,000 per year at restaurants, a figure exceeding 5% of total household income, many investors continue to overlook the industry.

Simple doesn't mean easy, though. The restaurant industry is notoriously tough, with a constant stream of new entrants, fickle consumers, and constant cost pressure. Still, well-run restaurants deserve a place in your portfolio. To that end, we asked three Motley Fool contributors for three restaurants to watch. Read on to find out why Dunkin' Brands (DNKN), Starbucks (SBUX 3.87%), and Wingstop (WING 3.65%) are on the menu. 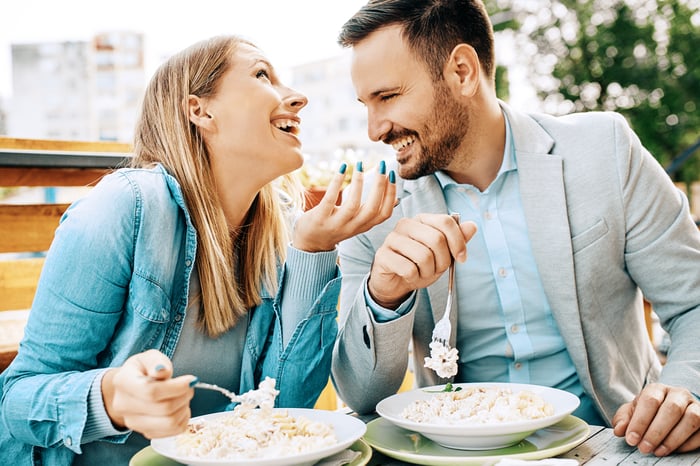 Demitri Kalogeropoulos (Dunkin' Brands): The holiday shopping season is always important to Dunkin' Brands' annual results. But this year investors have more reasons to watch the stock in the key November/December time period.

Over the holidays the chain will launch a major push into premium espresso-based coffee drinks that should test its ability to compete against more-established rivals like McDonald's and Starbucks. Dunkin's success with cold brew and frozen beverages during the summer months demonstrated that it can extend outside of the traditional drip coffee that the chain is known for, after all.

At the same time, Dunkin' continues to expand westward, away from its geographic home base, in a bid to blanket the U.S. Executives are hoping to roughly double its footprint, and the next few quarterly updates will tell investors a lot about the achievability of that target.

To transition into the global restaurant player it aims to become, Dunkin' will need to prove that it can deepen both its product offering and its geographic reach. We'll learn over the next few months just how well it is progressing with both of those initiatives. 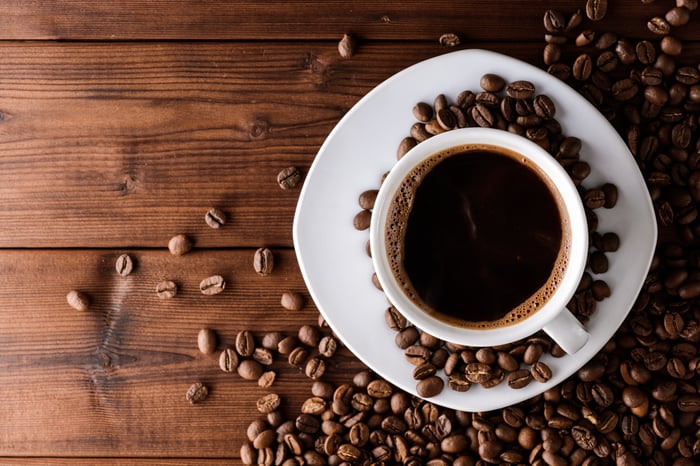 Time to ignore cup controversies and focus on growth

Jamal Carnette, CFA (Starbucks): It's been a disappointing run for the former high-flying stock. In fact, Starbucks has returned approximately 3% per year for the last three years versus the greater S&P 500 that has returned 10% during the same period. The financial media hasn't been too kind, either, choosing to focus on ginned-up and inane controversies about holiday cup colors and/or designs, rather than improvement.

During this period, Starbucks was investing heavily in both the United States and in Greater China to support its next leg of growth. Starbucks' recently announced fourth fiscal quarter shows that's what's occurring. Starbucks reported $6.3 billion in revenue -- a record haul -- on the back of 11% growth from last year's quarter.

While the United States appears to be firing on all cylinders with 4% comparable sales growth, China remains both a growth area and an opportunity. Although last-quarter comparable sales in China increased only 1%, total revenue increased 44% due to Starbucks opening 756 new stores and buying full control of 1,300 stores the company had owned prior as a joint venture. Operating income, a cleaner metric considering the JV consolidation, grew 15% over the prior quarter.

Starbucks stock is starting to turn the corner after years of underperformance, and it's time for investors to pay attention to this, not the color of its holiday cups.

How much higher will Wingstop fly?

Leo Sun (Wingstop): Shares of Wingstop surged more than 70% this year, fueled by a streak of impressive double-digit revenue and earnings growth that repeatedly topped analyst estimates. However, Wingstop's big rally boosted its forward P/E above 70, so it could be set for a pullback by the end of the year.

On the surface, Wingstop's growth looks solid. Its revenue rose 15.5% annually last quarter, its systemwide same-store sales grew 6.3%, and its net income jumped 33.8%. It increased its store count by 11.7% to 1,215 global locations, with the vast majority owned by franchisees. That low-overhead model, combined with low chicken-wing prices, significantly boosted Wingstop's margins over the past year.

Wingstop also doesn't face any direct competitors. Its closest rival is Buffalo Wild Wings, but Wingstop's stores are smaller, focus on takeout, don't serve as much alcohol, and aren't focused on sporting events. Wingstop is also making rapid progress in digital sales, which accounted for over a fourth of its sales last quarter, and is rolling out nationwide deliveries with DoorDash.

Analysts expect Wingstop's revenue and earnings to grow 44% and 18% this year, respectively, then decelerate to 14% revenue growth and 6% earnings growth next year. Those growth rates are decent for an expanding fast-food chain, but they don't really justify its premium valuations. Therefore, I'll be watching Wingstop this month to see if the stock pulls back to more reasonable levels, since it could still be a promising long-term investment.