The restaurant chain is finding success in new markets.

Dunkin' Brands Group (DNKN) believes that it can double the number of its Dunkin' restaurant locations in the U.S. in the coming years. Judging by its third-quarter results, it may be right.

The restaurant franchisor saw its profits boosted by a combination of successful new store openings and higher sales at existing locations -- both of which suggest that its westward expansion is progressing smoothly.

Franchisees opened 77 net new Dunkin' and Baskin-Robbins locations, bringing the company's global store count to 20,764 at the end of the third quarter. Of these new store openings, 52 were new Dunkin' restaurants in the U.S.

During a conference call with analysts, CEO David Hoffmann said that the company's new restaurants are generating strong early returns for franchisees.

"As we focus on expansion, we remain on track for 90% of our net development that comes from outside our core markets," Hoffmann said. "We are also encouraged to see cash-on cash-returns continue to be in the 20% to 25% range for the 2017 cohort of new restaurants opened in our top 10 development markets, all of which are outside of our core." 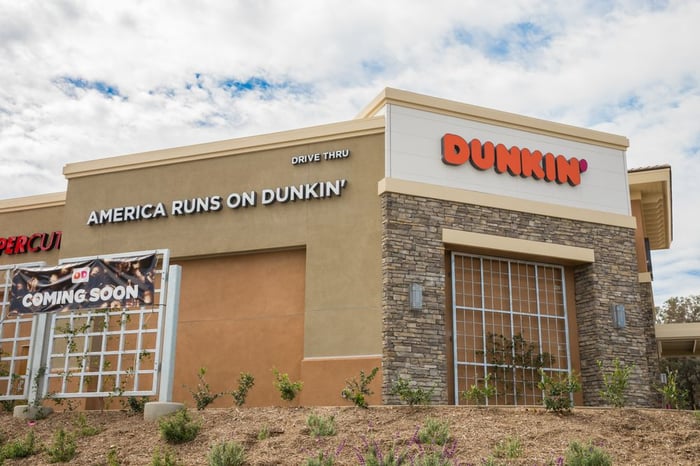 Still, Dunkin' Brands continues to struggle with declining traffic in the U.S. In response, the company has refocused its branding around coffee and away from donuts. It also plans to spend heavily to modernize its stores.

"Earlier this year we announced that we would be investing approximately $100 million into Dunkin' U.S., a substantial amount of which will be in equipment to support our multi-year plan to expand our beverage portfolio beyond traditional drip coffee, including new espresso equipment," CFO Kate Jaspon said. "We, along with our franchisees, who are significantly investing in this new program, are excited to introduce the new Dunkin' espresso to America in the fourth quarter."

All told, operating income increased 6% year over year to $111.6 million. Net income -- which was beneficially impacted by certain tax-related items and a lower effective tax rate resulting from tax reform -- jumped 60.5% to $66.1 million. And earnings per share (EPS), boosted by stock buybacks, soared 75.6% to $0.79.

"We are also pleased to have completed our previously announced $650 million accelerated share repurchase program during the third quarter, demonstrating our continued commitment to utilizing our strong balance sheet to return capital to shareholders," Jaspon said.

Hoffman summed up the company's strategy going forward as follows: "Quality food and beverages wrapped in compelling value and delivered at the speed of Dunkin' is our formula for success in our future."