Please ensure Javascript is enabled for purposes of website accessibility
Free Article Join Over 1 Million Premium Members And Get More In-Depth Stock Guidance and Research
By Rhian Hunt - Oct 26, 2020 at 11:50AM

The restaurant chain attracted a hefty bid from a major restaurant holding company.

Doughnut, coffee, and ice cream chain Dunkin' Brands Group ( DNKN ) might be on the verge of going private because of an acquisition offer by Inspire Brands, according to a company press release Sunday. While Dunkin' provided almost no information on the specifics in its news release, The New York Times' DealBook reports Inspire is offering $8.8 billion for the eatery company, an approximate 20% premium above Dunkin's Friday closing price.

The acquisition is clearly no light snack, and unsurprisingly, multiple analysts have already weighed in on the prospective transaction. Barron's reports Lauren Silberman at Credit Suisse says the buyout would be "the highest takeout multiple" in a decade. Mizuho Securities managing director Michael Dick said if the merger "comes to fruition, it would mark Inspire's largest, and one of the biggest deals in restaurant history." 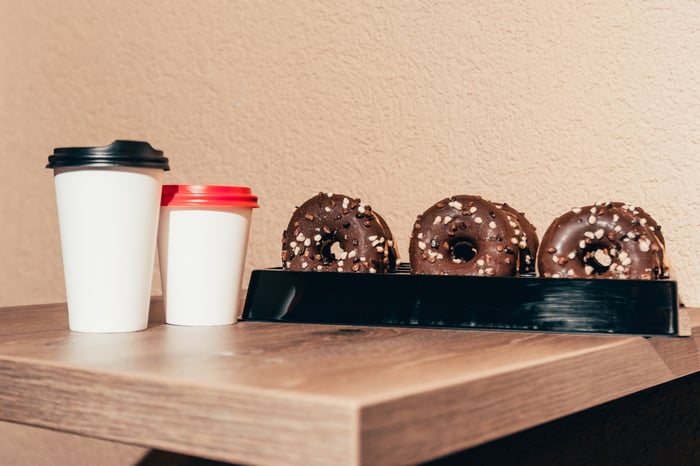 Many analysts say the premium Inspire is willing to pay is set so high no rival bidders will try to muscle in on the deal. A Cowen analyst highlights how the $106.50 per share purchase price is a 22.4-times multiple of the company's expected 2021 EV-to-EBITDA ratio, noting Inspire's previous acquisitions were considerably less pricey, according to Seeking Alpha. Inspire snapped up Buffalo Wild Wings for a 10-times multiple and Sonic Drive-In for a 15-times multiple.

However, KeyBanc Capital Markets posits Dunkin' might receive even higher bids from another potential purchaser.

Dunkin' Brands came through COVID-19 relatively unscathed and is vigorously pursuing expansion into promising markets outside its well-developed eastern U.S. core region. It is one of several restaurant chains that have bounced back fast from the pandemic.