This morning, the stock brokerage arm of megabanker Bank of America announced it is downgrading Best Buy shares to underperform (i.e., sell) on worries of a "deceleration" in the retail business. Investors are responding to the news pretty much as you'd expect, selling off Best Buy stock by more than 3%. But are they right to do so? Is Best Buy stock really bad enough that it deserves to be sold? 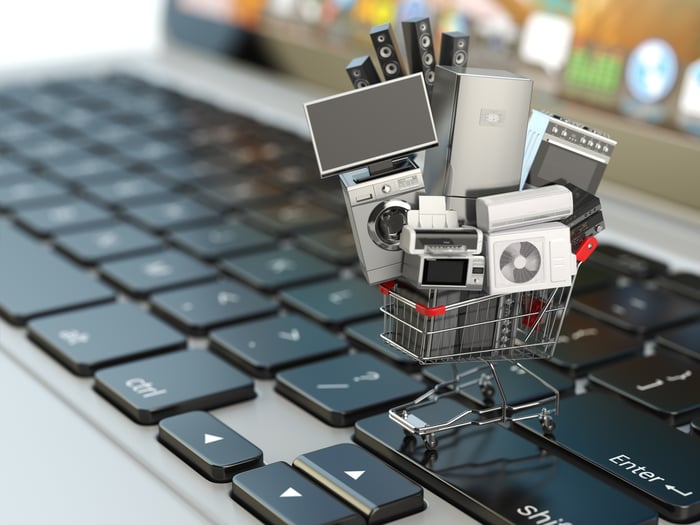 Best Buy's problems aren't necessarily the fault of Best Buy -- but that doesn't lessen their severity, warns Merrill Lynch in a downgrade reported today by TheFly.com. The analyst expresses "caution" on demand for everything from video games to television sets to iPhones and iPads, all of which are important sales drivers for an electronics retailer like Best Buy.

Granted, the company has been doing a good job of selling such products in the past. Its fiscal third-quarter financial report showed sales growing 2.9% year over year (with same store-sales up 4.3%), and diluted earnings per share up 26.9%. (Performance earlier in the year was nearly as strong, with profits up 25.4% over the past nine months.)

The downside of this, says Merrill Lynch, is that such past successes set Best Buy up for "tough comparisons" going forward. There's even the possibility Best Buy will post an "outright comp miss." The analyst worries that other analysts, meanwhile, are overoptimistic about Best Buy's chances of showing continued strength, and have assigned "too high" estimates for "2019/20 earnings" and are bound to be disappointed.

So Merrill Lynch is downgrading Best Buy to neutral and assigning a $50 price target.

Now about those estimates

Are analyst estimates too high? Perhaps -- but that's not exactly Best Buy's fault. According to data compiled by S&P Global Market Intelligence, the average analyst following Best Buy today forecasts the company will report $5.21 per share in pro forma profit this year (or $5.11, according to GAAP), and grow that about 6% to $5.50 in fiscal 2020 (or a GAAP profit of $5.47).

Those may not seem like very aggressive targets -- 6% or 7% earnings growth next year, depending on whether you're measuring pro forma or GAAP profit. They are, however, higher than what Best Buy itself is projecting. Last month, management took the opportunity to rein in expectations for its fiscal fourth-quarter and full-year profits, and said it thinks it will earn pro forma profits of only $5.09 to $5.19 per share this year.

All that being said, I still think that Merrill Lynch may be overreacting in downgrading Best Buy stock. First, because management has warned investors ahead of time of the possibility that it will miss analysts' estimates, and by now investors have to at least anticipate the possibility of such a downside "surprise." And second, even if Best Buy ends up earning less than Wall Street is forecasting, the stock still doesn't look very expensive to me.

Consider: Valued at $14.9 billion and with more cash in the bank than debt, Best Buy costs just 13.6 times trailing earnings. It's even cheaper when valued on free cash flow -- about 12.2 times FCF. It's cheaper yet when valued on its own pro forma earnings forecast -- about 10.5 times this year's projected pro forma profit.

Weighed against these valuations, Best Buy has an 8.5% projected long-term growth rate, and pays a 3.3% dividend yield -- thus an 11.8% projected total return. Valuations of 12.2 times FCF and 13.6 times earnings tell me that Best Buy stock is perhaps a little bit overpriced for its expected return, but not a whole lot, and certainly not so much that investors should feel compelled to sell Best Buy shares on Merrill Lynch's say-so.

On the other hand, if Best Buy does end up missing earnings next quarter (but hitting its own forecast), and sells off as Merrill Lynch is predicting, I might even be tempted to buy some shares myself.