But if you ask me, value stocks that pay dividends -- that's where the real money is, and these are the kinds of stocks you should be investing in.

* All data courtesy of finviz.com.

Today we're going to be focusing on these real market gems -- dividend-paying stocks that would be arguably cheap enough to buy even if they paid no dividend at all. Cheap stocks that, once you factor their big dividends into the calculation, become even cheaper.

What is a value stock? Opinions differ. Benjamin Graham, the "father of value investing," believed that every company had an "intrinsic value" and that, by buying below that value, an investor could create a "margin of safety," such that, if she miscalculated and paid too much, she would still be acquiring the stock for no more than it was intrinsically worth.

Value investor John Neff reduced this process to a simple mathematical formula: When the sum of a company's dividend yield plus its expected 5-year rate of growth in profits was greater than its price-to-earnings ratio, this resulted in a "total return ratio" of greater than 1.0 -- and a value-priced stock. (For the record, a "dividend yield" is simply the stock's annual dividend divided by its stock price. A "price-to-earnings ratio" or "P/E" is the stock's share price divided by its earnings per share over the past 12 months). Other investors gauge their values according to book value, enterprise value, and even more esoteric measurements.

But there's an even simpler approach. It seems safe to say that if you buy a stock that costs less than what most stocks sell for while growing at a rate faster than other stocks are expected to grow, chances are you're getting yourself at least a relative bargain. That, to me, is the definition of a value stock: one that offers a better "value" than most other stocks that are available to invest in.

According to data provided by Multpl.com and Morningstar, the average stock on the S&P 500 today sells for about 25 times trailing earnings and is growing those earnings at a rate of 12% or better. So if you're looking for a value stock, a good place to start is by screening for stocks that cost significantly less than 25 times earnings, while expected to grow at a rate significantly more than 12% annually over the next five years.

Each of the five stocks named above, and described below, meets these criteria.

The second half of the value-dividend paradigm is even easier to define: If a stock pays a dividend, it's a dividend stock. If it pays more than the average dividend on the S&P 500 -- the index listing the 500 largest companies traded on U.S. stock exchanges (that's a 2% dividend yield, by the way) -- then that's even better.

A word of caution is in order here. Thoroughly research a stock before you buy to make sure you don't fall victim to a yield trap. A yield trap is a stock that looks cheap and has a high yield but this is because there are fundamental problems with the company.

Four of the five stocks described below meet this criterion as well, making them arguably even cheaper than their P/E ratios suggest (because when you add the dividend yield to the P/E, you get a better total return ratio). The fifth -- our surprise stock on the list -- comes close. 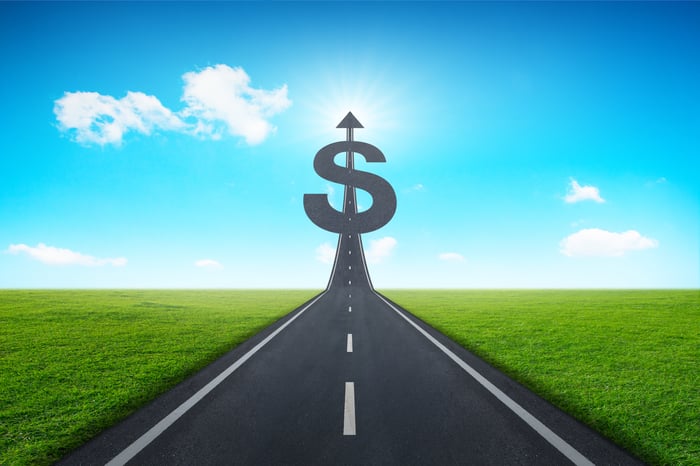 With prices this low, and dividends this big, these stocks have nowhere to go but up. Image source: Getty Images.

It's right there in the name. If you're looking for a good value dividend stock, then Best Buy basically screams for attention. One of the last few big box stores still standing after the Amazon onslaught against brick-and-mortar retail killed off the competition by selling more cheaply than physical stores could afford to. Best Buy today boasts a powerful network of some 1,500 retail stores selling a range of electronics and major home appliances -- and offering in-person, hands-on sales support that Amazon cannot yet match.

Often given up for dead or dismissed as a "showroom" where customers would examine goods before buying them on online, Best Buy has defied the naysayers, cutting costs and competing fiercely with Amazon on price, while also offering in-person advice and a Geek Squad of techies that Amazon is hard-pressed to match. Sales growth at stores open more than one year at the big box retailer soared 9% in Q4 2017, and profits are growing even quicker, with analysts who follow the stock telling S&P Global Market Intelligence they expect Best Buy to grow its profits at better than 15% annually over the next five years.

That's nearly three full percentage points better growth than the average S&P 500 stock is expected to achieve. Yet Best Buy stock costs less than 18 times earnings -- a 28% discount to the average P/E ratio on the S&P. To top it all off, Best Buy pays its shareholders a 2.5% dividend yield -- 20% better than the average dividend paid on the S&P. Also, its payout ratio -- the percentage of profits that go toward paying the dividend -- is a very affordable 42%, leaving room for Best Buy to grow its dividend over time.

That's bad news for Comcast customers, and a big reason Comcast often tops the list of companies Americans love to hate. But monopoly markets and pricing power can be great news for investors in those companies.

Comcast may seem to be everywhere in America already, but analysts still think Comcast is capable of growing its earnings at an above-market 17% annualized rate by expanding service and increasing prices. That's faster than you'd expect for a stock priced at less than 16 times earnings -- fast enough to give Comcast a PEG ratio (P/E divided by growth, and thus similar to the total return ratio mentioned above) of less than 1.0 (a common measuring stick for value investors). And with an entrenched business largely insulated from competition, Comcast has plenty of cash to fund its 2.3% dividend yield, as indicated in its payout ratio of only 13%, making it a great choice for value dividend stock investors.

Speaking of fast-growing stocks, have you taken a look at the housing industry lately? Nearly a decade after the housing bubble burst, America once again has more homebuyers than it has homes to buy, and homebuilders like M.D.C. Holdings are enjoying boom times.

Analysts forecast near-16% earnings growth rates for the company over the next five years, but because housing is still viewed as a "cyclical industry," where boom times are followed by busts,  investors have been hesitant to give M.D.C. full credit for that growth rate. The stock's P/E ratio remains a lowly 11.2, well below what its strong growth prospects suggest is appropriate.

At the same time, USA Today reports that "the housing market shows no signs of slowing" despite rising interest rates, and half the states in which M.D.C. operates -- California, Colorado, Florida, Nevada, and Utah -- are among the top 10 fastest growing housing markets in the U.S. With its prospects so secure, it's no wonder M.D.C. Holdings feels confident paying its investors a 4.1% dividend yield that's twice what the average S&P stock pays. (As with the other stocks named so far, MDC's dividend payout ratio is a very affordable 37%). The only wonder is that more investors haven't bought the stock (yet).

What's good for homebuilders, by the way, should be good for home improvement retailers -- and there's no store chain more closely associated with home improvement than Home Depot. The more people who buy new homes, after all, the more homeowners there are to patronize Home Depot to outfit their new domiciles with new appliances and fixtures, to build fences and decks, to repaint living rooms -- or to hire a contractor to do so -- and on and on and on.

At the same time, if demand for homes outpaces the rate at which homebuilders can build them -- causing house prices to climb out of reach -- Home Depot can still benefit. Folks priced out of the "move-up" market and forced to stick with their starter homes provide a base of customers motivated to remodel their existing homes to suit their changing needs. And still, other customers may patronize the retailer to spruce up homes they hope to sell. Home Depot has a loyal customer base of professionals which means they benefit from both sides of the equation. Long story short, the healthier the housing market, the better the news for Home Depot.

And the news here is good. Analysts who follow Home Depot see the company growing its earnings at an above-market 15% annual rate. While the stock is a bit more expensive than others on this list, at 23.6 times earnings it's still cheaper than most S&P 500 stocks (and arguably a better than average business as one half of the Lowes-Home Depot oligopoly, so worth the premium). On top of that, Home Depot boasts a 2.3% dividend yield that's 15% above the market average.

I admit it -- I'm putting Apple on this list primarily for shock value. Not a lot of investors would expect to find one of the most popular tech stocks on a list of dividend payers and bargain-priced stocks. And yet, here we find the maker of iPhones, iPads, and MacBook computers nonetheless.

And yet, when judged by its total return ratio (that's the P/E, divided by the sum of the growth rate and dividend yield), Apple does qualify as a value dividend stock. Although the company's 1.4% dividend yield is a bit lower than the average S&P 500 stock pays, it's actually pretty generous for a tech stock -- many of which don't pay dividends at all. Preferring to plow their profits back into growing their businesses, tech stocks are more often sought out for their high growth rates than for their fat dividend checks.  Add Apple's 1.4% dividend to Apple's 13.2% rate of expected earnings growth, though, and the total return expected from this stock is a healthy 14.4%.

Where Apple really shines, though, is on value. With more than $50.5 billion in GAAP net profit, the stock sells for a P/E ratio of only 17.4 -- nearly a 30% discount to the average P/E found on the S&P 500. When you divide this P/E by 14.4, your total return ratio is just 1.2, significantly cheaper than the total return ratio for the average S&P stock, which is closer to 2.0.

Why is Apple so cheap? It's probably a function of large numbers. With a market capitalization within spitting distance of $1 trillion, Apple is America's most valuable company already. This naturally raises questions about how much bigger Apple can get. And yet, S&P Global data confirm that despite its size, Apple's sales are continuing to grow in every major market in the world (except China, and that's only Apple's third biggest market), as are its profits. Apple's strategy of "locking in" customers to its ecosystem -- where iPhone sales beget purchases of apps at the App store and music and movies at iTunes -- keeps customers coming back year after year to spend big bucks to keep their iPhones up to date and buy the shiniest new iPads.

So long as that trend continues, I'm convinced the numbers are true: Between its price, its dividend, and its projected growth rate, Apple really is a bona fide value dividend stock.