2018 was a roller coaster of a year for massive industrial conglomerate 3M (NYSE:MMM). The company's fundamental performance has alternately impressed and disappointed in the three quarters reported so far. Overall during the year, though, the company's stock price dropped notably, on the back of some disheartening results and two cuts in guidance during the year, not to mention a choppy stock market.

In spite of its struggles with fundamentals, the company believes it has scope to grow its key results over the next few years. Although 3M is not particularly acquisitive, it ended 2018 by announcing a big-ticket purchase to help it achieve that aim. I like this asset buy and what it might represent for the company. Here's why. 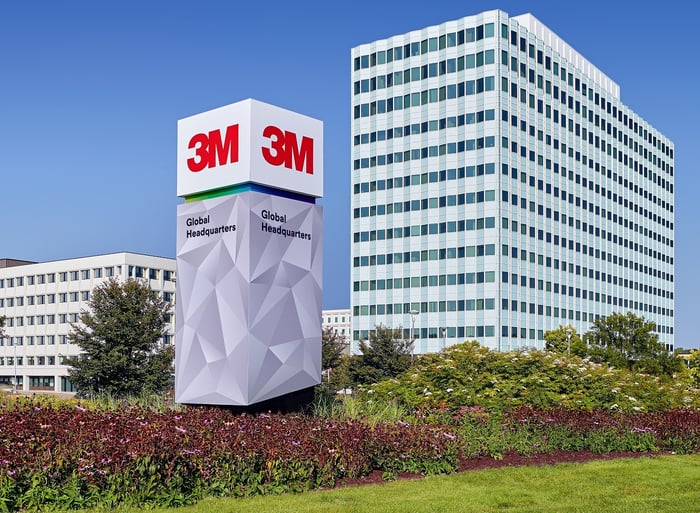 3M has struck a deal to buy the technology business of a privately held, early-stage healthcare documentation company called M*Modal for an enterprise value of $1.0 billion. The deal is expected to close in the first half of this year. 3M said the unit earns around $200 million in annual revenue, and it will be adjusted-earnings neutral to its new parent's results in the first year after the acquisition closes.

In 3M's five-year plan released recently, the company's healthcare segment had the best range for estimated organic local-currency annual sales growth among the company's current five business units, at 4% to 6% from 2019 to 2023. Here's how 3M sees sales improving among the quintet:

The company is smart to aim highest with healthcare and, consequently, to devote resources to improving sales in the segment via acquisition. General healthcare spending is set to skyrocket over the coming decades as the senior-citizen population in America is anticipated to double in the coming 35 years; the populace as a whole will require more medical attention.

Besides, the company has been a bit of a laggard in healthcare lately, so its efforts could use a revenue-generating asset or several. The healthcare business delivered organic local-currency sales growth of only 2.7%, 3.8%, and recorded a slight decline of 1.1%, respectively, in the first three quarters of fiscal 2018. The rock-bottom of the projected range in the previous five-year plan was 4%.

I'm not a believer in companies spending valuable capital to buy growth, rather than developing it organically, but as part of a broader effort, it can be a winning strategy. M*Modal is clearly a player in its segment, so the technology unit going over to 3M has a fine chance to make a meaningful contribution to its new parent's future.

Of course, any company as sprawling 3M is not going to juice growth with a single investment, even if said investment is $1 billion in size. But it's an encouraging sign that management is thinking in the right direction about how to solve its problems, and actively pouncing on an opportunity to buy its way toward a solution.

Combined with the 2018 stock price swoon, which was typical for the Big Industrials space, this puts the company into consideration for a buy to start the new year. Like other fallen diverse-industrial stars Honeywell (NASDAQ:HON) and Caterpillar (NYSE:CAT), to name but two, certain valuations now look intriguing for 3M:

3M beats Honeywell in terms of five-year forward PEG, although it's not a bargain when compared to Caterpillar. However, to me, this can be somewhat justified by 3M being more diversified in higher-potential segments than Caterpillar. I should also point out that 3M is the only Dividend Aristocrat among the trio, and therefore an inherently more reliable dividend play.

All of this, in my view, makes 3M stock worthy of consideration as an industrial-sector investment for these opening days of 2019.