Netflix (NASDAQ:NFLX) may be the top streaming giant in the world, with 140 million paying subscribers, but before it was an online content powerhouse, it was a simple DVD-by-mail rental service. And to some people -- it still is.

You might think Netflix would have phased out the DVD rental service over the 12 years since it launched its popular streaming service in 2007. However, Netflix has kept the DVD rental business going, and it's still profitable. 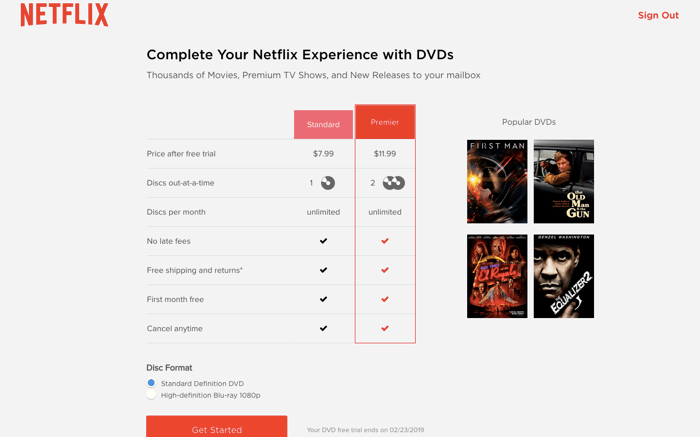 A dwindling group of DVD subscribers

By 2006, Netflix had racked up 6.2 million DVD-by-mail subscribers. The next year, it launched its popular online video service to supplement its original DVD service. The company didn't start offering an online-only subscription plan until November 2010, when it had about 20 million subscribers. Ever since, DVD-only subscribers have been dwindling. And now, nine years later, it has just 2.7 million DVD subscribers in the U.S., down from 3.3 million in the same period last year.

This past quarter, Netflix's domestic DVD division reported revenue of $85 million with a profit of $51.5 million, down from a $62.7 million profit a year ago. When you consider Netflix's overall revenue of $4.2 billion, this division is obviously small potatoes, but apparently Netflix doesn't want to cut it as long as it's making money.

Netflix actually split its DVD service off from its streaming service back in 2011 and it now operates under its own website, dvd.netflix.com. The business even has its own management team and headquarters in Los Gatos, California. In its heyday, Netflix operated 50 DVD shipment centers in the U.S.; now it has just 17, according to CNBC.

Today, the standard DVD plan is $7.99 a month and gives you unlimited rentals, but you can have only one disc rented out at a time. With the $11.99 premier plan, you can have two discs rented out at a time. There's also an HD Blu-ray DVD option, with a $9.99 standard plan and $14.99 premier plan. For all four plans, there are no late fees. (Legend has it Netflix was started after now-CEO Reed Hastings was charged a big late fee to return a video.) These prices are slightly cheaper than Netflix's streaming plans, which range from $8.99 to $15.99 a month following the January 2019 price increase.

Why do people still use the Netflix DVD-by-mail option?

While 2.7 million subscribers are a far cry from Netflix's nearly 140 million streaming subscribers, that's still a surprising number of people who are willing to wait for a DVD to arrive by mail. But there are a few benefits to the service.

First, there are nearly 100,000 DVD options, versus about 6,000 TV shows and films available on Netflix's streaming service. Second, new releases are typically available on DVD quicker than by streaming; a lot of times, new titles don't ever make it to the streaming site, hence the more limited options. And third, some customers are simply in spotty Wi-Fi areas and would prefer to have a smoother viewing experience by using DVDs instead.

How much longer will Netflix offer DVD subscriptions?

The short answer is that Netflix will probably keep its DVD operations running as long as they still make the company a little extra money. While the division made about $50 million last quarter, that's $10 million less than the same period just one year ago. At this rate, it seems like it might have another three years left at the most. However, Netflix said in the past that it plans to keep it running until at least 2025, a former employee told CNBC.

So while DVDs might seem to be obsolete, Netflix's profitable DVD business proves that there are still a number of people who prefer to keep things old school. And with about 100,000 titles to choose from, it's understandable why some believe the service is a better deal than the streaming plans. So if you're feeling nostalgic and patient, maybe it's time to dust off your DVD player.