Cybersecurity specialist FireEye (NASDAQ:FEYE) managed to beat Wall Street's expectations for the fourth quarter, but its results were overshadowed by disappointing guidance.

However, it wasn't that far off analysts' expectations. FireEye expects its top line to increase by 6.6% in fiscal 2019, which is slightly lower than the 7% increase analysts were expecting.

Additionally, the company expects to more than double its non-GAAP earnings to $0.19 per share. But investors apparently went in panic mode and the stock sold off big time, probably because they fear that the competition is getting the better of FireEye. Growth is the problem

FireEye's revenue increased 7% in fiscal 2018, which means that it expects top-line growth to dip slightly this year. The company's rivals have been growing at a far better rate. 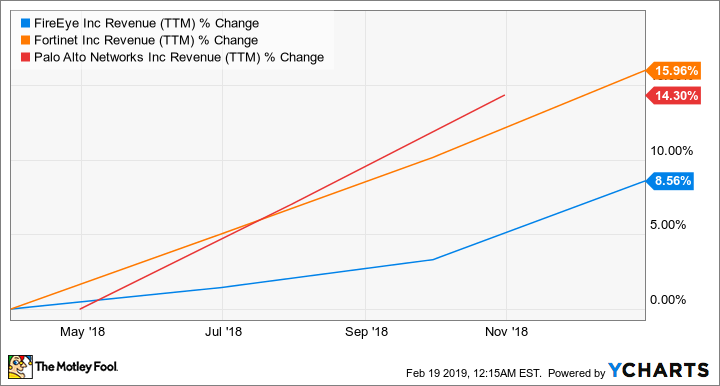 This makes Palo Alto Networks and Fortinet more attractive bets than FireEye, but that isn't the only reason investors seem to be turning against the latter. Check out their forward P/E ratios. 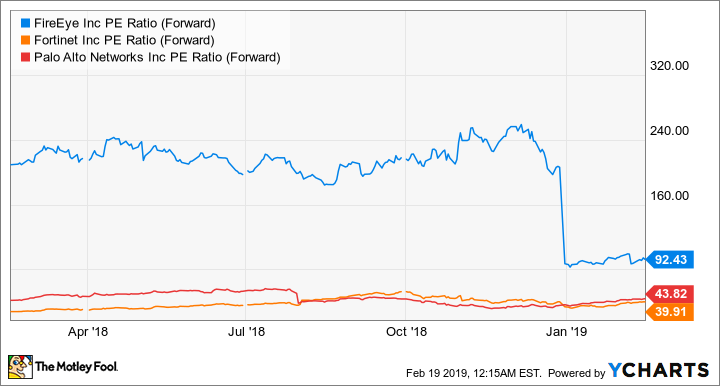 FireEye isn't a cheap stock. As such, it needed to grow at a faster rate in order to justify its rich valuation, but that won't be the case this year, and its post-earnings crash seems justified. However, a closer inspection suggests that FireEye's results were skewed by certain large transactions last year and the unpredictable nature of such deals caused it to issue weaker-than-anticipated guidance.

However, FireEye's business gained impressive momentum in the final quarter of 2018. It added 354 customers in the quarter as compared to 298 in the prior-year period. The number of $1 million-plus transactions also increased from 52 to 60.

Another important thing of note was the company's average contract length, which increased to 25.7 months during the quarter. The metric stood at 24.5 months in the prior-year period after excluding the impact of the two $10 million-plus deals. This indicates that FireEye's customers are signing longer contracts with the company, which bodes well.

Check out the latest earnings call transcript for FireEye.

FireEye's transition from a product-based revenue model to a subscription-based one is taking a toll on its top-line growth. Its product and related subscription and support revenue was nearly flat last quarter, while revenue from cloud subscription and managed services increased close to 13% year over year.

However, cloud subscriptions supply just 23% of the company's top line, so the faster growth of this segment is negated by the slower growth of the product-related business. This means that FireEye could struggle to boost its revenue at a faster pace in the near future, and because of that, it doesn't make sense to buy the stock given its valuation.

But the company's customer growth has picked up momentum, it is striking longer contracts, and the number of seven-figure transactions is also growing. As such, investors can keep FireEye on their watch list and wait for a better entry point.