5G wireless networks are starting to be rolled out by Verizon (NYSE:VZ) and AT&T (NYSE:T), with T-Mobile (NASDAQ:TMUS) and Sprint (NYSE:S) set to follow close behind. The next generation of wireless technology will not only be over 10 times faster than 4G, it'll reduce latency in connections, making the network appear even faster.

Some industries are already readying themselves for the 5G revolution by developing new technologies of their own. Here are the three innovations that I'm most excited about as 5G is rolled out. 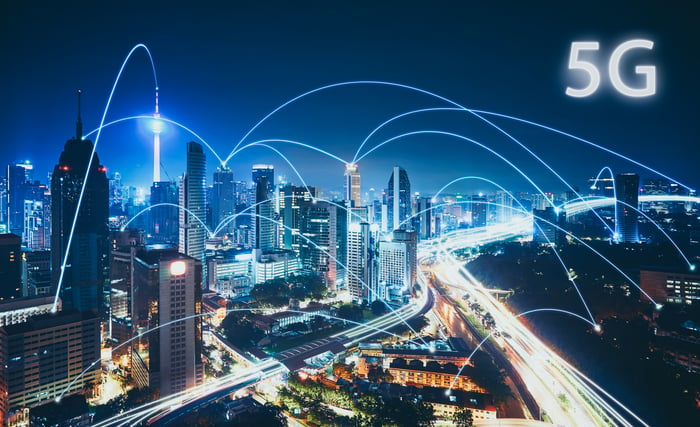 As self-driving vehicle technology moves up the autonomy levels to fully autonomous, we'll see more and more computing power moved to the cloud. 3D maps of cities will be uploaded to vehicles, traffic will be updated, and software updates will have to be pushed on a regular basis. All of this will take wireless speeds that only 5G can bring.

It isn't just downloading data that will require fast speeds for self-driving vehicles: Self-driving technology developers will want to collect data that vehicles are collecting to improve their autonomous learning. That'll involve collecting lots of data that's constantly being collected by vehicles, and the only way to get the data wirelessly will be 5G networks.

5G isn't going to be the only breakthrough self-driving vehicles need to hit the road en masse, but it'll be a key technology enabler for the industry.

When most people think of virtual reality's limitations, they think of the cords and expenses that go along with buying a headset. But I think a bigger limitation is the space modern graphics chips take up, their weight, and the heat they generate. If VR headsets could be primarily visual devices and offload computing power to the cloud, they could be wireless and more powerful. 5G will make that possible.

The VR industry is still in the early stages of rolling out any kind of 5G enabled products, and that will likely continue for a year or two, but companies are thinking about it. HTC (OTC:HTCKF) has announced a 5G Hub that it says will stream content directly to some VR headsets. The next generation of devices will connect straight from the headset to the 5G network, enabling a new wave of headset innovation.

It won't just be virtual reality that will be helped by 5G. Augmented reality and the entire XR (a catch-all term for augmented, mixed, virtual and other reality devices) ecosystem will likely rely on 5G before long. Facebook's (NASDAQ:FB) Oculus headsets, Magic Leap, HTC, and Microsoft's (NASDAQ:MSFT) Hololens will be a few of the headset manufacturers that will likely begin incorporating 5G into headsets in the next few years.

Check out the latest earnings call transcripts for Verizon, AT&T, T-Mobile, and Sprint.

The first 5G devices aren't going to be cellphones or VR headsets, they're going to be hotspots built for the home. Yes, broadband's next challenge isn't going to come from more fiber optic lines, it'll come from 5G wireless.

What'll be interesting to see is whether Verizon, AT&T, and T-Mobile begin pushing 5G for the home. As they build out 5G networks it will make sense to add these connections, but it's a different sales channel than these companies are used to, and it may be hard to bundle home 5G with wireless. But that's what they'll try to do where 5G is being built. For investors, at least, the 5G home is an incremental growth market that will benefit all wireless companies.

5G will change everything

Self-driving cars, wireless VR, and home 5G connections will be three of the early innovations that 5G will enable. But they're just the tip of the iceberg, and we don't know what innovators will develop once 5G is launched.

What I think we know from the potential of these products is that telecommunications companies will have a huge opportunity to increase the number of connected devices they serve. They may not be growth stocks today, but Verizon and AT&T will lead the charge into 5G, and I think that will drive growth for investors long-term.