Under Armour (NYSE:UA) (NYSE:UAA) recently hired Kasey Jarvis, former VP of product and design at Black Diamond Equipment (a mountain-sports gear outfitter), as its new chief design officer. Jarvis, who has nearly two decades of experience, previously held design roles at Nike (NYSE:NKE) and General Motors. He will replace Dave Dombrow, who had returned to the role in August 2016.

Under Armour's hiring of a new design chief indicates that the company wants to refresh its brand amid tough competition from rivals like Nike (NYSE:NKE) and Adidas (OTC:ADDY.Y). Yet investors and analysts didn't seem impressed.

In a note to clients (via Benzinga), Canaccord Genuity analyst Camilo Lyon pondered why Under Armour, which generated $5.2 billion in revenue last year, could only "take design talent from a company that did less than $200 million in sales last year." Lyon asked, "Why couldn't UA find someone from Nike, Adidas, or Lululemon?"

Lyon wrote that hiring Jarvis won't prevent UA from ceding more market share to rivals. But could UA pull off an unexpected comeback with fresh designs?

Check out the latest earnings call transcripts for Under Armour and other companies we cover.

Under Armour's design troubles started in early 2016, when Dombrow, then chief designer, left to take a job with Nike. UA had partnered with Golden State Warriors star Steph Curry to launch a new line of sneakers, but the company's release of the Chef Curry shoes shortly after Dombrow's departure were poorly received. The all-white Curry 2 Low shoes were endlessly mocked for looking like nurse shoes.

UA rehired Dombrow later that year, though has said that move wasn't a direct response to the Curry shoe debacle. However, Dombrow failed to revive interest in UA's flagship Curry shoes over the following two years.

The Curry 3 received a warmer reception than the Curry 2, but the Curry 4 was delayed in late 2017 and poorly received when it finally launched. The Curry 4's weak sales reportedly resulted in the dismissal of UA's footwear chief, Peter Ruppe, who had led the core business for nearly three years. Last year's Curry 5 was also criticized as a "downgrade" and a "step backwards" in terms of design. 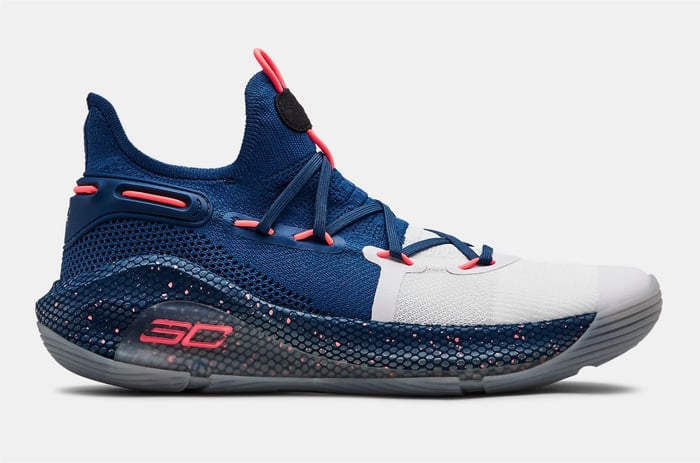 Nike also jumped on the foam bandwagon with its Epic React Flyknit shoes, and won back more shoppers with newer designs like the Air Max, VaporMax, and Max 270. Nike's aggressive marketing strategies and expansion of its e-commerce platform and brick-and-mortar stores also caused headaches for Under Armour.

UA followed these trends by launching its foam-based HOVR shoes and enlisting Dwayne "The Rock" Johnson to design its Project Rock Delta shoes, but those moves didn't boost its growth in North America, which generated over 70% of its 2018 sales. Here's how poorly UA has fared in that difficult market over the past four quarters:

To make matters worse, Under Armour's popularity faded among American teens, according to Piper Jaffray's semi-annual "Taking Stock With Teens" surveys. In its latest survey, teens ranked Nike and Adidas as their first and third favorite footwear and apparel brands, respectively, while Under Armour failed to make the cut.

Nike's and Adidas' North American sales rose 7% and 9% annually, respectively, in their latest quarters, and much of that growth likely came at UA's expense. Some of UA's weakness can be attributed to uninspired designs, but competition from Nike and Adidas, its lower-profile marketing and sponsorship campaigns, along with CEO Kevin Plank's polarizing embrace of President Trump in 2017 could also be throttling growth.

I won't judge Jarvis yet, but Canaccord Genuity has a point. It's odd that Under Armour, one of the largest footwear brands in the world, didn't snag a better-known designer to lead its turnaround efforts. Yet Plank is confident that Jarvis can inspire UA's team to "deliver beautiful, innovative design that the world's never seen before" -- so it's possible that the designer, with experience in auto, footwear, and performance equipment industries, may have some tricks up his sleeve.