The sports apparel and footwear maker is still losing shoe shoppers to rivals in its biggest market.

UA beat Wall Street's low expectations, and its growth seems to be stabilizing. For the full year, UA expects its revenue to rise 3%-4%, compared to its 4% growth in 2018 and 3% growth in 2017. However, it still expects its North American revenue to come in flat for the year, which indicates that it's still struggling in its biggest market.

Why is Under Armour struggling in North America?

UA was once considered the "next Nike (NKE -12.81%)" in North America, but the bankruptcies of a couple major sportswear retailers and new expansion efforts by Nike and Adidas (ADDYY -5.31%) derailed its growth.

For the full year, UA's North American sales fell 2% to $3.7 billion, or 71% of its top line. That represents a slight dip from 76% in 2017, and indicates that UA needs to grow its international businesses more aggressively to offset that weakness.

During the conference call, COO Patrik Frisk stated that the North American business was "at a point of stabilization" with a "cleaner and tighter" inventory. Frisk noted that UA pricing and promotional activities were "normalized at lower levels than just two years ago."

CFO Dave Bergman stated that UA cut its promotional activity in North America by "about one-third" compared to 2017, which "created a more difficult comp in the second half of the year." Bergman mainly attributed the region's 6% sales decline to the contraction of UA's wholesale business and lower sales to its off-price channel. In other words, UA cut its promotions to protect its brand appeal and margins, but those strategies impacted its sales growth.

How are Under Armour's rivals faring?

In previous years, UA blamed its North American woes on the saturated footwear market and retailer bankruptcies. However, most of UA's rivals generated stronger growth in North America in their latest quarters. 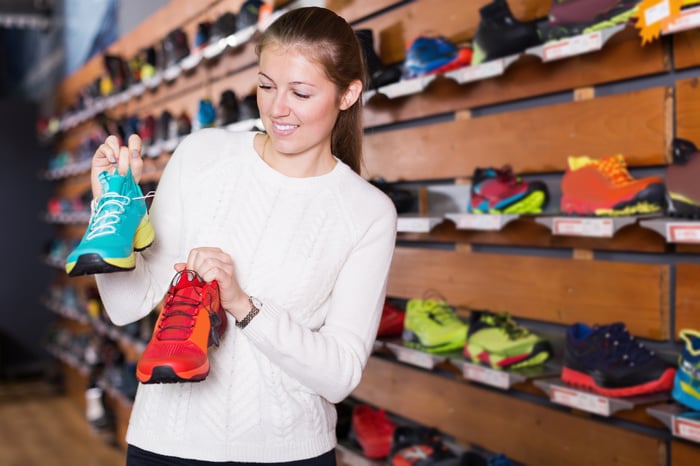 Looking ahead, Under Armour will likely struggle to counter Nike and Adidas' aggressive direct-to-consumer expansion strategies, which include new brick-and-mortar stores, e-commerce expansions, and marketing blitzes.

The growth of UA's international business looks promising, but it's simply not big enough to offset the company's problems in North America yet. UA expects its home market's sales to stabilize this year, but I think it could be tough to counter the competition from Nike and Adidas while expanding its gross margins.