While news media coverage and investor attention often drift to small-cap stocks for their explosive growth or to large-cap stocks for the big moves and big headlines, mid caps deserve more attention! Mid-cap stocks can offer greater growth than large caps, and with less risk than small caps -- a smart balance for many portfolios.

If you're short on mid-cap ideas, you're in luck. Here are three Motley Fool contributors who think Carvana (NYSE:CVNA), Cullen/Frost Bankers (NYSE:CFR), and H&R Block (NYSE:HRB) would be solid additions to many portfolios.

Daniel Miller (Carvana): If you're looking for intriguing mid-cap stocks, you might recognize this used-car retailer from its advertising. Carvana, known for its e-commerce platform and unique car vending machines, is a mid-cap stock that has posted incredible growth and has room to run. 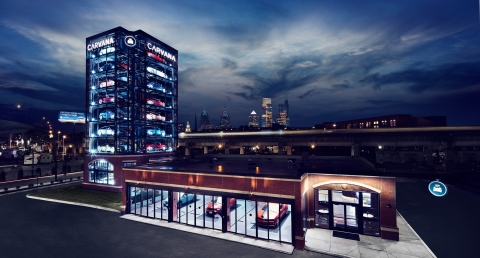 The good news is that Carvana's growth has room to run. One core reason is simply that consumers dislike the traditional buying process and are increasingly turning to online options, such as Carvana. According to a DealerSocket report, 81% of consumers do not enjoy the car buying process, and only 8% of consumers rated car salespeople as highly trustworthy in a Gallup Poll. In Carvana's favor, 97% of consumer purchases involve online research and 75% of people would consider purchasing a car online, according to an Accenture digital survey. Furthermore, over 24,000 customer reviews on Carvana.com rank the company 4.7 stars out of 5, and 96% would recommend it to a friend.

It's pretty simple: Make car buying faster, easier, and more enjoyable. It's clear from the company's growth and previously mentioned surveys that it's providing consumers with a valuable service. If Carvana continues to expand its footprint, while increasing its gross profit per unit, there's plenty of room to run for this mid-cap stock.

Do mess with Texas

Jordan Wathen (Cullen/Frost Bankers): Even as banking moves online, the industry remains a highly local business, driven by the economic environment in the cities and towns in which a bank takes deposits and makes loans. As the largest Texas-based bank, Cullen/Frost Bankers is almost a pure bet on the favorable economic climate in that state.

Texas often leads the United States in net migration, meaning more people move to Texas each year in search of high-paying jobs, low costs of living, and low taxes than leave for other states. Some locales, like Austin, are particularly hot, drawing an educated workforce and meaningful jobs.

A true relationship bank, Cullen/Frost focuses on small and midsized commercial clients who value the ability to work with a smaller institution where their business is needle-moving to their banker and their bank. Cullen/Frost is a direct beneficiary of Texas' business-friendly environment. Roughly 88% of its loan portfolio consists of commercial and industrial (C&I) and commercial real estate loans. Strong relationships with area businesses help Cullen/Frost avoid competition on deposit rates. Roughly 40% of its deposits are non-interest-bearing.

Its credit record is exceptional, a testament to its ability to manage risks in an economy that can run hot and cold thanks to its outsize exposure to the oil industry. But this bank doesn't take on unnecessary risk, as it keeps the bulk of its assets in super-safe securities, allowing it to take calculated risks in its smaller-than-average loan portfolio. Shares command a slight premium to larger banks, trading for about 13.5 times earnings, but the premium price is worth it for a high-quality bank in an attractive geography.

Profit from the tax law

Jeremy Bowman (H&R Block): If you're confused by the Tax Cuts and Jobs Act, the 2017 law that slashed the corporate tax rate among several other changes to the tax code, you're not alone. A NerdWallet survey found that half of Americans were not even aware that the new tax law had taken effect, and smaller-than-expected tax refunds sparked taxpayer ire earlier in the tax season.

In such an environment, consumers are likely to turn to tax prep services like H&R Block. And indeed, the company said that it noticed a trend in consumers trading up from its DIY product to its Tax Pro Review product, which includes a check from a qualified tax preparer.

Still, H&R Block maintained its full-year outlook in its third-quarter report, which it released on March 7, calling for revenue to decline slightly from $3.16 billion last year to a range of $3.05 billion to $3.1 billion. But if there is a rush to tax-prep services at the end of the season due to confusion over the new law, H&R Block is likely to be a beneficiary.

While they wait for the results from tax season, investors can sit back and collect a 4.2% dividend yield. H&R Block won't deliver its full-year earnings report until June, but the company generally provides an update on tax season the week after the April 15 deadline passes. With a low P/E of just 7.3, the stock could jump if results prove to be better than expected.